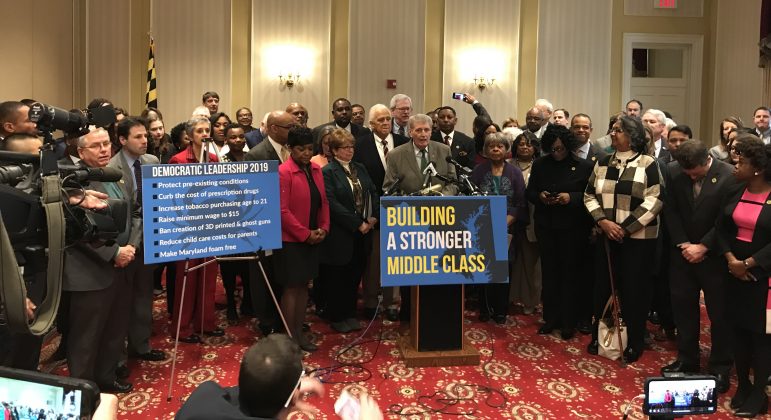 DEMS UNVEIL LEGISLATIVE PRIORITIES: Maryland’s Democratic lawmakers unveiled their to-do list for the 2019 General Assembly session on Tuesday, including a pledge to ban the use of plastic foam, raising the minimum wage and cutting prescription drug costs, Pamela Wood reports in the Sun.

MEDICALLY ASSISTED SUICIDE: After several years of failure, proponents of legalizing medically assisted suicide in Maryland believe they’ve got a better chance this year. Pamela Wood of the Sun reports that dozens of people, many of them senior citizens, descended Tuesday on Annapolis, wearing yellow T-shirts from Compassion & Choices. The Portland, Ore.-based organization promotes what it calls “expanded options for compassionate dying. ”

PREVIEW OF HOGAN’s STATE OF STATE: Pamela Wood of the Sun writes that Gov. Larry Hogan will deliver the first “State of the State” speech of his second term — and his fifth such speech overall — on Wednesday. She offers up a few things that you need to know.

HIGHEST EARNING LOBBYISTS: For the fourth year in a row, Tim Perry and his lobbying firm remain the highest paid lobbyists in Annapolis, according to annual reports from the State Ethics Commission. Len Lazarick of MarylandReporter writes that Perry earned almost $2.4 million and the partners at Perry White Ross & Jacobson took in twice that amount, $4.8 million. Based on calculations by MarylandReporter.com, companies, trade groups and organizations spent $44 million on 153 lobbyists — counting only those making $50,000 or more as reported to the state, a few more than last year.

CYBERBULLYING BILL CONCERNS FREE-SPEECH ADVOCATE: Legislation to expand Maryland’s law against cyberbullying of youngsters drew criticism Tuesday from a free-speech advocate, who was in the unwelcome position of testifying after parents whose teenage daughter was driven to suicide by online harassment, Steve Lash reports for the Daily Record.

STATE AGENCY SETTLES EEOC SUIT: The Maryland Insurance Administration has agreed to settle a lawsuit filed by the U.S. Equal Employment Opportunity Commission that accused the agency of paying three female fraud investigators less than their male counterparts for the same work, Ovetta Wiggins of the Post reports. The disparity violated the federal Equal Pay Act, the lawsuit said.

HOGAN PREZ WATCH: Ovetta Wiggins of the Post gives an overview of Gov. Larry Hogan as he is being courted to possibly run against President Trump in the Republican primary. Hogan is one of the most popular governors in the country.