“Why will you ask for other glories when you have soft crabs?”
— Oliver Wendell Holmes, chiding Baltimore in an 1860 essay

Nowadays, around 350 million to 450 million blue crabs inhabit Chesapeake Bay, according to accurate surveys. That’s not harvests, mind you, but all crabs — soft and hard, from thumbnail size up. It supports fishing that both watermen and chicken-neckers are fairly happy with.

But how happy should we be? Should we expect more in our quest to restore the estuary’s health?

Consider: In 1883, W. K. Brooks, a Johns Hopkins scientist who studied the Chesapeake closely, found Virginia hard crabbers routinely making up to two dollars a day, selling their catch for a penny a dozen. That translates to around 20 bushels — and they were using sail power or rowing only, running trotlines, working only the Bay’s shallow fringes. Crab pots, which would have let them harvest deeper water, hadn’t been invented.

And they were knocking off work by around 10 a.m. — noon at the latest.

Hard crabs, Brooks wrote, had so little value that fish netters shook them from their meshes, leaving thousands crushed and dying on the shorelines.

As for soft crabs, which had begun to fetch a decent price, the town of Crisfield in high harvest would ship 180,000 of them a day in 1909, with Deal Island adding another 50,000 a week. In 1916, as many as seven railroad cars of fresh softies rolled out of Crisfield some days. 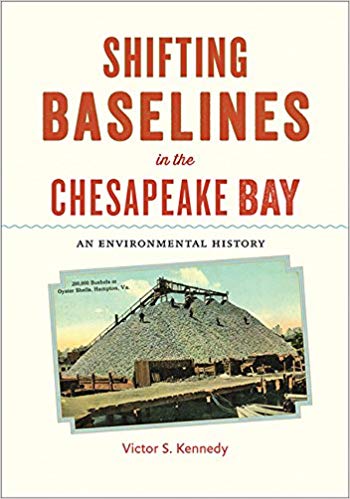 These crab stories are told by retired University of Maryland scientist Victor  Kennedy in his new book, “Shifting Baselines in the Chesapeake Bay: An Environmental History (Johns Hopkins Press).”

Kennedy has examined the Bay’s past abundances of seafood, from terrapins and sturgeon to oysters and shad and waterfowl, sifting through anecdotal evidence and early surveys to arrive at a sense of just how full of life the Chesapeake was as Europeans began to settle it.

His book also pulls together an accounting of how thoroughly we squandered the “immense protein factory” praised by Baltimore journalist H. L. Mencken.

Such forgetfulness can happen quickly. In the 1980s, the late Martin O’Berry — who for decades captained research vessels for the University of Maryland — had tears in his eyes when he told me how frustratingly impossible it was during fish surveys to make politicians, environmental managers and young scientists understand just how enormously abundant the Bay had once been.

They were thrilled with the marine life that came up in O’Berry’s trawls. He’d explain how it paled in comparison to what similar trawls yielded just 25 or 30 years before — before the big declines in seagrasses and oxygen hit the Chesapeake. “But they just didn’t get it,” the old captain said. “You [can’t] know what you never saw.”

So Kennedy’s fine and readable effort, released in late November, does a real service as modest upturns in Bay water quality have us daring to think about what a “saved” Chesapeake might look like. It’s not just about quantity. The book describes oysters stretching almost continuously for 140 miles along the Eastern Shore from Kent Island to Cape Henry in 1869.

But that was grossly unlike the original state of oysters in the Chesapeake, Kennedy writes; rather it represented the efforts of 1,700 dredge boats and 3,000 tongers working at the time in Maryland alone — breaking apart the dense but widely separated reefs in which oysters naturally occurred — and scattering the mollusks far and wide.

For a time, this scattering must have seemed an improvement, as oysters, freed from their reefs, grew fuller and fatter and easier to harvest. Now we know it also made them more vulnerable to covering by sediment, and it destroyed the massive capacity of the reefs, themselves, to harbor myriad other Bay life.

Perhaps though, it explains the belief, deeply held to this day by oystermen, that “working” the bottom is vital to healthy oysters, even as science guides us toward establishing sanctuaries where reefs can once again form.

Bounty of fish, waterfowl made a difference

A provocative final chapter examines how the pre-European Chesapeake may have been different ecologically as a consequence of its bounty. Shoals of spawning fish, so vast they created waves coming upriver that were visible at a distance, were bringing into the estuary massive amounts of nutritional energy harvested from the oceans, in their flesh, feces, urine, mucus.

Likewise for the sky-darkening flights of waterfowl, whose nightly noise likely kept native humans awake, and whose taking flight could be heard miles away. From across the continent they brought in their bodies and their wastes, significant energies to fuel Bay food webs.

Perhaps a lot of the nitrogen that now fuels too much algae in the modern Bay was tied up then in the living tissues of all of those fish and birds.

“You cannot manage what you do not understand,” the author says; and this book moves us toward understanding better the great gift that was Chesapeake Bay.

Tom Horton has written about Chesapeake Bay for more than 40 years, including eight books. He lives in Salisbury, MD, where he is also a professor of Environmental Studies at Salisbury University.