Listen to this article
By Chris Cioffi
Capital News Service

After a 2016 flood destroyed Great Panes Art Glass Studio on this city’s Main Street, the owners resolved to rebuild.

Sherry Fackler-Berkowitz, 65, has run the business in the historic mill town with her husband Len Berkowitz, 74, for 40 years. They have owned a stone-and-stucco building where their studio is now for 35 years.

But after a second flood earlier this year destroyed their studio again, the Berkowitzes want out. They and other business owners are now stuck in limbo as arguments rage over the future of quaint and picturesque Ellicott City.

Fackler-Berkowitz said she and her husband believed buyout money was coming — part of a five-year plan approved by Howard County in October to purchase and raze hers and nine other buildings on lower Main Street. The plan also includes other infrastructure enhancements to protect the area from flooding.

The move was seen as controversial by preservationists and others, and has now been put on hold temporarily by Democrat Calvin Ball, who was sworn in Dec. 3 as the new Howard County executive.

The decision by Ball to tap the brakes on the plan comes amidst a broader debate over how Ellicott City can maintain its historic atmosphere and still protect itself against future disasters.

Some residents and others have partly blamed upstream development for the recent devastating floods. Others have backed more expensive proposals that call for saving the buildings but constructing additional water-slowing infrastructure upstream.

Many experts say the problem is more complicated than just development — a combination of unique topography, urbanization, climate change and bad luck. They say that no matter how much infrastructure is built, there’s no guarantee another catastrophic flood can be prevented. 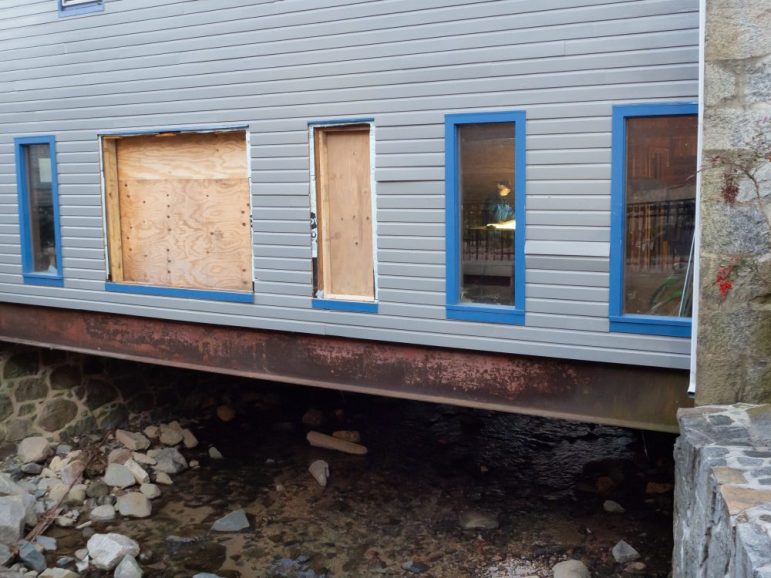 Historic Ellicott City sits at the confluence of three streams — the Hudson, Tiber and New Cut branches at the bottom of a steep slope. The watershed is small. It covers about four square miles.

The Berkowitz building sits on top of the Tiber River, and it dates back to the 1800s. The Tiber is steps from its confluence with the Patapsco River.

In 2016, a rainstorm caused the Tiber to swell and inundate the first floor of the building with eight feet of water.

The couple spent about $260,000 — including a $50,000 no-interest loan from the state and a line of credit on their Columbia home — gutting and completely remodeling their business.

The remodel included a concrete slab floor, larger windows, flood remediation in the building’s two apartments and a new climate-controlled area for a second business tenant on the first floor.

“We figured we had to do it,” she said. “We assumed we wouldn’t have to gut the building again, so it was worth the money.”

Then the May 27 storm rumbled through, dumping about five inches of rain in less than two hours and creating a muddy wave of water that blew out those new windows in the Berkowitz building.

The water also dragged items like crates of glass bolted to walls and a 150-pound desk out of the building and down the river, Fackler-Berkowitz said.

Joan Eve Shea-Cohen, owner of Joan Eve Classics &amp; Collectibles and Fackler-Berkowitz’s business tenant, had to break out a window with an antique candlestick phone and climb to safety.

The Berkowitzes held flood insurance for most of the time they owned the building. But in January of 2016, their rates jumped considerably, Fackler-Berkowitz said. They decided to discontinue their policy and shop around for a newer, cheaper one. They were without insurance when the flood occurred in July.

The Ellicott City area has grown since the mid 1980s, said Joe Sexton, chief scientist at terraPulse and an associate research professor at the University of Maryland’s Department of Geographical Sciences.

TerraPulse, a satellite-based mapping company, examined municipal data between 1984 and 2010 in a large area including Baltimore and Washington, D.C. Then the team used a computer program to identify areas on satellite images that were transformed from fields and forests to buildings, parking lots, streets and other surfaces that don’t allow the natural absorption of rain into the soil.

“The total area developed over the 27-year period was approximately 243 square kilometers, which is larger than the municipal area of Baltimore,” Sexton said.

Howard County has required builders since the 1980s to include stormwater management infrastructure in their projects. About 40 percent of the development in the Ellicott City watershed has occurred since 1991, according to the county.

A report commissioned by Howard County after the 2016 flood concluded that Ellicott City would be vulnerable to flooding, even if the area was undeveloped.

These storms are different

Before 2016, one of the most memorable floods to hit Ellicott City occurred in 1972 during Hurricane Agnes, which caused the Patapsco to swell and back up into town.

The flooding in 2016 and 2018 came from above, and the water ran downhill.The events are classified as 1,000-year storms, not because they would be expected to occur once every 1,000 years but because they have a 1-in-1,000 chance of occurring,

“Any stormwater management control would be overwhelmed by the rain we saw in Ellicott City in 2016 and 2018,” said Matthew Baker, a professor in the Department of Geography and Environmental Systems at the University of Maryland, Baltimore County.The flood was so massive that the Patapsco River gauge in Catonsville, less than four miles from Ellicott City, sent readings seen when the entire Patapsco floods, Baker said.

“The amount of water coming off the land was tremendously high,” he said. “We’ve never recorded anything like it in the mid-Atlantic region.”

The plan to mitigate flood risks by demolishing structures, which sit directly above or very close to the Tiber, was opposed by groups like Preservation Maryland. The group expressed concern that tearing down the historic structures could cause Ellicott City to be delisted from the National Register of Historic Places.

The group did say it supported parts of the plan that called for flood mitigation projects upstream.

Paul Milton, a special assistant to former Howard County Executive Allan Kittleman, said in an interview before Ball was sworn in that the plan to remove the buildings is an important part of reducing the risk to human life and property damage.

“We’re not backing away from our plan, and if the circumstances were different, we would be moving forward with it,” Milton said.

Ball has said he will continue moving forward on the upstream projects, but has delayed purchasing and removing the buildings.

The Berkowitz business now operates in one of the building’s second-floor apartments.

When they need to lay out glass to show a design to customers, the couple dons hats, coats and gloves to work in their now-unheated shop.

Some of the unbroken windows still have brown mud in the corners, and a waterline can be seen on some of the ducts that hang from the ceiling.

Her business tenant, Joan Eve, has not returned.

The couple purchased another property a few miles from the town, and was weeks from breaking ground on a new studio and home. But because the money they were promised to buy them out of the loans they took out in 2016 has not arrived, their plans are delayed.

“We’re going to just stay in our building until something else works out,” Fackler-Berkowitz said. “We’re just kind of stuck there. We can’t really do much else with it.”

Fackler-Berkowitz said she is “kind of angry” the county finally made a plan but has changed its mind. And she worries the plan may not be implemented before another major flood hits.

“Ellicott City can’t wait,” she said. “We need to move forward, and we need to move quickly to keep us from losing everything we have.”