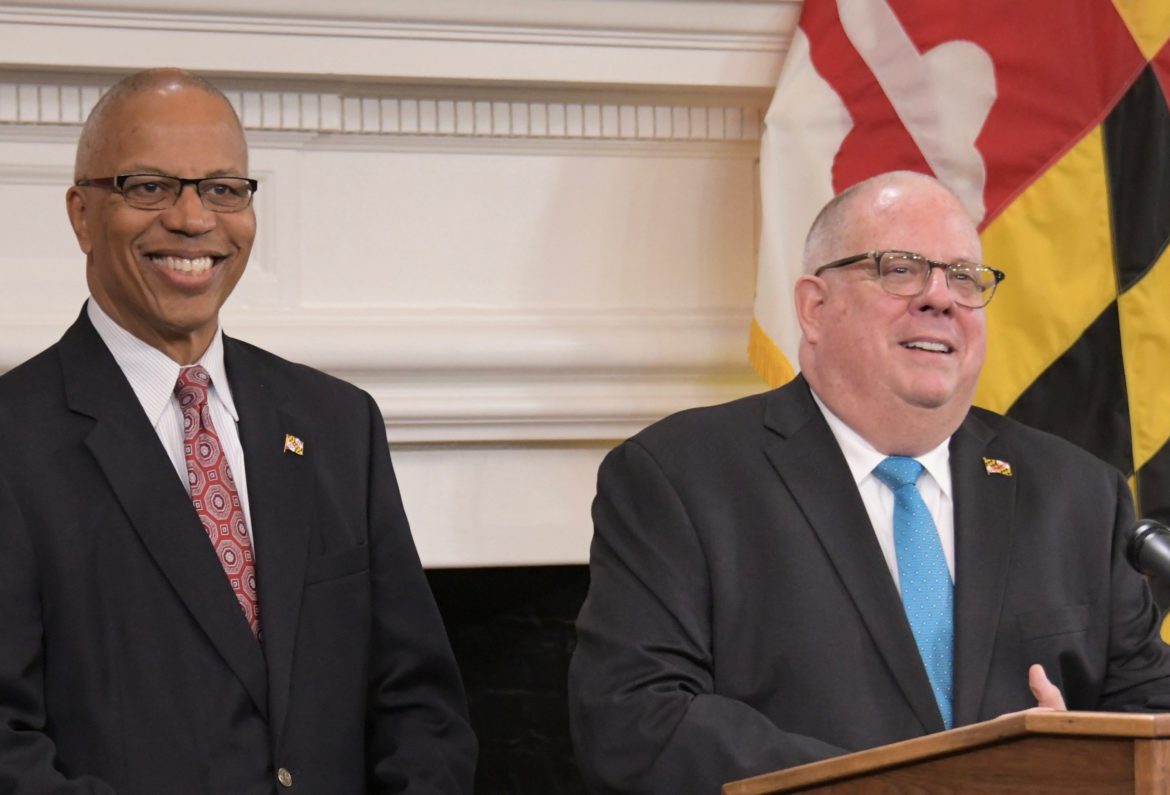 Hard not to smile Wednesday as Gov. Larry Hogan and Lt. Gov. Boyd Rutherford spoke to reporters and staff after their big election win. Governor's Office photo by Joe Andrucyk.

By Lindsay Huth
Capital News Service
Gov. Larry Hogan’s victory Tuesday by many measures was more decisive than his win 2014. He captured 51% but won with 56%, rivaling the only other Republican governor to have won re-election in Maryland history, Theodore McKeldin in 1954.

Hogan pulled off his victory by appealing to voters outside his party and gaining more votes from the increased turnout at the polls.

1. Hogan picked up a greater proportion of the vote in every county than he did in 2014.
Across Maryland, Hogan’s showing improved over the last election. Both years, he won all but four jurisdictions: Charles, Montgomery and Prince George’s counties and Baltimore City.

He even approached a near-majority in Montgomery County, where he increased his pull from 37% last election to 44% this year.

2. Voter turnout increased in every county.
Marylanders cast more votes in this year’s governor’s race than in the previous gubernatorial election. Turnouts increased by anywhere from 4 to 35%.
The biggest boosts came in Prince George’s and Montgomery counties, where Hogan also got a greater proportion of the vote this year.

3. Hogan got a greater proportion of those new votes.

Marylanders cast 400,000 more votes in the governor’s race this year than in 2014 — an underestimate, since absentee ballots have yet to be counted. The total number of votes cast for Hogan increased in every county.

Hogan’s dominance was so significant that despite the increase in turnout, Democrat Ben Jealous got fewer votes in 11 counties than Anthony Brown did four years prior.

It was the year of the “blue wave,” but as Hogan proclaimed at his victory party on Tuesday: “It turns out I can surf.”

To win reelection in a state where registered Democrats outnumber Republicans by a more than two-to-one margin, Hogan had to appeal to voters outside his party.

While voting data don’t show how many non-Republicans cast votes for Hogan, we know that he garnered a significant number of voters from outside his party in at least 14 counties, where the number of votes cast for Hogan exceeded the total number of registered Republicans living there.

The biggest difference was in Montgomery County, where Hogan got 45,578 more votes than there are Republicans living in the county.

5. Hogan got a greater proportion of early votes, too.

Despite his 2014 win, Hogan actually lost that race among early voters. Not this year.
With the increased turnout this year, both candidates garnered more early votes, but Hogan captured the majority, helping catapult him to victory.

At his victory party at the Westin hotel in Annapolis Tuesday night, Hogan thanked his supporters for his decisive win.
“They said it was impossible. They said it couldn’t be done in Maryland but thanks to you we just went out and did it,” he said.

At theiir post-election news conference Nov. 7, the room was filled mostly with staff and family, with reporters in the lower right and behind the cameras. Governor’s Office photo by Joe Andrucyk