State Sen. Gail Bates is asking for answers about a breach of security at Howard County  Courthouse involving Register of Wills Byron Macfarlane at the end of September.

Howard County Sheriff’s Office deputies found a group of 15 to 20 in the courthouse with an access pass from Macfarlane, said Major Donald Knott, chief deputy. At the time the courthouse was closed and Macfarlane was not present.

The sheriff’s office did not deem it a criminal matter but referred the security breach to the administrative judge of the circuit court. A spokesperson for the court system would not comment.

Macfarlane, who is up for reelection Nov. 6 in an election where early voting has already begun, provided a statement Wednesday. Macfarlane, a Democrat, has been Register of Wills since 2010.

“The timing of this allegation is highly suspect. We are just days before an election and this appears to be politically motivated,” Macfarlane stated. “I cannot comment further except to say this simple matter has been fully resolved by courthouse leadership.”

Macfarlane declined to explain what exactly happened Sept. 30, though in his statement he blames political opponents for what had been Republican chatter on social media for weeks.

Bates, a Republican, sent a letter Monday to Judge William V. Tucker, the administrative judge for Howard County, saying she is “deeply concerned by this breach of security at a state building in my district.” She sent a copy of the letter to Maryland’s top judge, Mary Ellen Barbera.

“In addition to the obvious danger unauthorized individuals could pose to the physical security of the Courthouse, the individuals who were present could have tampered with files and other sensitive materials or could have allowed others – intentionally or unintentionally – to do the same if a Sheriff’s deputy did not intervene,” Bates stated. “This unauthorized access could have endangered the ability of our justice system to render a fair judgment on pending cases.”

On Sunday Sept. 30, a sheriff’s deputy found the group during normal rounds of the courthouse.  They were in and near the Register of Wills office, which is very close to the entrance of the courthouse, and left after the deputy spoke with them. They were not searched for weapons and the deputy did not collect names of individuals present, Knott said.

“(The deputy) learned that the group had gained entry to the building using an access card that was provided to them by an elected official, who is independent of the Circuit Court. The official was not present,” a statement from the Sheriff’s Office said. “Nothing inside the building appeared to be disturbed, and the group’s movements were limited to the lobby area and the elected official’s office.”

Bates said Wednesday that she contacted Tucker on behalf of constituents asking her, and had not yet heard back. She has serious issues with people accessing the courthouse without proper security, she said.

The letter was sent in postal mail, so she said the judge may not have gotten it yet.

Judge Tucker’s office referred questions to the media office of the state Judiciary, which declined to say if any security measures had been put in place as a result of the incident.

She also did not answer a request for the policies for violating recording device limitations. 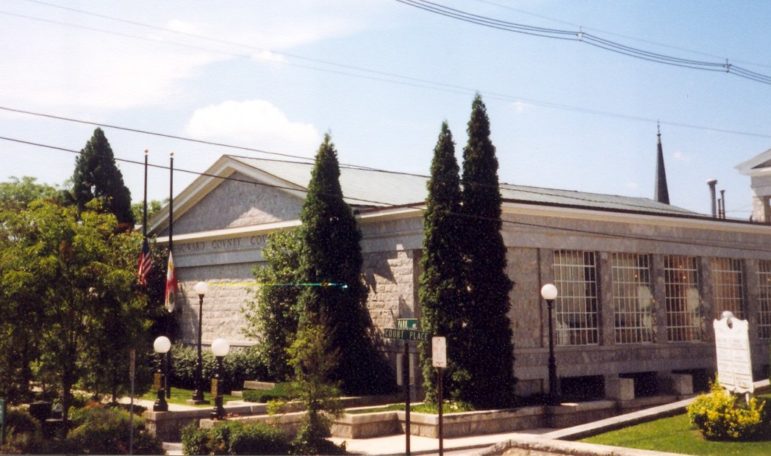 Side of Howard County Courthouse where main entrance currently is. Photo by Jimmy Wayne with Flickr Cretive Commons License

Analysis: This Reporter looks at woolly caterpillars and cheesy T’s