To the sound of shouts, loud applause and a few boos, the candidates for Howard County executive came out swinging at a debate Wednesday night sponsored by the YMCA and the NAACP, much as they had in a quieter but equally combative debate for the League of Women Voters last week.

On stage at the Ellicott City Dancel YMCA, the candidates were forceful but did not cross the line in a county where bumper stickers promote its “Choose Civility” program. But the crowd of about 250 was not so polite as blue-shirted Ball supporters clapped and hooted for their guy, while the slightly more subdued Kittleman contingent in yellow shirts cheered and applauded vigorously.

Kittleman touted his own accomplishments as executive, while criticizing some of Ball’s voting record, particularly approving increased development. Ball was equally critical of Kittleman’s record. “I think we can do better,” Ball said. 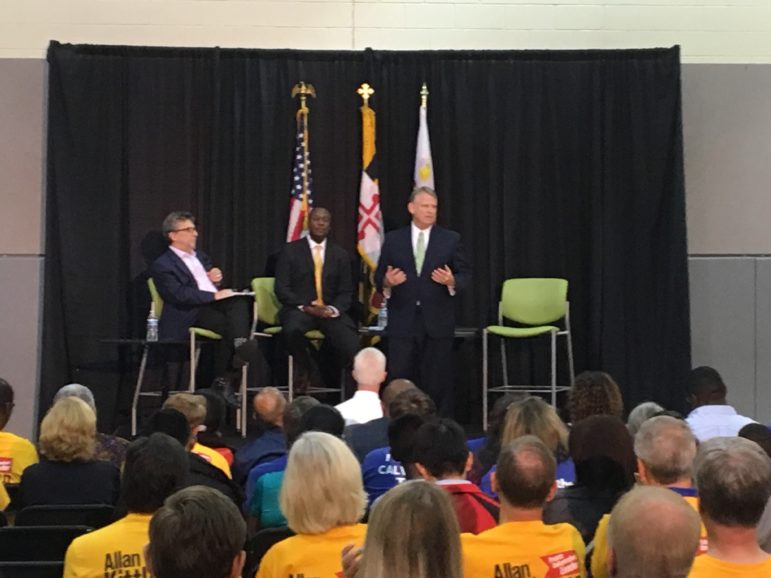 Howard County Executive Allan Kittleman speaks to the audience of about 250 in Ellicott City. MarylandReporter.com

The aggressive performance by the two candidates came as the Ball campaign pushed back against an independent Mason-Dixon poll showing Kittleman with a substantial lead in the race, winning 53% to 37%.

The Ball campaign released its own internal poll by the Garin Hart Yang Research Group showing a much closer race, with Kittleman ahead only 46% to 43%.

The polls were done a week apart in September. Kittleman’s pollster released some numbers from an August poll showing the race with results similar to Mason-Dixon’s, with Kittleman leading 52% to 37%.

Both Ball’s poll and Kittleman’s showed Ball with an edge on the issue of education, a topic Ball has stressed throughout his campaign. He accuses Kittleman of underfunding a school system considered one of the best in the state and the nation. “We need a county executive who advocates for more funding in Annapolis,” Ball said.

Moderated by talk show host Marc Steiner, who allowed for a free-wheeling back and forth, the candidates tangled on the same issues as they have over Kittleman’s four years as executive.

Steiner noted that both candidates had taken money from developers. Ball used the question as an opportunity to criticize Kittleman’s opposition to public campaign finance legislation. Voters eventually approved the charter amendment passed by the council in 2016.

Kittleman was quick to note that the campaign finance law does not go into effect until 2020, and that he supported public funding if it came from voluntary contributions, but did not force taxpayers to fund candidates they may not support. “That’s wrong,” Kittleman insisted.

The candidates sparred again over Ball’s legislation to make Howard a sanctuary county. Kittleman vetoed the bill, and said it unnecessarily scared people since county police were not pursuing undocumented immigrants. Ball said that there were many county residents still scared about their immigration status.

Ball also reiterated his opposition to the new county courthouse to be built with a public-private partnership just north of Route 108, saying the cost was too high and takes money away from funding for schools.

Here is a link to the video of last week’s League of Women Voters debate. Erin Logan reported on last week’s debate for the Howard County Times.

Eat, drink and be driving — but don’t read your text messages at the wheel