A heron rests calmly on a rock below Conowingo Dam as water from the dam’s floodgates roils in the background. Bay Journal photo by Dave Harp

Summer ended much as it began across the Chesapeake Bay watershed, drenched in rain that swelled rivers and streams. The abnormal run of chronically wet weather that continued into late September posed further challenges for maintaining recent gains in the Bay’s health.

Freshwater flows into the Bay in August were the highest recorded for that month by a wide margin, the U.S. Geological Survey reported. And although Hurricane Florence didn’t bring nearly as much rain to the Bay watershed in September as it dumped on the Carolinas, it produced enough to make Conowingo Dam open some of its floodgates yet again.

“The effects of Florence will be relatively short-lived to the Bay,” predicted Scott Phillips, USGS Chesapeake Bay coordinator, as the storm approached. But he said the above-normal river flows that persisted from late spring through summer could have longer-term impacts on underwater grasses, the Bay’s water quality and fish populations.

Even before Florence hit, much of the mid-Atlantic region was experiencing the wettest year on record, or nearly so, according to the National Oceanic and Atmospheric Administration, with much of the watershed receiving two to three times the normal amount of rainfall from May through July.

Maryland saw record levels of precipitation through that period, while Pennsylvania had its wettest July since recordkeeping began 124 years ago.

River flows ran higher than normal across the Bay watershed from late spring through summer. A series of downpours in late July produced a peak flow at Conowingo Dam on the lower Susquehanna River of 375,000 cubic feet per second.

Then, as summer drew to its damp conclusion, a weakened Florence soaked the Susquehanna watershed, driving river flow at the dam back up to around 200,000 cfs on Sept. 20. The dam opened 10 of its floodgates that day to spill the rising water downriver into the Bay.

Though river flows this year haven’t reached the peaks brought by past tropical storms or spring thaws, managers opened the dam’s floodgates 87 times by Sept. 24, more than any year since 2006, said Deena O’Brien, spokeswoman for Exelon Corp., which operates the hydroelectric facility at the dam.

The high flows washed sediment and nutrients from lands across the watershed into a Bay already suffering from an excess of both pollutants.

As a result, oxygen levels in the Bay’s waters have fluctuated through the summer. The Maryland Department of Natural Resources reported that hypoxic, or low-oxygen conditions, were worse than average in June. Conditions improved in July, in large part because windy storms had turned the water over, mixing oxygen back in. But in August, the DNR reported, the extent of low-oxygen water — where fish, crabs and shellfish struggle to survive — had dropped to near normal levels.

Even without the oxygen problems, the surfeit of freshwater into the Bay likely affected the survival of oysters and clams in upper portions of rivers, as well as the distribution of fish that favor either saltier or fresher waters.

The storms and resulting high flows also have brought waves of trash and debris into the Bay, littering shorelines and the water as well as posing navigation hazards for boats. After the late July storms, which yielded a bumper crop of debris in much of the Upper Bay, Maryland Gov. Larry Hogan wrote to Exelon asking for help in dealing with it.

Exelon officials have sued Maryland for requiring what it considers unreasonable conditions on its continued operation of the hydro facility, including keeping any debris from passing over the dam. In a letter in response to Hogan, the company pointed out that the pollution and debris came from upriver in the Susquehanna’s watershed. 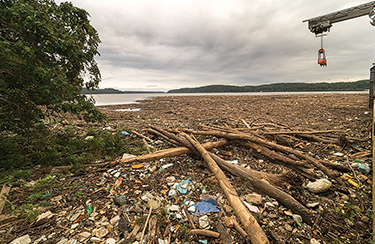 Detritus collects in a corner of the large pool behind the Conowingo Dam. Bay Journal photo by Dave Harp

Tons of debris from upriver

Though debris is carried downriver when floodgates are open, much of it is trapped behind the dam, where it forms a vast raft of detritus. Plastic bottles, tires, foam coolers, soccer balls and even a few hot water heaters and propane tanks are mixed in among the tree branches and other floating wood.

Exelon employees have removed 1,800 tons of floating debris at the dam so far this year, three times what they take out in a normal year, according to Exelon spokeswoman Lacey Dean. The debris is sorted and as much as can be is recycled, said O’Brien, another Exelon spokeswoman.

“I know we’re looking at what morewe can do,” Dean said. But, she added, “People need to take care of their trash.”

Beyond the unsightly litter, the repeated pulses of sediment and nutrients carried into the Bay by high flows this summer could spell trouble for underwater grass beds, one of the Chesapeake’s most important habitats and a closely watched indicator of Bay health. Sediment blocks sunlight needed by the grasses growing on the bottom of the Bay and its tributaries, and high river flows can physically rip plants out of the soft bottom. Nutrients spur the growth of algae, which rob the water of oxygen when they die.

Grasses covered more than 100,000 acres of the bottom of the Bay and its tributaries in 2017, the highest level in decades.

Not a complete washout

Although the Bay’s grass beds will likely take a hit as a result of the summer storms, it “isn’t going to be a complete washout,” said Bob Orth, a researcher with the Virginia Institute of Marine Science who oversees the annual Baywide aerial survey of underwater grasses.

“We’ve been getting imagery after that big flow in July, and I’ve been shocked at what we’ve seen in terms of presence of grass that’s hanging in there,” he said.

Grass beds appear to be holding their own in Virginia’s Rappahannock River and have actually expanded in the upper Chester River in Maryland, he said. They have expanded as well in the upper Patuxent River, Orth added, but a large bed off Solomons Island in the lower part of the river has disappeared.

In the James in Virginia and the Severn in Maryland, beds that existed last year appear to have persisted, though their size might be reduced, Orth said.

But the rain, clouds and turbid water have hampered the annual aerial survey, putting it behind schedule. Areas with large beds, such as the Susquehanna Flats in the Upper Bay, have not yet been surveyed.

“The areas that we haven’t flown are unfortunately important areas,” Orth said.

The full impact, Orth cautioned, may not be known until next year. Some grasses need to build up energy during the sunny summer weather to overwinter and come back the next year. If they tap into their reserves because turbid water was blocking sunlight, it might impact their ability to survive and regenerate.

“The story is really going to unfold next year to see whether the plants were able to store reserves so that next spring they can come out of hibernation and do well,” he said.