Cassie Gurbisz, a St. Mary’s College coastal ecosystem ecologist, prepares to take a sample of underwater grasses near the Susquehanna Flats during a research cruise in mid-August. Photo by Jeremy Cox, Bay Journal

Up to her chest in muddy water, Cassie Gurbisz had a clear realization.

“When I just went down, it was pitch-black at the bottom,” said Gurbisz, a coastal ecologist with Maryland’s St. Mary’s College, as she prepared for another dive into the Upper Bay. “I’ve never been in water this murky before.”

The chocolate-colored water was caused by an unusual summertime deluge that dumped a foot or more of rain in parts of Maryland and Pennsylvania over a five-day span beginning July 21. Just as water levels began falling, a smaller sequel roared into northern Pennsylvania and southern New York, adding another 2–6 inches of rainfall.

The health of the Chesapeake has shown signs of improvement in recent years, with underwater grass beds reaching levels not seen in decades, and dissolved oxygen levels ticking upward in deepwater areas. The persistent storms could be a setback, at least in the short term, for recovery efforts, though it will take weeks, if not months, of monitoring for scientists to fully assess the potential damage — or even know the amount of water-fouling nutrients and sediment that were flushed into the Bay.

The pollution could spur late-summer algae blooms, bury bottom habitats in silt and contribute to oxygen-starved “dead zones,” advocates fear. It is one of the biggest tests the ecosystem has faced since the state-federal Bay Program partnership kicked off a new 15-year restoration effort in 2010.

“We hope the Bay has recovered over the past 10 years, so that it can recover from these types of [storm] events and not be set back this time,” said Doug Myers, a scientist with the Chesapeake Bay Foundation, a nonprofit environmental group.

The July rains supercharged flows on the Susquehanna River — which provides about half of the freshwater entering the Chesapeake — to a peak of 375,000 cubic feet per second at the Conowingo Dam on July 26, according to the U.S. Geological Survey. 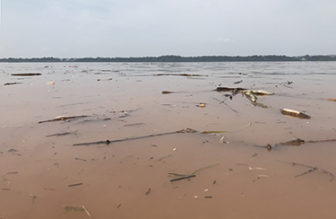 Near the Susquehanna Flats in mid-August, the Chesapeake’s waters turned the color of chocolate milk after a second wave of summer storms sent stormwater and woody debris gushing down the Susquehanna River and into the Bay. Photo by Jeremy Cox, Bay Journal.

The August storm boosted flows to 211,000 cubic feet per second and prompted another round of floodgate opening.

That peak came the day that Gurbisz and her fellow scientists were taking sediment and grass samples within view of the Thomas J. Hatem Memorial Bridge, which spans the Susquehanna in Maryland just upstream from its confluence with the Bay. The water was tinged the color of chocolate milk and either dotted or smeared, depending on the spot, with tree trunks and branches.

“It’s spectacular with all this debris, but what actually affects the Bay is the suspended sediment,” said Cindy Palinkas, a University of Maryland Center for Environmental Science researcher also working on the study.

Since the spring, the researchers have been examining small patches of underwater grass near the mouth of the Susquehanna. The team recently received additional funding from Maryland Sea Grant to study how the grass responded to the rainfall in one of the largest patches of them all: the Susquehanna Flats.

They plan to compare their findings with measurements they took of the Flats during a separate study in 2014–15, which were comparatively dry years.

Grass beds in the Flats trap some of the sediment and nutrients as they flow out of the Susquehanna, Palinkas said, helping to improve water quality in the area. Those beds were wiped out after Tropical Storm Agnes — the largest storm on record — hit in 1972. They have since bounced back to cover more than 9,000 acres of Bay bottom, making the Flats one of the largest underwater beds in the Bay.

The grasses could use some dry weather this fall to recover, Palinkas said. The murky water can block the sunlight, causing the plants to die off. The sediment particles can also settle on the leaves themselves, spreading more shade. 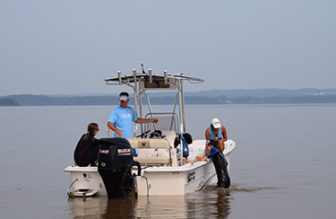 Miles Bolton, a graduate student with the University of Maryland Center for Environmental Science, eases off into the water of the Susquehanna Flats in mid-August. The team of researchers with the University of Maryland and St. Mary’s College are examining the Upper Bay’s underwater grass beds to see how much sediment and nutrients they trapped after July’s heavy rains. Photo by Jeremy Cox, Bay Journal.

The grass beds appear to be able to weather a heavy pulse of water now and then, but not repeatedly, Palinkas said.

“You can withstand the occasional cold,” she said. “You can’t withstand 20 colds in a row.”

The size of the storm was not particularly unusual. River flows of 375,000 cubic feet per second at Conowingo would be expected about every four years on average, said Joel Bloomquist, a USGS hydrologist. This was the first time flow had approached the level since 2011, when a deluge from Tropical Storm Lee led to slugs that were twice a high.

But the timing of the rain events — during typically dry midsummer months — is unusual.

Very high stream flows are usually associated with spring rains and snowmelt as well as tropical storms and hurricanes that strike in late summer or fall. (But Agnes, the most severe storm on record, hit in June 1972.)

High flows in the summer can be more damaging than at other times because it’s the peak of biological activity for many important Bay species, from underwater grass beds to juvenile fish and crabs.

The July rainfall was especially heavy in a band extending north and south along Maryland’s Western Shore into southern Pennsylvania. Storms dumped at least 10 inches of rain in the area, with one spot in Baltimore County receiving as much as 15 inches, according to the National Weather Service. BWI Marshall Airport got inundated with nearly 11.2 inches of rain. Norfolk, at the base of the Bay, received slightly more than 4 inches. Dulles Airport and the District of Columbia’s Northern Virginia suburbs got hit with 5 inches of rain on July 21 alone, fueling a total of 7.7 inches over those five soggy days.

One bright spot with the influx of water is that it flushed out to sea much of the water that was in the Bay, including the deeper portions that had grown inhospitable to life, Myers said. 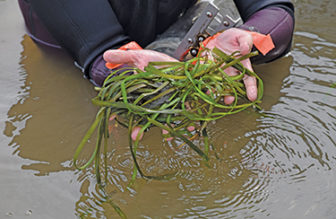 This clump of wild celery was gathered from a small patch of underwater grasses near the Susquehanna Flats. Photo by Jeremy Cox, Bay Journal.

In June, scientists predicted that a larger than average “dead zone” would spread across the bottom of the Bay this summer. They based their forecast on heavy spring rains, which sent nutrients streaming down the Susquehanna and Potomac rivers. The nutrients feed algae blooms, which, in the process of sinking and dying, deplete the water of oxygen.

By late July, though, Maryland’s Department of Natural Resources was recording the best oxygen conditions it had ever found for that time of year in the Bay. The recent rain and wind had churned up the water so much that the only oxygen-starved areas were restricted to depths of 65 feet or deeper.

But all of the freshwater pushed into the Bay could be bad news for some species, such as oysters, which like higher salinities.

In Virginia, oysters beds were already dying in the James River and other tributaries, said Ryan Carnegie, a researcher with the Virginia Institute of Marine Science.

Salinity readings at the mouth of the York River plummeted to 10 parts per thousand, about half of the normal value, according to VIMS. Researchers found that the unusually fresh water was all but devoid of potentially harmful algal species in the wake of the July rains. Young striped bass were venturing farther downstream than normal, taking advantage of the saltwater’s retreat. 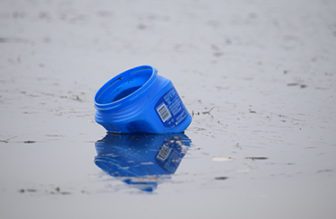 A plastic Maxwell House container floats in the Upper Bay in mid-August after several inches of rain in late July across the watershed washed tons of debris into the Chesapeake. Photo by Jeremy Cox, Bay Journal.

It’s unclear how the Bay’s plant and animal life will respond over the long term to the lashing from sediment and nutrients, Carnegie said.

“Estuaries are inherently variable environments,” he said, “but extreme events can be beyond what many inhabitants can manage. The 1972 Agnes event is a classic illustration. We will just have to wait and see how detrimental this year’s event was to key resource species.”

Although rivers throughout the region were choked with debris, some pointed a finger at the Conowingo Dam, which is up for relicensing. They want Exelon to do more to control nutrients, sediment and debris being pushed downstream of the dam. Maryland, as part of the condition for the new license, is pressing to spend up to $172 million a year to control nutrient and sediment pollution and to more frequently clean debris that builds up behind the 94-foot-high structure.

“None of that pollution would be building up and causing a danger or hazard but for the dam,” said Betsy Nicholas, executive director of Waterkeepers Chesapeake, which has pressed the state to go even further. She added that climate change is expected to make severe storms more frequent.

Exelon has said it is not responsible for pollution originating upstream that flows past the dam, and that the state’s proposal would cost more than it makes from the hydroelectric facility. It has challenged Maryland’s requirements in court.

Back on the Upper Bay, the UMCES boat carrying Palinkas kept making unscheduled stops because the motor was getting choked with grass growing in the Flats. The pattern repeated itself more than a half-dozen times: remove, go, sputter.

But she was optimistic the Bay would bounce back. “It looks really dramatic now with all the sediment and the water. But you give it time, I think it will recover.”

Karl Blankenship contributed to this report.

Maryland’s “civic health” is good but not great