New steel pipes, equipment, and fencing will be redirecting traffic on Bladen Street for at least a year, the estimated time to complete this part of the project, on Tuesday, Sept. 4, 2018. Photo by Howard R. Fletcher, Capital News Service.

Statues of Thurgood Marshall and three companions are being sent away from Lawyers Mall in Annapolis. And it’s for their own good.

The Maryland Board of Public Works voted unanimously on Wednesday to approve emergency funding for an underground infrastructure replacement project.

This will mean major changes to Lawyers Mall over the next one to two years, according to the Department of General Services.

“Making the repairs under Lawyers Mall will require the removal of the four Marshall memorial statues, the colonnade and entablature (the columns and pediment), and any other related artwork or stonework on Lawyers Mall,” said Elaine Rice Bachmann, secretary of the State House Trust, an organization created in 1969 to oversee the area inside State Circle in Annapolis.

Dismantling Lawyers Mall and securing the statues is scheduled to commence on Monday, Bachmann said.

The statues are depictions of Supreme Court Justice Thurgood Marshall, two children representing the Brown v. Board of Education decision that declared segregated schools to be unconstitutional, and Donald Gaines Murray, who was successfully defended by Thurgood Marshall in his case to integrate the University of Maryland law school in 1935, Bachmann explained. 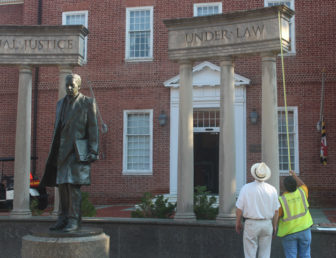 Sculptor to be involved in move

The sculptor of the Thurgood Marshall Memorial, Toby Mendez, will be involved in the entire process of disassembling and reassembling the mall, Bachmann said.

“All of the artwork will be secured and stored at the State Archives storage facility in Woodlawn, Maryland,” Bachmann said.

The State House Trust is considering displaying interpretive panels to temporarily replace the Marshall memorial during the construction period.

“The Trust’s goal is to make sure that visitors are aware of the Thurgood Marshall Memorial, why it has been temporarily removed, and the estimated date of its return,” Bachmann said.

The State House Trust hopes to include historical information about Marshall on the panels, as well as facts on the design of the memorial, Bachmann added.

Protests in alternate locations through 2020

The Maryland Department of General Services is responsible for maintaining alternate locations for planned demonstrations and rallies once Lawyers Mall is fully closed in January 2019, and the mall is expected to reopen in late 2020, according to an emergency alert on the department’s website.

“The construction of Lawyers Mall will continue during the legislative session,” said Nick Cavey, director of communications for the Department of General Services. “During the construction period, DGS will provide alternate locations for demonstrators.

The exact sites of the alternate locations are unknown at this time as plans related to the project are ongoing, Cavey added.

Utility contractors have started the process of breaking through the stone and asphalt of Bladen Street to begin replacing the underground infrastructure.

“We’ve been hammering and digging out here for almost two weeks now,” Mark Fanelli, a superintendent on the job, told the University of Maryland’s Capital News Service on Tuesday. “It’s been blazing hot almost every day, but we are just kinda used to it.”

“This first phase of the project is estimated to last at least a year and includes the utilities from the front of the House Office building across College Avenue,” said Cavey. “The current project replaces the oldest remaining section of a steam distribution system installed in the 1990s with some portions replaced in 2005 and 2011.” 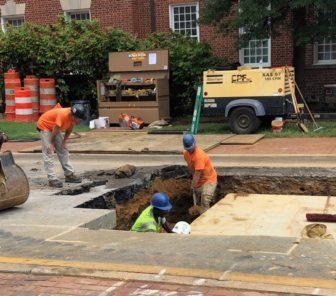 Utility construction workers from CPF LLC break through the concrete on Bladen Street next to the State House building to begin phase one of a steam line repair project on the Annapolis government campus on Tuesday, Sept. 4, 2018. Photo by Howard R. Fletcher, Capital News Service.

During construction next to the House Office building, traffic is being rerouted around State Circle or onto College Avenue. Moving forward, areas of Lawyers Mall will also be closed, according to the General Services department.

“There’s no question that the deferred maintenance over the last 20 or 30 years is now coming home to roost,” said a frustrated Gov. Larry Hogan at an Aug. 22 Board of Public Works meeting. “And, we’re doing everything we can to start fixing these problems that should have been fixed 10 or 20 years ago, but it’s very expensive and we can’t do it overnight.”

Phases I and II of the project will cost the state $3,328,850, according to the contract approved Wednesday. Both stages of the project will involve the State House building and Lawyers Mall areas of the Annapolis campus. CPF LLC of Prince Frederick, Maryland, won the bid for both phases.

State officials have projected the cost of the entire project to have a much steeper price tag.

“The original estimate of $7.5 million only addressed the steam line infrastructure; the estimated budget of approximately $11 million… (includes the) design and construction of Lawyers’ Mall.”

The project has been in state construction plans since 2013, and it is in the 2019 fiscal year capital budget as a standalone project under the Board of Public Works, Cavey said.

The steam piping and chilled water systems around the Capitol developed leaks in multiple areas in recent years, according to the Department of General Services.

The leaks caused the central plant, the power hub of the Annapolis campus, to add thousands of gallons of water to the systems daily to keep them operational, according to Board of Public Works documents.

These leaks are forcing the cooling and heating systems to function well beyond normal operating capacities, Cavey said.

The State House Trust is considering rebuilding Lawyers Mall — a popular gathering place for demonstrations and public assemblies — with improvements.

“It will give us the opportunity to address some areas we couldn’t without taking the whole mall apart such as: new lighting, making it more accessible for the handicapped, and updated security considerations,” Bachmann said.

Other funding and contracts approved at Wednesday’s Board of Public Works meeting included:

–An emergency $176,400 construction contact to Retro-Environmental to raze three buildings damaged by fire at the O’Farrell Youth Center in Marriottsville, Maryland.

–Four emergency construction contracts totalling $1,387,104 to remove debris, for building repair, and to replace destroyed equipment that resulted from water infiltration during flooding at Spring Grove Hospital Center in Catonsville, Maryland, in May.

–Correct Rx Pharmacy Services Inc. was granted a $52,999,231 extension to its current contract, until December 2019, for an inmate pharmacy program.