“Tacky” was how Republican elected officials referred to Democratic Sen. Ron Young’s role in a demonstration Monday outside a noontime fundraiser for his Republican opponent, Craig Giangrande featuring Gov. Larry Hogan as the main attraction.

Hogan made light of Young’s demonstration when he spoke to the well-heeled crowd of over 100 inside Brewer’s Alley on Market Street in Frederick.

“You know I was really shocked when I saw this homeless guy on the street when I pulled up standing next to a couple of dumpsters,” Hogan said. “He had two cardboard handmade signs in his hand. And I’m not sure what he was doing out there, but he seemed pretty desperate and pretty scared.”

Young was actually standing next to parked cars, not dumpsters, and state troopers eventually took Hogan into the restaurant from the back way to avoid confrontation with 20 peaceful demonstrators on the sidewalk and roadway holding signs for a number of Democratic candidates, including Hogan’s opponent, Ben Jealous.

Democrats wave signs outside fundraiser for Craig Giangrande. Signs for Ben Jealous and Ron Young arrived after this photo was taken. MarylandReporter.com photo

Young, 77, the mayor of Frederick from 1974 to 1990, was indeed holding handmade cardboard signs that said: “Straight for 8– An All Democratic Frederick Delegation” and “Drive for 5 — Democrats in the Frederick County Delegation.”

Young was mocking the GOP’s “Drive for 5,” the Republican campaign to pick up five seats in the Maryland Senate that has put a target on Young’s back in Legislative District 3. Five more Republicans would mean they could sustain Hogan’s vetoes and filibuster successfully against Democratic bills they oppose.

“If you didn’t know it was Ron Young you might have thought it was a homeless guy out there,” Sen. Mike Hough, R, who represents the northern half of Frederick County, told the crowd inside. “It’s nice to see him here in Frederick County. I think he’s confused because when he’s down in Annapolis he thinks he’s from Montgomery County,” voting with the left wing of his party.

Based on the rating of Maryland Business for Responsive Government, Hough said, “the only person that has a voting record as poor as his is Paul Pinsky,” the strongly progressive Prince George’s County senator.

“We cannot get the five seats we need without Craig winning this one — you really can’t,” Hough said. 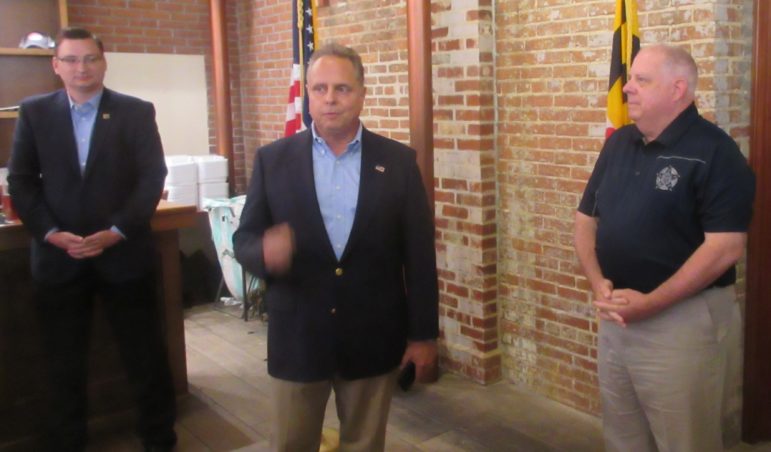 In an interview on the sidewalk, Young took pride in being “the main target” of the Drive for 5, saying the Republicans would like to take even more seats, as the governor confirmed later. The senator said it was his stands on social issues that have stirred Republican ire.

Hogan “gives us this image of being so bipartisan,” but he isn’t, Young said. He punished Republican freshman Sen. Steve Waugh, R-St. Mary’s and endorsed his GOP primary opponent, because he “worked with Democrats” on some issues, Young said.

“I would love to have a true bipartisan governor,” he said.

“We’ve tried to get a meeting with him about the hotel” in downtown Frederick, but Hogan has refused, said Young. The state-financing for the conference-center hotel has been rejected by state agencies. Young has spent most of his political career focused on revitalizing the city of Frederick, with much success.

Young complained that Hogan does not let cabinet secretaries testify on bills in the legislature — a common complaint among Democratic lawmakers.

Asked if he supported Hogan’s opponent, Young said, “I support Ben.” The GOP is running ads attacking Jealous as an extreme left candidate who would raise taxes and double the state budget.

Young has been endorsed by the state teacher’s union (MSEA), AFSCME, LiUNA, the AFL-CIO, the Maryland League of Conservation Voters, the Sierra Club, and NARAL (National Abortion Rights Action League), Moms Demand Action on guns, and the Maryland Association of Realtors. 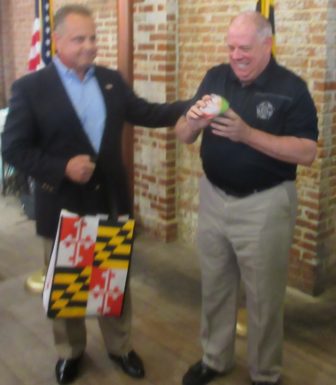 Craig Giangrande gave Gov. Hogan a bag of hamburgers at his fundraiser. “I don’t want anybody to think that I’m just here for the hamburgers,” Hogan joked. “I am a big consumer of your product.” MarylandReporter.com photo

Giangrande, 53, owns several Burger King restaurants and Young has criticized him for not paying the $15 minimum wage that Young supports and for hiring undocumented immigrants, a charge Giangrande denies.  “I’m glad he hires them,” Young said, but he should pay them more.

“There’s no evidence raising the minimum wage costs jobs,” Young said. “Wherever the $15 minimum has been implemented, it works.”

“As a guy who sells hamburgers for a living I just really wanted to get involved,” Giangrande said. Hogan appreciated the sentiment as someone who ran a real estate development company and had never held elected office before. 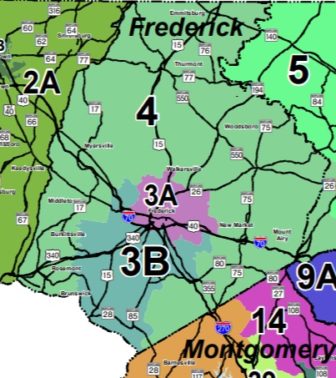 Legislative Districts 3 and 4 in Frederick County

“I ran because I was frustrated with what was going on in our state. I think that’s the same reason Craig is running. He could be down in Florida retired or selling more hamburgers but he cares enough about the state to run.”

Hough predicted that Democratic Senate President Mike Miller would be plowing $300,000 into the race to protect the seat for Young, and he urged donors to continue to write checks for Giangrande who has already put $60,000 of his own money into the race.

“Everybody talks about the drive for five, but I’m not even happy with that,” said Hogan. “What about six? I think seven would be heaven, eight would be great, nine is fine.”

As he does consistently, Hogan cautioned against complacency. “I may be 20 points ahead in the polls, but I’m running as if I’m 20 points behind.”