TRUMP SCOTUS PICK A MARYLANDER: President Donald Trump’s next Supreme Court pick — announced Monday night at a White House address — is an appellate judge from Maryland whose work on the Starr Report drew the ire of Democrats when President George W. Bush nominated him for the U.S. Court of Appeals. Brett M. Kavanaugh, who grew up in Bethesda, serves on the federal appeals court in D.C., Christina Tkacik of the Sun writes.

BIZ, DEMS PONDER NOT BACKING ELRICH: Rachel Chason and Robert McCartney of the Post report that Democrat Marc Elrich barely had time to celebrate his razor-thin victory in the primary contest to lead Maryland’s largest county before top business leaders threw their support behind a potential independent challenger, saying the left-leaning lawmaker would be hostile to economic growth. But two Democratic members of the Montgomery County Council, including one who lost to Elrich in the primary, said they would back him in the general election. They warned that a split among Democrats could open the way to a victory by Republican nominee Robin Ficker in November.

BROCHIN TO FILE FOR RECOUNT IN BA CO: State Sen. Jim Brochin said he’ll file a request for a recount in the Democratic primary for Baltimore County executive — which he lost by just nine votes — as early as this afternoon, reports Pamela Wood in the Sun. This morning, the county Board of Elections is scheduled to certify the election results, which have former Del. Johnny Olszewski Jr. as the victor over Brochin, County Councilwoman Vicki Almond and Kevin Marron.

RECOUNT SOUGHT IN HO CO COUNCIL RACE: Howard County Councilman Jon Weinstein has asked for a recount in the District 1 Democratic primary after losing to Liz Walsh by two votes last week. Kate Magill of the Howard County Times reports that Weinstein announced his decision for a full manual recount of absentee, provisional and election day ballots yesterday. He said he heard from nearly 200 constituents and community leaders over the weekend urging him to request the recount and wanted to ensure every vote was tallied correctly in a race he called a “virtual tie.” 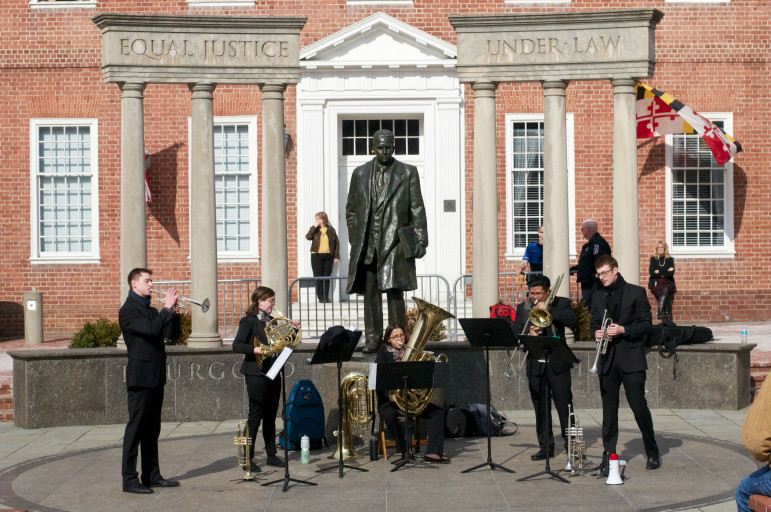 MARSHALL STATUE TO BE MOVED FOR MALL REPAIRS: A failing heating system in front of the State House will require uprooting the Thurgood Marshall statue, along with its stone fixtures and surrounding bronze figures. State officials say they might have to close a large area of Lawyers Mall for a year or more during the $11 million project. They have determined there isn’t room to keep the Marshall memorial intact while replacing pipes running below during construction, Elisha Sauers reports in the Annapolis Capital.

WENDY WINTERS, HERO: Danielle Ohl of the Annapolis Capital reports that journalist Wendi Winters saved the life of one Capital Gazette staffer during the June 28 assault on the newspaper by a single gunman. She likely saved others’ lives as well.

HOUSE MEMBERS FIGHT FOR OPIOID BILLS: U.S. House Democrats and Republicans, some locked in tight re-election contests, have been clamoring to get their bills to fight the opioid crisis voted on. So, does that mean it’s all just political theater? Not according to Maryland’s lone Republican congressman, Andy Harris. “There’s overwhelming bipartisan support to solve this opioid issue,” he told WYPR’s Matt Laslo. Some Democrats and health experts say the GOP lead effort fell short because it didn’t allocate any new funds for the crisis, but Harris – a doctor by training – disagrees.

TRIAL CONTINUANCE SOUGHT: A Washington County commissioner accused of sexually harassing a county employee has filed to hire a new attorney and postpone the upcoming trial in a civil lawsuit. Dan Dearth of the Hagerstown Herald Mail writes that the attorneys for Washington County Commissioner LeRoy Myers filed the motion July 3 in Washington County Circuit Court. The motion requests that Myers change his legal counsel from Venable LLP of Towson to D. Bruce Poole of Hagerstown if a 90-day continuance is granted.