Sgt. Wayne Jenkins later admitted to arranging for 30 grams of heroin to be planted in Omar Burley’s car after the deadly collision. By the time of Jenkins’ confession, Burley had spent more than seven years in prison. Photo from federal court records.

This is Part 3 of an article by the Capital News Service about how plea deals punish the innocent in a Baltimore police scandal. The investigation by Capital News Service and Injustice Watch was completed as part of a nationwide examination of plea bargaining. Parts 1 and 2 were previously published.

Evidence of corruption by Baltimore City Sgt. Wayne Jenkins and others lay just below the surface in Baltimore’s criminal justice system for years. Defendants’ allegations rarely made it to open court, leaving the isolated few that did to founder.

His name appears as an arresting officer on 82 of the voided Baltimore cases, the CNS analysis found. He became the sixth member of the Gun Trace Task Force to plead guilty over the past year and faces a sentence of 20 to 30 years in prison.

Internal affairs complaints against police officers piled up in secret. Under Maryland law, they are not public records. Defense attorneys had to get a court order to access them.

“Limited access to officers’ internal affairs files inhibits defense attorneys from advising their clients on whether or not they should take a plea deal or go to trial,” said Debbie Katz Levi, director of special litigation in the Maryland Office of the Public Defender.

“If I had a Jenkins case and I knew that he was alleged to have robbed six people while working as an officer…I would have never advised my client to accept a plea,” she said. 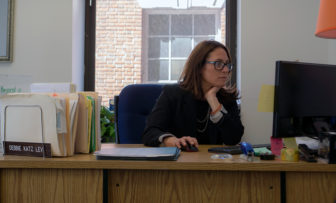 Debbie Katz Levi, director of special litigation in the Maryland Office of the Public Defender, at her office in Baltimore. Levi said limited access to police internal affairs files made it difficult for defense attorneys to advise their clients on plea deals. Capital News Service Photo by Tom Hart.

Meanwhile, the state’s attorney’s office had full access to the complaints and an obligation to check out a police officer’s records before going forward with a case, she said, especially given the department’s recent track record.

Schatzow, the chief deputy state’s attorney, said his office was legally obligated to provide defense attorneys with internal affairs records only if they had a bearing on the defendant’s guilt or innocence, sentencing or impeachment of witnesses. However, he said his office will provide full access to the files going forward.

“It’s not required by law. It involves an awful lot of resources. We didn’t do it because we weren’t required to do it,” he said. “What’s changed is Freddie Gray died while in police custody…A federal judge has issued a consent decree. Members of the Gun Trace Task Force have been indicted.”

Jenkins’ lawyer, Steve Levin, declined to comment but referred reporters to a sentencing memorandum in which he says his client “understands the gravity of this situation and his culpability.”

Omar Burley said he learned about Jenkins’ arrest in March 2017 in the rec hall of an Oklahoma prison, where he stayed for a few days in federal transit. News about the Gun Trace Task Force flashed across the television screen.

Burley reached a plea deal after speeding away from gunmen who turned out to be police, and crashed his car into an elderly couple.

The arrest report said Burley, then 39, had been parked in a “meet location for distribution of drugs” and fled when they displayed their badges. They wrote that they recovered 32 grams of heroin from his car after the crash. He was charged with manslaughter and possession with intent to distribute heroin, a felony. But Burley’s conviction was later voided as a result of Jenkins’ conviction.

Brent Matthews, who was in the car with him when he was arrested and had already served his time, shot Burley an email about 10 minutes later: “They finally got them bastards, man.”

Encouraged by his cellmate, Burley wrote a letter to U.S. District Court Judge Catherine Blake. She had dismissed a gun charge against him in 2009 after the U.S attorney’s office determined that the gun wasn’t his. As with the later drug charge, Baltimore police had arrested him and the case moved to federal court.

“Could you imagine how hard it is to be here for a crime I didn’t commit and struggling to find clarity and justice on my own?” he wrote the judge from prison.

On a recent afternoon, he chased two of his granddaughters around a playground at Druid Hill Park in Baltimore. When he sat down on a bench, Arian, now 3, climbed onto his lap and Aubrey, 7, leaned against him.

Burley, now 47, said he missed so much in prison — his older daughter becoming a mother, his younger daughter’s junior prom, his granddaughters growing up.

“When you become a parent, you want to be a part of those things,” he said.

He would talk to the 7-year-old occasionally by phone “and I couldn’t talk to her long because she had so many questions like, ‘Granddaddy, why do I never see you? Or where you at?’ They told her I was away in school.” 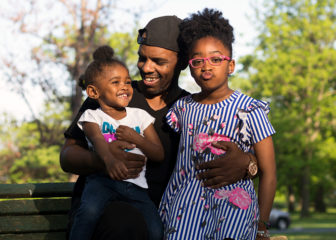 Omar Burley and granddaughters (left) Arian, now 3, and (right) Aubrey, 7, at Druid Hill Park in Baltimore. Burley was in prison for a crime he did not commit when they were born. Capital News Service Photo by Alex Mann.

He is still paying a price. While he was in prison, relatives of Elbert Davis, the man killed in the collision, sued Burley and won a $1 million judgment against him. His exoneration did not wipe out that debt, he said. Members of the Davis family now are suing the city’s police department and mayor.

He doesn’t have a job yet and worries that his conviction and the publicity surrounding it will scare off employers when they look him up on the internet.

“Why me? You know what I mean? For what reason?” he said. “Why would they [the police] want to destroy my life for no apparent reason at all? I never, they don’t know me, I don’t know them.”

He wonders if he made a mistake by pleading guilty.

“Well, somehow I wish that maybe I would’ve just stuck with my first intuition and went on and not pleaded guilty. Took it to trial. But I was afraid,” he said. “They put that time in front of you and you know the judicial system. And you’ve been through it before and how easy it is for you to get time, or get found guilty…So you want as less as time as possible. You know what I mean? And that’s what it was.”

Burley and Matthews were exonerated in a hearing last December before U.S. District Judge Richard D. Bennett, who had accepted their pleas in 2011. After voiding their convictions, he stepped down from his bench to shake the men’s hands and offer them a personal apology — the third time in a 14-year-long career for him to do so, he said.

“Somebody in a position of authority. . . has to apologize on the behalf of the government,” Bennett told the men. “I’m very sorry.”

Board approves sale of Rosewood Center to Stevenson University