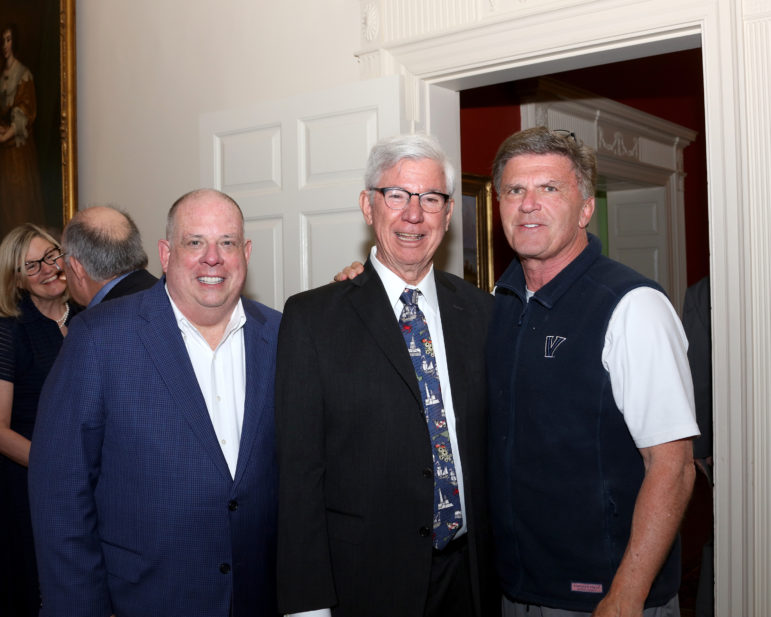 ODDS AGAINST QUICK MOVES ON SPORTS BETTING  Don’t go placing any bets that Maryland lawmakers will act soon to legalize sports wagering, writes Scott Dance in the Sun. A day after the U.S. Supreme Court cleared the way for states to offer sports betting, Maryland General Assembly leaders said Tuesday they are willing to consider convening a special session on allowing the wagering at state casinos. But they deferred to Gov. Larry Hogan, who a spokeswoman said “has no plans” to call lawmakers to Annapolis.

HOGAN SIGNS BAN ON CONVERSION THERAPY  Gov. Larry Hogan signed a bill Tuesday making Maryland the 11th state to ban the practice of “conversion therapy” for LGBT youth writes Scott Dance in the Sun. He then turned and gave one of the ceremonial bill-signing pens to Del. Meagan Simonaire an Anne Arundel County Republican, came out as bisexual during a speech on the House floor last month as she urged her colleagues to vote for the legislation.

HOGAN INKS POLICE PROBE BILL  As Baltimore Police Commissioner Darryl DeSousa resigned Tuesday morning, Gov. Larry Hogan signed a bill that establishes a commission with subpoena power to probe potential misconduct in the Baltimore Police Department that may have been connected to convictions of eight members of the Gun Trace Task Force on federal corruption charges writes Scott Dance in the Sun.

NO HEARINGS ON REPLACING KAMENETZ: The chairman of the Baltimore County Council said Tuesday he does not plan to seek candidates publicly or hold open hearings on who should replace County Executive Kevin Kamenetz, who died suddenly last week. Julian Jones said council members were elected to make these type of decisions — and did not require public input, according to the story by Sun reporters Pamela Wood and Alison Knezevich. Two Republican council members disagreed.

DEMS TRY TO BREAK FREE FROM PACK  Six weeks before the June 26 primary, the major Democratic candidates — a cast including one county executive, one state lawmaker and four political novices — are struggling to capture voters’ attention and emerge as the clear alternative to Hogan, writes Paul Schwartzman in the Post. The muddle also has tested voters’ ability to accomplish that most basic of tasks — matching the candidates’ names with their faces.

FROSH SEEKS HELP WITH OPIOID PROBE  The Maryland Office of the Attorney General is seeking help from outside law firms to help in its ongoing investigations into opioid manufacturers and distributors writes Heather Cobun in the Daily Record. The request for proposals for special litigation counsel was made Friday by the Consumer Protection Division, which has been investigating potential claims against drug companies since 2016. Proposals are due June 18 and Attorney General Brian E. Frosh said he expects a robust response.

ARUNA MILLER ADS HIT AIRWAVES  Two television ads released today highlight some of state Del. Aruna Miller’s most significant legislative accomplishments in the Maryland General Assembly writes Ryan Miner in a blog post today. Miller is hoping to convince Democrats – and eventually some Republicans – in Maryland’s 6th Congressional District to send her to Washington to succeed U.S. Rep. John Delaney in a district that stretches from Deep Creek Lake to the edges of Potomac.