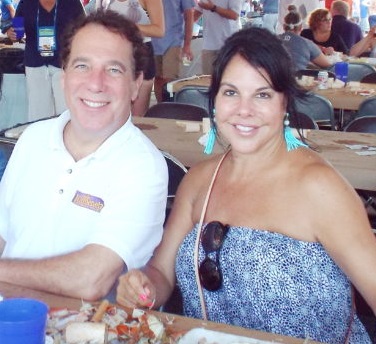 Editor’s note: The news of the day as we assemble State Roundup is sometimes surprising, often interesting, but seldom as shocking as it was this morning when we woke up to find that Baltimore County Executive Kevin Kamenetz had died early Thursday. Roundup editor Cynthia Prairie and I had known Kevin since he got elected to the county council in 1994 where he served four terms. Our offices at Patuxent Publishing were right across the street from the old County Courthouse where the council meets. My relations with Kevin were both friendly and combative; it was just two weeks ago he tweaked me, in private, for dozing off at a candidates forum. Our condolences to his wife Jill and the family and his longtime staff, such as our old friend Don Mohler, his chief of staff. Len Lazarick, Editor and Publisher

KEVIN KAMENETZ DIES: Baltimore County Executive Kevin Kamenetz — a Democratic candidate for governor and a fixture in state and local politics for nearly a quarter century — died Thursday morning of cardiac arrest, staff at the Sun is reporting. Baltimore County police issued a statement saying that Kamenetz, 60, had been transported by ambulance early this morning to University of Maryland St. Joseph Medical Center where he was declared dead of a cardiac arrest.

SEXTORTION TO BECOME A CRIME: “Sextortion” will become a crime in Maryland as of Oct. 1, Steve Lash reports in the Daily Record. The state has made it misdemeanor — punishable by up to 10 years in prison — to compel someone to perform a sexual act by threatening to accuse them of committing a crime or other disreputable act, to cause them economic damage, or to damage their property. Maryland’s current rape law prohibits coercing sex by a threat of force.

NO CRABS FOR YOU: Federal regulators have forbidden many Baltimore-area carryout shops from accepting food stamps for steamed crabs, stirring debate over whether such purchases are an appropriate use of government benefits, and if the restrictions could be another blow to Maryland’s beleaguered seafood industry, reports Scott Dance for the Sun.

JUVIE CRAB POPULATION UP: The Chesapeake Bay crab population is down by 18% in 2018 compared to last season after cold weather killed off more than a third of adult crabs. But the number of juvenile crabs swimming into the bay is up by a third as crabbing season begins, reports Scott Dance for the Sun.

HELP FOR ADULT CHILDREN WITH DISABILITIES: Meghan Thompson of Maryland Matters writes about two parents of adult children with disabilities who scoured the state for agencies that could help as their children moved into needs to adults only to be discouraged, then encouraged to start their own programs and look to one another for help and inspiration.

GUBERNATORIAL CAMPAIGN COFFERS: In a long analysis for Capital News Service, Chris Cioffi, details who has been filling up the campaign coffers of the Democrats seeking to oust Gov. Larry Hogan. The article, appearing in MarylandReporter, states that some candidates are forming networks of small donors, while others are focusing more on checks from large contributors — including celebrities like Dave Chappelle, Domonique Foxworth and Ashley Judd. Capital News Service analyzed the candidates’ campaign finance report data for 2017.

VIGNARAJAH’s DOMICILE AGAIN QUESTIONED: Two documents that have not previously been made public could contradict a claim that Krish Vignarajah has made during her campaign for governor: that the D.C. co-op unit, which she bought with her mother in 2009, was only a place to lay her head after a day’s work, reports Steve Thompson for the Post. Maryland requires that its governor be a resident of the state for five years before the election, a requirement that Vignarajah says she meets because she considered Maryland her home even during her years in the District, when she worked for a law firm and the Obama administration.

‘TRUMP EFFECT’ A THREAT TO HOGAN? Former Gov. Bob Ehrlich said the biggest threat Gov. Larry Hogan faces in his bid for a second term is the “Trump Effect” — a higher-than-normal turnout among Democrats and independents fueled by intense anger at the current occupant of the White House. “Clearly, he’s a polarizing president,” Ehrlich said in a recent interview with Bruce DePuyt of Maryland Matters.

GUN PROPOSAL IN BA CO: A Baltimore County councilwoman has introduced legislation she says is intended to prevent teens from getting their hands on guns. Vicki Almond, a Reisterstown Democrat who is running for county executive, wants to prohibit people from having loaded firearms in a place where an unsupervised minor under age 18 could get access to them, Alison Knezevich reports in the Sun.

MOSBY FOES FACE OFF: The two candidates seeking to defeat Baltimore State’s Attorney Marilyn Mosby in next month’s primary election faced off against each other Wednesday night for the first time in the Democratic campaign. Ivan Bates and Thiru Vignarajah took seats on either side of an empty chair with Mosby’s name on it as they discussed their strategies at a forum sponsored by the nonprofit Downtown Baltimore Family Alliance at Peabody Heights Brewery, Doug Donovan writes for the Sun.

MARYLAND WRITER JIM DILTS, 81, DIES: James Dothard Dilts, who died yesterday at age 81 after a short illness, had many talents. A journalist, historian, book author, carpenter and sailor, he was also a jazz connoisseur, documentary filmmaker, friend of artists and a leader of Baltimore’s preservation movement. Mark Reutter of Baltimore Brew writes a personal tribute.