Democratic race for governor a snooze for some

Baltimore County Executive Kevin Kamenetz caught me snoozing at Thursday night’s forum with seven Democrats running for governor. Maybe their rhetoric had not been compelling enough to keep me awake, he suggested.

True enough, but I should not have sat in the front row seats the Greater Baltimore Committee had reserved for reporters. My natural tendency is to sit toward the back — both for easy retreat and to gauge the reaction of the crowd.

The Baltimore Sun’s Michael Dresser, whose feverish note taking is a constant wonder to behold, captured both the flavor and substance of the event in his story.

“The seven Democratic contenders for the party’s nomination for governor struggled mightily to distinguish themselves from the herd at a forum in Baltimore on Thursday night. None obviously succeeded.”

There’s not much you can do with seven articulate candidates being asked the same six questions with the same amount of time to respond over 90 minutes. It’s an invitation for dosing.

Basically a candidate has a total of about 12 minutes to introduce themselves. For those with little to no experience in state or local government — three of the seven candidates — there is a chance to talk about what they would do as governor as opposed to what they’ve done in government. (The two other little known Democratic candidates for governor were not invited by the sponsors, GBC and the Associated Black Charities. Gov. Larry Hogan, unopposed in the Republican primary, did not attend; he had no reason to be a punching bag for seven opponents.) 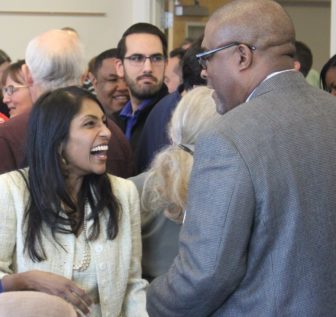 Krish Vignarajah with Jonathan Branch at the Columbia Democratic Club Saturday when she gained the club’s endorsement for governor. Facebook photo by Scott Ewart.

Krish Vignarajah, a lawyer with mostly federal experience who has only voted once in Maryland, according to the Seventh State blog, has both a compelling life story as the successful child of immigrants and a provocative style untethered to the realities of state government. She got off one of the best lines of the evening.

“No man can beat Larry Hogan. I’m no man,” said the only woman in the race and the only woman of color running for the top job. She clearly is the disruptive favorite of progressive Democrats, winning the endorsement of the Columbia Democratic Club on Saturday. She does well with any Democratic crowd when she has a chance to speak.

Can she win the support of the black women who will make up a major share of the Democratic primary electorate? Or will that go to former NAACP president Ben Jealous, who recently became the teachers union pet? What about Rushern Baker of Prince George’s County, executive of Maryland’s second largest county and a former legislator?

“We have the most experienced team in the field,” said Sen. Rich Madaleno of Montgomery County running with Luwanda Jenkins of Baltimore, a former state cabinet secretary.

Will Democrats be more attracted to candidates who know firsthand what they are talking about, or ones who will tell them what they want to hear?

The conventional wisdom — always a mainstay of MarylandReporter coverage — is that no team has broken out of the pack. Polls confirm this. And while political insiders are always kibitzing about who will win and who can win, the candidates are struggling to find that path to a narrow victory with 25 to 30% of the primary vote.

So they slog away at candidate forums — there were five in just the past week, and many before that and more to come.

The candidates with the most governing experience, like Baker, Kamenetz and Madaleno, also have the most baggage — a result of having made hard and sometimes unpopular decisions for years in the public eye. What do we know about the others’ character, decision making and governing style?

Is it fair to dismiss Jim Shea as the old white guy in the race, despite a hugely successful legal career and much public service (notably as chair of the Board of Regents of the University System of Maryland) besides?

All of the candidates have decided to play nice for the moment, as Dresser points out. The insulting attacks that proved so successful for Donald Trump in a crowded GOP field are unlikely to play well in a Democratic race. Plus Trump was already a household name, unlike the Democrats running for governor barely known outside their own field of influence.

Journalists love to cover drama, controversy and conflict, qualities missing in this campaign. At the moment, as it was Thursday, this contest is a snooze. 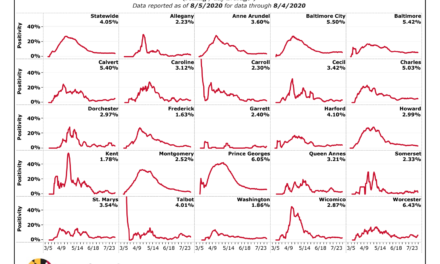 Imagining the future of journalism