WOMEN’s ADVOCATES HELPED KILL MARRIAGE AGE BILL: Most state lawmakers agree 15-year-olds are too young to get married, but a proposal to raise Maryland’s legal marriage age failed this week in the General Assembly because of pressure from an unexpected group — women’s rights advocates, reports Scott Dance in the Sun.

COLLEGE SEX ASSAULT POLICIES: Tim Curtis of the Daily Record writes that universities in Maryland must develop sexual assault disciplinary provisions that allow students access to an attorney, set parameters for sexual assault proceedings and restrict the use of mediation in resolving these disputes, under legislation passed by the Maryland General Assembly.

STATES COLLABORATE ON DAM POLLUTION: For years, the Conowingo Dam was considered a “time bomb” looming over Chesapeake Bay cleanup efforts, as it would begin spilling more water-fouling nutrients downstream when its 14-mile-long reservoir stopped trapping pollution. Recent analyses of monitoring data, though, have shown that the bomb actually went off years ago — but not with a resounding boom. A framework for cleanup calls for all states in the watershed to work on a new, collaborative watershed implementation plan aimed specifically at reducing enough nutrient pollution to offset the impact of more nutrients flowing past Conowingo, Bay Journal’s Karl Blankenship writes in MarylandReporter.

METRO BOARD REP SWITCH: A Maryland representative on the Metro board is stepping down after three years, and her replacement comes with financial management chops but little transportation experience. The change comes shortly after the Maryland General Assembly approved legislation that requires one of the state’s two voting members on the board be the Maryland secretary of transportation, or the secretary’s designee, and is part of an effort to increase the level of transportation-specific expertise on the panel, the Post’s Martine Powers reports.

SEN. NORMAN’s DEATH ‘DEVASTATING:’ Steve Lash of the Daily Record writes about Sen. Wayne Norman’s death during the session and the impact it had on the Senate Judicial Proceedings Committee on which he sat. Its chair, Sen. Bobby Zirkin, says, “It was devastating this session losing Wayne.”

POLITICAL LINGO: Kelsi Loos of the Frederick News Post offers up a General Assembly primer on phrases she learned during her first year covering the sausage making process in Annapolis.

HOGAN AVOIDS PARTISAN LABEL: Richard Vatz, a professor of political persuasion at Towson University, used the word “Republican” more than a dozen times Thursday when he introduced Gov. Larry Hogan to address his class. But, writes Ovetta Wiggins for the Post, Hogan — who is vying to become the second GOP governor in 60 years to win reelection in Maryland, a state where Democrats outnumber Republicans 2 to 1 — seemed eager to avoid the partisan label.

HOGAN TO BACK INCUMBENT REPUBLICAN’s CHALLENGER: Gov. Larry Hogan said he will endorse a primary opponent of a sitting Republican senator from St. Mary’s County, calling him “no better than any other Democrat we want to replace,” Bryan Sears of the Daily Record reports. The rift between the Republican governor campaigning for re-election and a member of his party comes at the same time he is seeking to expand the number of Republicans in the General Assembly to prevent some veto overrides. Hogan Thursday said he would endorse Jack Bailey over incumbent Sen. Stephen Waugh because of a disagreement on a veto vote, but observers say the feud runs deeper.

CUMMINGS RETURNS TO WASHINGTON: Noticeably thinner and riding a scooter, Rep. Elijah E. Cummings of Maryland was back in Washington this week after three months recovering from an infection in his left knee, writes Steve Thompson for the Post. “I am excited to be back at work, and I am fueled by the outpouring of support I have received from my constituents and colleagues,” he said through a spokeswoman Thursday.

RX POT DISPENSARIES OK’d TO OPEN: Maryland marijuana regulators approved this week the opening of seven new medical marijuana dispensaries, including two in Baltimore, writes the Sun’s Scott Dance. The Maryland Medical Cannabis Commission granted final approval for the seven dispensaries and for a new processor at its most recent meeting on Tuesday.

CARROLL STUDENTS BANNED FROM PROTEST: As students in Maryland and across the country are expected to participate in the next scheduled walkout against gun violence on April 20, Carroll County public school students will not be allowed to participate, Talia Richman of the Sun reports. Other area school systems, meanwhile, are still discussing how to handle the protest, which is being held on the anniversary of the deadly 1999 Columbine High School shooting in Colorado, in which two teens killed 13 classmates before taking their own lives.

MYERS’ ATTORNEY SEEKS SUIT DISMISSAL: A former Washington County employee’s allegations of sexual harassment against Commissioner LeRoy Myers still lack specificity and a civil suit filed against him should be dismissed, according to recent court filings by Myers’ attorneys. Former Assistant County Administrator Sarah Lankford Sprecher filed suit against Myers in December. She is seeking damages in excess of $225,000 for assault and battery, intentional infliction of emotional distress and defamation, Julie Greene reports for the Hagerstown Herald Mail. 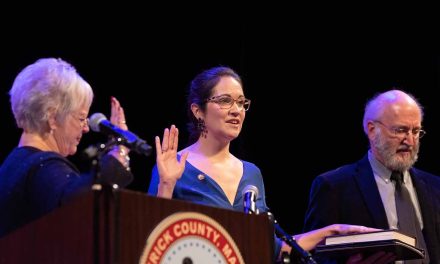