ASSEMBLY OVERRIDES VETO: In the final twist of a political power struggle in Annapolis, the Maryland General Assembly on Thursday overrode Gov. Larry Hogan’s veto of a bill that strips away his role in awarding hundreds of millions of dollars annually in school construction projects, Michael Dresser and Erin Cox of the Sun report.

MUSE DID NOT VOTE: Sen. Anthony Muse violated Senate rules Thursday when he decided to not cast a vote when his Democratic colleagues overrode a veto by Gov. Larry Hogan, writes Bryan Sears for the Daily Record. The 29-15-1 vote to override a veto on a bill that reconstitutes a panel that allocates state aid for school construction did not include Muse, a Prince George’s County Democrat. Muse, who was on the floor at the time of the vote, acknowledged the failure to vote was intentional and not an oversight but in doing so, violated chamber rules requiring members who are in their seats and on the floor to vote.

OVERRIDE ON TEACHER DISCIPLINE: A bill allowing public school teachers recommended for suspension or termination to bypass school board discipline hearings and use an outside arbitrator to decide the case will become law, despite Gov. Larry Hogan’s veto of the measure, Glynis Kazanjian writes in MarylandReporter.com. The Senate and House overrode the veto Thursday. 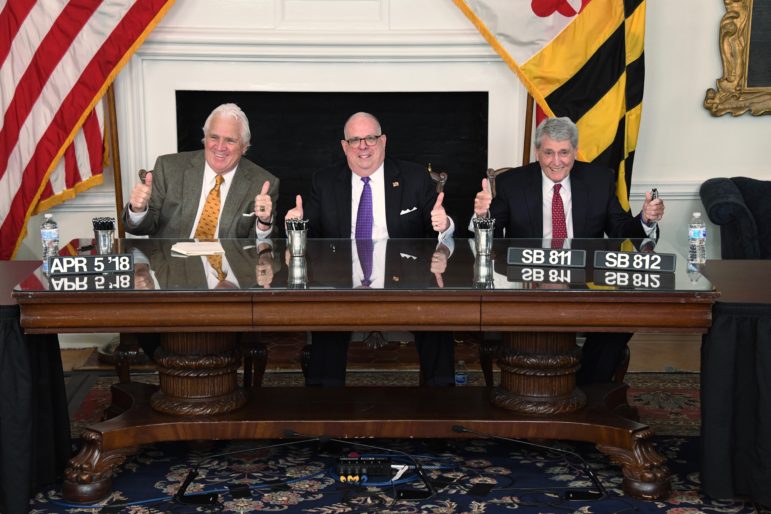 BILL SIGNING ROUNDUP: In a roundup of what bills were signed yesterday, Gov. Hogan inked legislation to bolster the state’s health insurance market in the wake of federal changes according to the Capital News Service. Hogan also signed the budget. Meanwhile, Maryland Attorney General Brian Frosh, alongside the Legislature’s Latino Caucus, announced the state is joining 19 others to sue the federal government over citizenship questions on the 2020 census.

AUTOMATIC VOTING REGISTRATION: Maryland will join 10 other states and D.C. in automatically putting residents on the voting rolls when they get a driver’s license, use a social services agency or buy insurance on the health exchange, Erin Cox of the Sun reports. Gov. Larry Hogan let legislation to create the program become law without his signature on Thursday, and it will take effect next July, after the 2018 election

SENATE OKs SCHOOL RESOURCE OFFICER BILL: Just weeks after a fatal shooting at a school in Southern Maryland, and with the nation focused on gun violence, the Maryland Senate gave final approval Thursday to a bill that would require a resource officer or police coverage for every public school, Ovetta Wiggins and Rachel Chason report for the Post. But lawmakers do not know how much the mandate would cost or how it would be funded.

DEBTORS’ PRISON: The Maryland Constitution – and 80 years of state case law – make clear that a person cannot be jailed for disobeying an order to pay money based on a debt. Yet, debtors’ prisons continue to exist in our state, Marceline White writes in a guest commentary for MarylandReporter.com. Legislation (SB 1050/HB 1081) to eliminate debtors prisons in Maryland has passed the Senate but is currently awaiting a vote in the House Judiciary Committee.

MANDATORY MINIMUMS: A delegate whose grandson was shot to death in Baltimore last Labor Day urged senators Thursday to pass legislation to impose mandatory minimum sentences on repeat gun offenders, a position at odds with the legislator’s more liberal views before the killing, the Daily Record’s Steve Lash reports.

MEDICAID DENTAL CARE: Del. Mike McKay’s quest to add adult dental care to the state’s Medicaid program is inching toward reality as a bill to create a pilot program nears passage in the Maryland General Assembly, Tamela Baker of the Hagerstown Herald-Mail reports.

BALTIMORE SUBWAY BILL: The Maryland General Assembly on Thursday approved legislation requiring Gov. Larry Hogan to allocate an extra $178 million over three years to the state agency that operates the subway in Baltimore, which was recently closed for a month for emergency repairs, Michael Dresser reports for the Sun.

CONVERSION THERAPY: Four Anne Arundel County delegates did not vote on a bill banning licensed medical professionals from practicing conversion therapy on children despite a personal speech from a Republican colleague, Chase Cook of the Annapolis Capital reports. Nic Kipke, Sid Saab, Michael Malone, and Seth Howard did not cast a vote after Del. Meagan Simonaire told members of the House of Delegates that her father, a state senator, considered the therapy when she revealed she was bisexual.

RASKIN ON MIDEAST TRIP: Louis Peck of Bethesda Beat reports that U.S. Rep. Jamie Raskin—back from his first trip abroad as a member of Congress since his 2016 election—returned home with decidedly mixed emotions. “We could be in meetings for hours with government officials, and leave in a very despondent mood,” recalls the Takoma Park Democrat, part of a legislative delegation to Israel, Jordan and Afghanistan. “… What gives me the most hope is all of the young people throughout the Middle East and Afghanistan who are working for peace and reconciliation and human rights for everyone.”

SINCLAIR CHIEF ON PRINT MEDIA: New York magazine’s Olivia Nuzzi corresponds with David Smith, the executive chairman of Maryland-based Sinclair Broadcast Group, who said he dislikes and fundamentally distrusts the print media, which he believes “serves no real purpose.” Smith said that print — as in newspapers and magazines — is a reality-distorting tool of leftists. Print media, he said, has “no credibility” and no relevance.

CORRECTION: Contrary to Tuesday’s story about Montgomery County’s daunting Democratic ballot, there is no third page. All Montgomery County ballots are two sides of a single page, the county board of elections reports.