OAKS PLEADS GUILTY: Former state Sen. Nathaniel T. Oaks pleaded guilty to two felony fraud charges Thursday in a political corruption case that federal investigators had built against him, acknowledging in U.S. District Court in Baltimore that he had engaged in a bribery scheme later revealed to be a sting operation, writes William Zorzi for Maryland Matters.

NOW WHAT? Oaks’ resignation from the Senate just hours before pleading guilty to federal charges Thursday has left the General Assembly with too little time left for a replacement to be named before the legislature adjourns April. 9. That means residents of the Democrat’s Northwest Baltimore district will have no Senate representation in the waning days of the legislative session, and some of his party’s priorities may face tougher passage without Oaks’ vote, Michael Dresser of the Sun reports.

SCHOOL CONSTRUCTION FIGHT: The Maryland Senate voted Thursday to overhaul the way the state approves hundreds of millions of dollars for school construction projects, ending a three-day legislative whirlwind that provoked Gov. Larry Hogan and Comptroller Peter Franchot to direct accusations of cronyism at the legislature, Scott Dance of the Sun reports.

PAST ACTS EVIDENCE: The Sun’s Michael Dresser reports that the House of Delegates bill that would permit prosecutors to introduce evidence of past assaults in some trials for sex offenses was approved by a Senate committee Thursday, clearing the way for it to be enacted. Because the panel made no changes to the House bill, all it will take is passage by the full Senate in its current form to send it to Gov. Larry Hogan.

NO TIME LEFT FOR PIPELINE FOES? Opponents of a planned gas pipeline that would go under the Potomac River near Hancock made a last-ditch legislative effort to stop the project this week, but time might be running out, Tamela Baker of the Hagerstown Herald-Mail reports. Columbia Gas Transmission, part of TransCanada, is seeking a federal permit to build the pipeline from southern Pennsylvania through Maryland and under the Potomac River near Hancock. It would connect with a pipeline planned by Mountaineer Gas in West Virginia.

DATA SOUGHT ON HYPERLOOP: John Fritze of the Sun reports that five members of Maryland’s congressional delegation are pressing Gov. Larry Hogan to provide more information about the high-speed transit system called Hyperloop that entrepreneur Elon Musk wants to build between Baltimore and Washington. Maryland officials in October granted permission for Musk’s company to dig tunnels under the Baltimore-Washington Parkway even as fundamental questions remain about federal and local oversight of the multibillion-dollar project.

ON THE PURPLE LINE: As the project gets under ways, Katherine Shaver of the Post interviews Fred Craig, chief executive officer for the Purple Line project’s contractor, Purple Line Transit Partners. He came to the Purple Line after 22 years of working for private consultants managing large construction projects, including roads, a streetcar line, a ballpark and a football stadium.

PILL MILLS: Legislation moving through the General Assembly would require the state to look into a tip line to report “pill mill” doctors while also setting up an annual report that would pull together more than a dozen data sets linked to overdoses. The bill doesn’t mention opioids specifically, but its intention is clear from House Minority Leader Nic Kipke’s testimony and the crisis facing the state,  Chase Cook of the Annapolis Capital writes.

DIGITAL AGE KIDS:Bethany Rodgers of Bethesda Beat writes that parents concerned about the proliferation of screens in the classroom are celebrating a win with the advance of a state bill aimed at guiding educators in the use of digital devices.

CYBERSECURITY STARTUPS: A Maryland bill would incentivize investors to put their funds in Maryland cybersecurity companies, attempting to overcome an apparent lack of capital for the state’s startups. The bill also brings in an administration plan to create a “Buy Maryland” program for cybersecurity products and services, a second program that supporters hope pushes the bill over the edge in the House of Delegates, Tim Curtis of the Daily Record reports.

NEW LEADERSHIP IN BLACK CAUCUS: Maryland’s Legislative Black Caucus has named its new leaders, but none are from Baltimore — the historical cradle of African-American political power in Maryland, reports Michael Dresser in the Sun. Del. Cheryl D. Glenn, the Baltimore Democrat who has led the caucus for the last two years, said Thursday that the caucus had chosen Del. Darryl Barnes of Prince George’s County as its new chairman.

HARRIS CRITICIZES BALTIMORE CITY: Responding to a question about gun control at a town hall meeting Wednesday in Carroll County, Rep. Andy Harris had some tough words for Baltimore, saying it was risky and “dangerous” to walk in the city’s downtown, John Fritze writes for the Sun.

UNION ENDORSEMENT QUESTIONED: The Baltimore County teachers union has yet to officially unveil its endorsement for Baltimore County executive, but it’s already stirring controversy within the Democratic primary. Both Vicki Almond and John Olszewski Jr. say Almond won the coveted Teachers Association of Baltimore County endorsement at a meeting of union representatives Wednesday night, though the organization has not publicly announced its pick for the race, Alison Knezevich of the Sun reports. 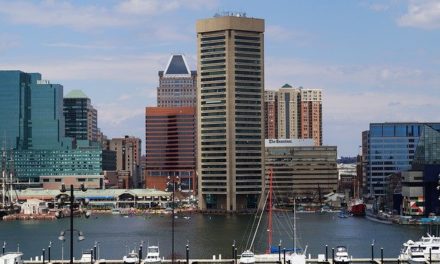