For students and staff at the private liberal arts college in Chestertown, the project offered a chance to help Shore communities address climate change by dealing with the shifting energy landscape. 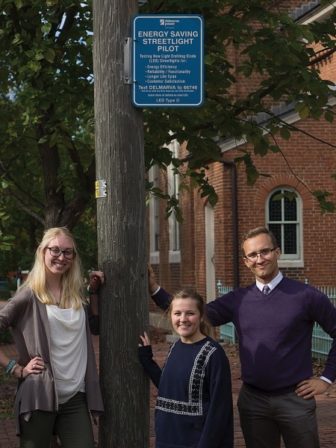 “The energy sector is an important force for change for the future,” explained Mike Hardesty, the associate director for the college’s Center for Environment and Society. “We’ve always wanted to get involved to assist the community to become more energy efficient.”

With funding from the Town Creek Foundation, the project’s student interns and staff pored over power bills and recommended cost-saving alternatives to nine Shore towns, two school districts and one county.

Grant Samms, an environmental sociologist who oversees the student interns’ work, said they contacted local government offices around the Shore to connect with town managers, public works directors or other staffers who dealt with energy. They initially pitched that by analyzing where the locality’s energy dollars were going, they could help identify opportunities for cost savings.

But they also pointed out the environmental benefits, Samms noted, of reducing power consumption and switching to renewable energy.

“There’s a general assumption when it comes to rural communities, they’re conservative and don’t care about climate change,” Samms said. “What we found is that may in part be true, but when you have a resource constraint, there’s always interest in saving money.”

Always an interest in saving money

The project started out working with Chestertown, home of the small liberal arts school. The municipality had already taken some steps to reduce energy costs, including the bidding out of electric supply contracts for all town meters and the installation of a 3-megawatt solar facility at its wastewater treatment plant.

Town Manager Bill Ingersoll said he’s constantly thinking about how to save money. The Shore Power project’s initial contribution to the town in that regard was more conceptual than detailed practical advice, he said.

“What they do is they may create a climate where you may want to think more about what you’re doing,” Ingersoll said. As a follow-up to the project’s initial study, he has since asked it to examine what the town’s paying for electricity generated by the solar facility to see if the savings promised by the provider have panned out.

In Easton, the Washington College group assisted the town in going forward with a plan to install new cost-saving LED streetlights.

“What was really helpful was having the Shore Power Project look at this and say, ‘If you did this, this could be your savings,’” said Kelly Simonsen, spokesperson for Easton Utilities. Within three years, with grants from the Maryland Energy Administration to help pay for the replacements, the new lights reduced the town’s electricity consumption by 30%, Simonsen said.

That LED streetlight replacement, which is continuing, has contributed to the town’s successful bid to become a Maryland Sustainable Certified community, she said.

“We needed someone to kind of look at our overall energy usage and things we could change and implement, so we could get that credential,” Simonsen explained. The certification “puts Easton in a place on the map to show we’re forward thinking and we’re doing things for our community to be more sustainable and (to) consider our environmental impact.”

The college has offered internships to seven students over the project’s five-semester lifespan, according to Hardesty. Three students have stuck with it and done repeat stints. And for at least one, it’s opened up a career path.

Tori Alpaugh said that working on energy usage data for the Shore communities while an undergraduate at Washington College piqued her interest. So, when the New Jersey native graduated in May 2016, she started looking for energy-related jobs.

Her search led to AWS Truepower, a renewable energy services provider based in Albany, N.Y., where she pitched her Shore Power experience.

“That was the No. 1 thing on my resume,” she said, “and the No. 1 thing we talked about on my interview.” Hired in August, she’s now a project coordinator, working with meteorologists, engineers and GIS specialists on large-scale renewable energy projects.

“I think it’s safe to say it’s the reason I got my job here,” Alpaugh said of the Shore Power project.

The foundation’s funding for the project ended last year; now, the college aims to continue the project as a fee-for-service consulting business. Even though communities are almost certain to realize long-term savings from taking steps to conserve energy and build in climate resiliency, Samms acknowledged that the upfront costs pose a “perennial challenge” for small towns with competing short-term priorities.

“So,” he said, “we are putting forward a hybrid system that is partially underwritten by support from our center and continued support from foundations, as they are realized. This will save towns money and lower the impediment to energy conservation measures.”

The center also wants to address another, non-financial barrier. The recent flurry of solar energy arrays cropping up on farmland across the Shore has generated a backlash in affected communities.

Samms said he hopes the project can conduct research and community outreach “to identify ways to truly lower the barriers to this type of development while ensuring it goes forward in a democratized manner.” The center hopes to get foundation support for that effort as well.

“We’ve proven it over and over again that there’s cost savings here,” Hardesty said. “Now that we’ve got a proven model in hand, we’re looking to expand on it.”

Opponents of immigrant tuition file petitions with over 40,000 signatures