The Hogan Administration is beginning to make a dent in a state waiting list that provides services for the developmentally disabled, but those on a waiting list of over 5,000 people who won’t qualify for 800 new slots opening up this year continue to seek relief.

“Everything for Adamma is on us — after school programs, behavioral support, family services,” said Alexandra Hayward, a 70-year-old Rockville woman who adopted four children through the foster care program and is raising her granddaughter. “They don’t even tell you how long the waiting list is. She needs help now!”

Late last year, the Maryland Department of Health announced two initiatives that would open up 800 slots for crisis candidates on the Developmental Disabilities Administration (DDA) waiting list. Currently there are 5,335 individuals on the DDA waiting list, according to the state Health Department.

“Our administration is proud to be able to proactively provide this additional support for individuals with developmental disabilities, their families, and caregivers,” Gov. Larry Hogan stated in December. “We have worked closely with families, advocates, and professionals to get the right combination of services to reduce the current waiting list, and ultimately improve the quality of life for Marylanders with disabilities.”

Funding for the additional 800 slots will cost taxpayers $22 million over two years, according to the state Department of Budget and Management.

Hogan has also called for an additional 100 slots to open up on the Maryland’s Home and Community Based Services for Children with Autism Spectrum Disorder waiver program in 2019, a program that served 1,100 children in 2018.

Years-long wait for help with autism

While Hogan added 100 slots to the waiver program in 2018, there are currently over 5,300 children on the autism waiver waiting list which is estimated to be as long as 10-years. A DDA staff member said people on the waiting list from the end of 2008 are only now being served.

“That would fund everything that she needs,” Hayward said of the autism waiver.

“We could really use respite [care],” Jenni Milton, 46, said of her adopted foster care son Aidan, 9, who was diagnosed with autism a year ago, but also suffers from traumatic brain injury from being shaken as a baby. “He needs speech [therapy], he needs physical therapy and occupational therapy. He needs to learn social skills and how to interact with other kids. . . And you get a piece of paper from DHMH saying you’re on a waiting list. It’ll probably be 12 years before he can use it.”

“You call the Department of Health and Mental Hygiene to apply for the autism waiver. They’re not accepting applications. You give them your child’s name, your name and they put you on a list. You get a letter. That’s it.”

Advocates of the developmentally disabled are pleased with the progress, but they are also asking the governor to “do the right thing” and fully fund a state mandate in the 2019 budget which calls for an increase in service provider wages.

The Minimum Wage Act of 2014 mandates a 3.5% annual increase in DDA community support services spending for fiscal years 2016 through 2019.

“The governor gets a lot of credit for doing this, but so do our champions in our legislature,” said Ande Kolp, the executive director of the ARC of Maryland. “This was really a non-partisan effort.”

Kolp said that two lawmakers in particular, Sens. Edward Kasemeyer and Guy Guzzone, D-Howard, deserve credit for creating legislation in 2014 that called for service provider wages to coincide with the state’s new minimum wage increase. While the bill by Kasemeyer and Guzzone didn’t get adopted, the intent of it was folded into the Minimum Wage Act of 2014.

“Service providers can’t recruit and retain qualified caregivers, if turnover is high,” Kolp said, stating that wages in this industry need to be 30% higher than minimum wage. “If they are having trouble finding service providers to take care of the people they already have commitments to, they’re less inclined to accept new positions.”

“Reducing these waiting lists has been and will continue to be a priority for the Hogan administration. Working with the constraints of our budget, as we cannot spend more money than we bring in, the DDA budget has grown considerably, reflecting the governor’s priorities.”

Shirk said the while the state general fund budget has grown 11% since Hogan took office, the DDA Community Services budget – which administers the waiver programs – has grown 19%.

“The good news is over the course of the last couple of years, the funding has been more consistent and they’ve developed some interesting ideas to help folks,” Guzzone said. “The fact they are funding the crisis list and they took out these waivers are useful tools.” 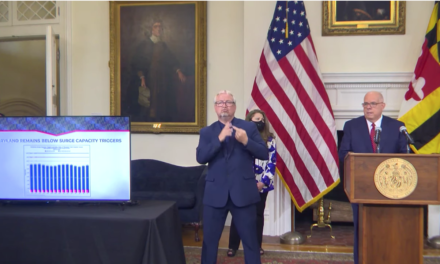