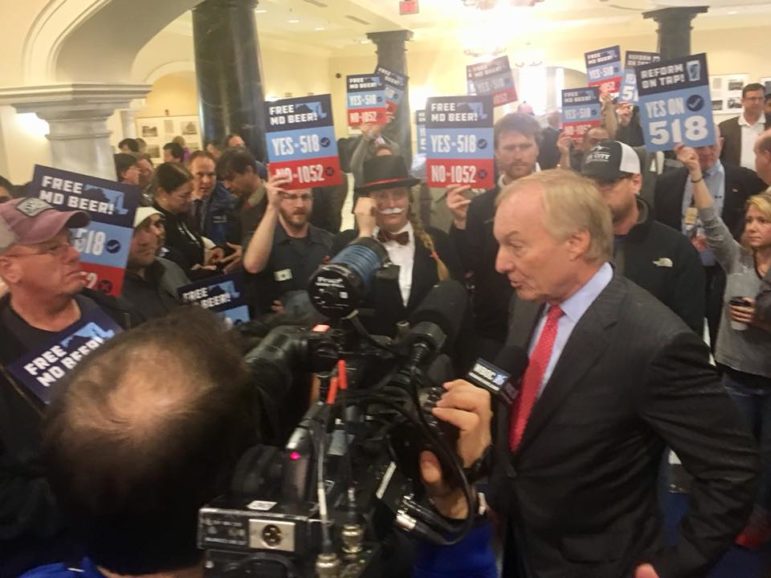 Comptroller Peter Franchot talks to reporters outside hearing room surrounded by supporters of his beer legislation. From Facebook.

BEER BATTERED: Comptroller Peter Franchot took his case for fewer limits on the state’s craft brewers before a panel of lawmakers whose hearing room turned into a lion’s den Friday as delegates accused him of fomenting rancor over the issue, Michael Dresser reports in the Sun. Franchot had promoted the hearing on his Facebook page like a boxing match that he dubbed the “Fight for Maryland Beer” and had recently labeled lawmakers who were opposing him as idiots.

PURPLE LINE BUSINESS IMPACT: Maryland lawmakers are considering whether business owners who will live through four to five years of Purple Line construction should have financial help to make sure they’re still around to enjoy its potential benefits, writes Katherine Shaver in the Post. One proposal would grant credits toward the business owners’ state property and income taxes for lost revenue. Another would allocate $1 million for grants to help offset losses.

RED FLAG LAW: In an op-ed in the Annapolis Capital, Michael Collins urges the legislature to consider passing a red flag law, which would allow concerned family members and friends to warn authorities who could prevent someone who is mentally ill — or suicidal —from obtaining firearms or could even temporarily confiscate firearms that person may possess. He tells a personal story about how such a law could help.

MINIMUM WAGE HARMS LOW-WAGE WORKERS: Mike O’Halloran of the National Federation of Independent Business, in a column for MarylandReporter, writes that, as the Maryland General Assembly considers increasing the state’s minimum wage to $15 an hour with a hearing Tuesday, the low wage workers those bills are intended to help may end up out of a job. The latest minimum wage research shows there is a tipping point where the resulting job losses are so significant, that people at the low end of the pay scale are hurt far more than they are helped.

CUMMINGS CRITICAL OF STATE ON METRO SHUTDOWN: U.S. Rep. Elijah E. Cummings on Friday joined a growing chorus of criticism of the state’s handling of Baltimore’s Metro shutdown and requested the Maryland Transit Administration hand over a series of documents to explain the decision, reports John Fritze for the Sun.

HOW NOT TO HELP ADDICTS 2: Baltimore Health Commissioner Leana Wen, in an op-ed in the Sun, criticizes proposed legislation, sponsored by Del. Andrew Cassilly, that she said “ will turn back the clock on this progress.” Cassilly justifies the bill by saying, “Many addicts are now using Narcan, funded by taxpayers, as a safety net while they continue to abuse these drugs.” This bill, Wen writes, reflects a fundamental misunderstanding about the nature of addiction. Scientific studies have demonstrated unequivocally that addiction is a disease.

DEL. McMILLAN WON’T SEEK RE-ELECTION: Del. Herb McMillan, a fixture of Anne Arundel politics and a Republican delegate for over a decade, will not run for re-election in 2018, Phil Davis reports for the Annapolis Capital. In a column submitted to The Capital, the District 30A delegate wrote that his decision is because he’s “tired of political bosses in general, and their games in particular.”

LEOPOLD TO RUN: Former Anne Arundel County Executive John Leopold, who resigned after being convicted of abusing that office in 2013, filed Friday to run for a seat in the House of Delegates, Pat Furgurson of the Annapolis Capital reports. The 74-year-old Pasadena Republican, who served 30 days in jail and another period of house arrest, is running in District 31B, which was created after he left the House in 2006 to serve as county executive. It includes the area he served as a delegate for 20 years.

DIXON WON’T RUN FOR SENATE: Former Baltimore Mayor Sheila Dixon (D) has opted against running for the state Senate this year. In a post on her Facebook page, Dixon said she was not yet ready to return to the political arena after an intensive attempt to win her old job back in 2016. “I have come to realize that I am not yet ready to put my family through another grueling political campaign,” Dixon said.

FROSH URGES JUSTICES TO KEEP DISTRICTS: With the Supreme Court poised to rule on political gerrymandering this year, Maryland Attorney General Brian E. Frosh urged the justices to uphold a congressional district Republican voters say the state’s Democratic-led General Assembly redrew unconstitutionally to replace a GOP House member with a Democratic one. Steve Lash of the Daily Record reports that in court paper filed Wednesday, Frosh said the Republicans cannot show that the 6th Congressional District violates the First Amendment right of GOP voters to political association because, they claim, the legislature deliberately redrew the district to ensure the election of a Democrat and in “retaliation” for the district having elected a Republican.

***FAMILY FARM USES THE LATEST ADVANCEMENTS: This farm may date back to the Depression era, but its practices have kept up with the times. Hutchison Brother Farm’s follows GreenSeeker, a system using sensors and computerized applicators to apply just the right amount of fertilizer. Using optical sensors to assess how each plant is growing, the computer program then varies the rate of fertilizer applied to that crop based on what it senses the plants needs. This precise fertilization makes for healthier plants and prevents nutrient runoff into waterways. Read the farm’s story. SPONSORED CONTENT***

EDUCATORS PUSH BACK ON ARMING TEACHERS: Maryland educators are pushing back against President Donald Trump’s call for more armed adults in schools while saying they’re open to new ideas about how to make school facilities more secure following last week’s shooting in Florida that left 17 people dead, Talia Richman and Liz Bowie of the Sun report.

UNITY IN OPPOSITION: Maryland Democrats face a host of problems in unseating Republican Gov. Larry Hogan, but disunity doesn’t appear to be one of them, Michael Dresser of the Sun reports. At a forum Saturday at Baltimore’s War Memorial, seven contenders for the Democratic nomination for governor pledged their unwavering support for the winner of the June 26 primary. None hesitated, wavered or hedged their bets.

GLOVES TO COME OFF: In the first of a two-part series analyzing the gubernatorial race, Josh Kurtz of Maryland Matters writes that part of the reason the voter support in the Democratic race appears so fluid is that most of the candidates aren’t very well known. And no one has done much yet to break out from the pack. All of the candidates have been critical of Hogan, and they have sought to remind voters that the governor belongs to the same political party as President Trump. At a candidate forum in Baltimore this weekend, the seven leading Democrats were polite to each other and each pledged enthusiastically to support the eventual nominee. Yet there’s evidence that the gloves may soon be coming off.

DOES RUNNING MATE MATTER? One by one, the Democrats running for Maryland governor rolled out their lieutenant governor picks this month, each heralding their choices as offering crucial balance to their tickets — a woman running with a man, black with white, young with old, straight with gay, Washington suburban leaders with Baltimore’s best. But do running mates really matter? Erin Cox of the Sun searches out the experts to answer the question.

MO CO EXEC CANDIDATES FORUM: A crowded field of candidates for Montgomery County executive took on the issues of racial equity and immigrant rights at a forum Sunday, mostly agreeing on the need to do more for underserved residents but splitting on the potential impacts of the Purple Line and on what the county’s top priorities should be, reports Jennifer Barrios for the Post.