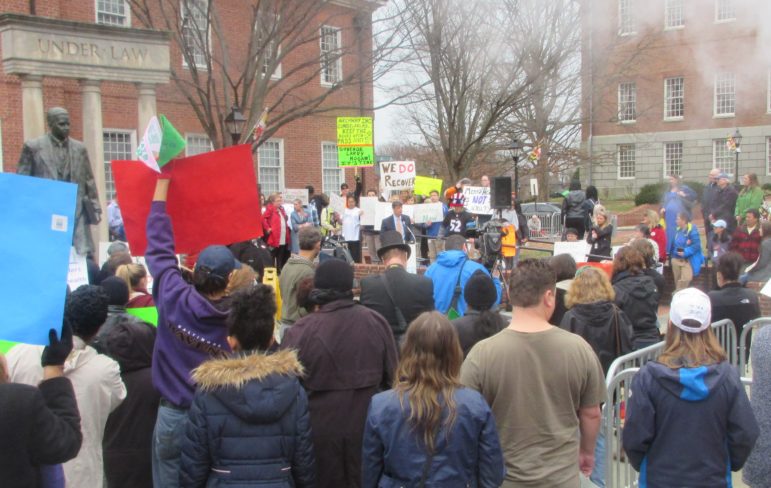 BEER MONOPOLY: Calling state lawmakers “ham-handed” idiots is not a typical recipe for passing proposed legislation in the Maryland General Assembly, Scott Dance of the Sun reports. But that’s how Comptroller Peter Franchot has characterized lawmakers whose support he needs for a bill that he says would give small craft beer makers a better chance to compete against the “corporate beer monopoly.”

PROTECTING AGAINST INTERFERENCE: As details emerge of the Russian campaign to influence the 2016 election, officials in Maryland are working to protect the state’s voting system for this year and beyond, Michael Dresser of the Sun reports. State elections officials are working with federal authorities to shore up Maryland’s defenses against tampering with electronic voting systems and electoral rolls. Lawmakers have introduced proposals to fix perceived flaws, audit results more rigorously and to compel greater disclosures about advertising on social media.

JUDICIAL PAY RAISES: The House of Delegates Thursday rejected Republican attempts to lower a proposed pay raise for judges and tentatively approved a plan to give the 313 judges $20,000 more over the next four years, reports Len Lazarick for Maryland Reporter. House Appropriations Committee Chair Maggie McIntosh said the raises were necessary to keep attracting the best talent to serve on the bench. But the raises of $5,000 per year for the next four years were also the amount that their Senate counterparts would agree to, she said.

CYBERBULLYING BILL: The chairman of the Senate Judicial Proceedings Committee said Thursday that a bill that stiffens penalties against online bullying will “fly out of committee,” writes Bryan Sears for the Daily Record. Sen. Bobby Zirkin, D-Baltimore County and sponsor of two bills that expand prohibitions known as Grace’s Law, made the comments to high school students working as Senate pages. Later, Zirkin told a reporter that a similar law is needed for adult online behavior

ORGAN DONOR BILLS: The Maryland House of Delegates on Thursday unanimously passed two organ donations sponsored by House Speaker Michael E. Busch, whose life was saved by a liver transplant last year, Michael Dresser of the Sun reports. One would provide a $7,500 tax credit for living donors to help defray their costs of donating all or part of an organ. Busch’s sister, Kathleen “Laurie” Bernhardt, donated part of her liver to the speaker, who was diagnosed last spring with nonalcoholic steatohepatitis, a life-threatening condition. The Anne Arundel County Democrat has since recovered and resumed his duties as speaker.

BUSCH SUCCESSORS: Speaker of the House Michael E. Busch (D) is looking and feeling better after receiving a liver transplant from his sister eight months ago. He’s far more healthy and energetic than he was during the 2017 General Assembly session and the weeks that followed, reports Josh Kurtz in Maryland Matters. But that still hasn’t stopped rampant speculation in Annapolis about his possible successors as House speaker – and imagined if invisible jockeying among the leading contenders.

WORK ZONE SPEEDING: The Maryland House of Delegates voted Thursday to increase penalties for third-time offenders caught by cameras exceeding the speed limit in highway work zones, Michael Dresser of the Sun writes. The 80-59 vote sends the measure to the Senate, writes Michael Dresser in the Sun.

MARYLAND SETTLEMENT ON FAULTY AIRBAGS: Maryland, Virginia and the District on Thursday were among dozens of states to reach a $650 million settlement with the U.S subsidiary of a Japanese company that manufactured faulty air bags installed in millions of automobiles worldwide, bags that sprayed deadly shrapnel that killed at least 22 people and injured hundreds more, Ashley Halsey of the Post reports.

** HEALTHY SOIL KEY TO MARYLAND FARMS: Prince Frederick farmer Benson Tiralla says that soil health is one of the most important aspects of farming. Monnett Farms was certified in the Farm Stewardship Certification and Assessment Program, which recognizes farms that have achieved high levels of environmental stewardship. Efforts like these by Maryland’s farmers are imperative to improve soil quality through nutrient management and keep the waterways clear. Read their story. SPONSORED CONTENT***

LEAVING CHESAPEAKE BAY PROGRAM: As Nick DiPasquale wrapped up his 6 1/2-year tenure at the helm of the state-federal Chesapeake Bay Program partnership, the Bay has had some of its best water quality in years. Underwater grass beds have surged to their highest level in decades, writes the Bay Journal’s Karl Blankenship in MarylandReporter.

KAMENETZ-ERVIN TEAM HIT THE ROAD: On their first day on the campaign trail together, Democratic gubernatorial contender Kevin Kamenetz and his just-announced running mate, Valerie Ervin, played up their similarities, describing themselves as tell-it-like-it-is policy wonks with a passion for closing the achievement gaps in Maryland’s schools, Bruce DePuyt of Maryland Matter writes. “Valerie is the right pick because — No. 1 — she can govern,”

BEING THE CHANGE: In a profile of gubernatorial running mate Brandon Scott, Deborah Bailey writes for the Afro that Baltimore City Councilman Scott, (33) and Jim Shea (65) are ready to “be the change” said Scott, uniting Marylanders across generations, and re-invigorating the governor’s race. “Our age difference won’t be our weakness, it will be our strength.”

HOGAN FILES FOR RE-ELECTION: While the news will surprise no one, Gov. Larry Hogan (R) formally announced his intention to run for reelection on Thursday, writes Josh Kurtz for MarylandReporter. In a Facebook video shot Thursday morning, Hogan and Lt. Gov. Boyd Rutherford (R) are shown walking into the Maryland State Board of Elections in Annapolis and then filing their candidacy papers.