BARROOM BRAWL: A year after Maryland lawmakers shepherded a beer industry compromise intended to help new breweries expand, the debate is beginning anew this week — and is looking as if it might devolve into a barroom brawl, Scott Dance of the Sun reports. The first punches in the beer-fueled legislative fight could come in a House of Delegates committee room on Friday. “There will be fireworks,” said Kevin Atticks, executive director of the Brewers Association of Maryland.

SCHOOL INVESTIGATIVE OFFICES: Prompted by alleged grade-fixing in Prince George’s County Public Schools and perjury and theft allegations in the Baltimore area, a pair of bills in the General Assembly would establish investigative offices to oversee schools in Maryland, Hannah Brockway of CNS is reporting. Republican Gov. Larry Hogan and a Democratic lawmaker each are attempting to get their own education accountability bills passed this year.

METRO DEAL COMING TOGETHER: Del. Maggie L. McIntosh was stunned. The veteran lawmaker, who chairs the powerful House Appropriations Committee, had just heard nearly 90 minutes of testimony in which people who typically disagree were all on the same side. All favored giving Metro more state money. The unanimity was a sign of the political momentum in Maryland, Virginia and the District propelling what would be a landmark deal to provide permanent, dedicated funding for the regional transit system, Robert McCartney reports for the Post.

PAIN KILLER ADDICTION: Frederick resident Pamela Knight said a fall off wooden bleachers while cheering on her son at a football game led to addiction and withdrawal that had her convinced she was dying. The Frederick News-Post’s Kelsi Loos reports that after the accident, her doctor prescribed pain medication, which she said ultimately became her drug of choice. Now a recovery awareness advocate, Knight spoke Wednesday in support of a bill that would require prescribers to talk with patients about the risks associated with opioids before writing them a prescription.

911 TEXTS: Maryland residents who are deaf or have speech disabilities — or anyone with a reason to ask for help silently — could soon use their cellphones to send and receive 911 requests by text, Michael Dresser and Alison Knezevich report in the Sun. The state Board of Public Works voted Wednesday to approve a $2.4 million contract that will allow emergency responders across Maryland to receive and respond to 911 texts.

CITY CRIME DECLINE: Gov. Larry Hogan and Mayor Catherine E. Pugh say a joint operation with U.S. Marshals over the last month resulted in hundreds of arrests of violent offenders — an effort officials say contributed to the recent declines in crime in Baltimore to start 2018, Luke Broadwater of the Sun writes.

PUSHBACK ON ENTRAPMENT CLAIM: In the escalating war of pretrial motions, prosecutors in the public corruption case against state Sen. Nathaniel T. Oaks are pushing back hard against defense assertions that the West Baltimore Democrat was entrapped by federal authorities in the ongoing probe, William Zorzi reports for Maryland Matters.

BACK TRACKING ON ELECTION OBSERVERS: A heightened fear of Russian meddling in American elections helped derail what its sponsors thought was “a simple bill” to regulate how international observers witness Maryland elections, reports Len Lazarick for MarylandReporter. The bill was so straightforward that it sailed out of the Senate committee unanimously, with all four conservative Republicans supporting the measure by Sen. Cheryl Kagan and Jim Rosapepe, two liberal Democrats. Then Republican leaders began having second thoughts about SB190, why might foreigners be coming to Maryland and what the heck were the Russkis doing in our polling places, anyway.

POLL ON GOV RACE, MANNING V. CARDIN: Maryland’s Democratic gubernatorial primary race is wide open, according to a poll by Goucher College released just days before the campaign filing deadline. Nearly half of the Democrats who are likely to vote in the primary say they have no preference among the seven candidates in the race, and the majority say they don’t know enough about the candidates to form an opinion, Ovetta Wiggins of the Post reports. 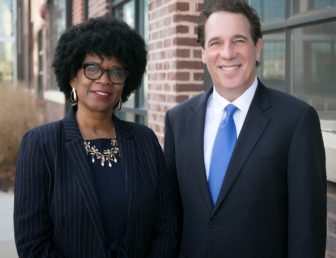 KAMENETZ PICKS ERVIN: Baltimore County Executive Kevin Kamenetz has selected former Montgomery County Councilwoman Valerie Ervin as his running mate in the race for governor, adding a progressive voice from the Washington suburbs to his effort to win the Democratic nomination, writes Pamela Wood in the Sun.

LIBERTARIAN CHALLENGES SARBANES: A high-ranking official of the Maryland Health Department is seeking the nomination of the Libertarian Party to challenge U.S. Rep. John Sarbanes (D), writes Josh Kurtz for Maryland Matters. J. David Lashar, the agency’s former chief of staff who is currently working as its senior transformation executive in the Office of Enterprise Transformation, is competing for the nomination at the Libertarians’ March 10 state convention. He is the only candidate in the race so far.