GOUCHER POLL RESULTS: Pamela Wood of the Sun writes that according to the latest Goucher Poll, Gov. Larry Hogan continues to have strong approval ratings from Marylanders as he heads into his re-election effort.

HEALTH INSURANCE MANDATE: Responding to the federal repeal of the individual mandate requiring everyone to have health insurance, Maryland lawmakers are considering legislation that would impose the requirement at the state level, reports Andrea McDaniels in the Sun. “We need to find some way to stabilize the individual insurance market. The premium increases we are facing are really high if we don’t,” said Sen. Brian J. Feldman, a Montgomery County Democrat and sponsor of the bill.

TRUTH ABOUT DRUG FACILITIES: Del. Dan Morhaim disputes the conclusions in a piece written by Brian Griffiths of Red Maryland, writing in MarylandReporter.com that there is no one-size-fits-all method for drug treatment. Supervised Consumption Facilities are proven effective in reducing drug use, reducing disease, reducing discarded needles, reducing crime, and getting people into treatment. Equally important, there have been no overdose deaths in any of the facilities in operation because a trained rescuer is present at all times.

LAWYERS MALL & FIRST AMENDMENT: The editorial board of the Annapolis Capital opines that, “We’re not lawyers, let alone constitutional lawyers. But after U.S. Supreme Court decisions holding that monetary contributions to candidates — even by corporations — are an exercise of First Amendment rights, we are curious about how the state is going to argue that free speech isn’t involved when groups ask for contributions. Neither are we clear about how such requests are a threat to the safety of people crossing Lawyers Mall.”

TEXT-BOOK TAX HOLIDAYS: Brooks DuBose of the Diamondback writes that a new bill seeks to create tax holidays for the next academic year. The bill, which will be heard in the state Senate on Feb. 28, would establish two tax periods — each of them one week long — at the end of January and August when all college textbooks would be tax-free, Sen. Gail Bates of Howard County said. The holiday would apply only to current college students who are buying a required book for a course, she added, and would not be available for online book purchases.

LAW & ORDER BILLS: A bipartisan group of legislators is working on an omnibus crime bill that would permit enhanced penalties for illegal gun possession and increase funding for witness relocation programs, among other law-and-order provisions, Steve Lash of the Daily Record reports.

MODELING MARYLAND: With survivors of the Feb. 14 mass shooting in Parkland, Fla. — which killed 17 — and other advocates calling for Congress to take action to prevent future school shootings, gun laws like Maryland’s are being debated on a national scale, Michael Dresser reports for the Sun.

VAUGHN TRIAL TO BEGIN: The trial of a former Maryland state delegate accused of accepting cash for votes is set to begin today in federal court — a case in which prosecutors are expected to introduce bank statements and other evidence to show that Michael Lynn Vaughn allegedly acted criminally while he was in financial distress, according to court filings, Lyn Bui reports in the Post. Vaughn, 60, was charged last year with bribery and conspiracy in an alleged scheme involving the Prince George’s County liquor board and local liquor store owners. He has pleaded not guilty.

DELEGATE RACE A FAMILY FEUD? Prince George’s County Councilmember Mary A. Lehman has quietly joined the Democratic primary for House of Delegates in District 21 – and now finds herself running against a former boss and a former aide, Kaanita Iyer of Maryland Matters reports. The family affair – or family feud, depending on one’s perspective – includes two incumbents, Del. Joseline Pena-Melnyk and Del. Benjamin S. Barnes, who are both completing their third terms. Lehman worked for Pena-Melnyk before she was elected to the county council in 2010.

FOUR WOMEN RUNNING MATES: Four out of the five Democratic gubernatorial candidates in Maryland who have announced their running mates have chosen women to join their ticket, a sign of the importance of female voters in a state that has no women in Congress or in top statewide positions, the Post’s Ovetta Wiggins reports. 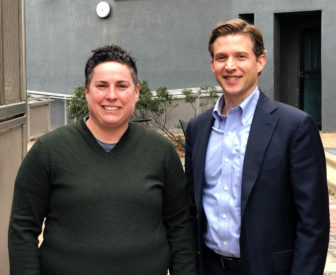 ROSS’s RUNNING MATE: Josh Kurtz of Maryand Matters writes that like gubernatorial hopeful Alec Ross, Verratti, a Silver Spring native, has never sought or held elective office. But she is, like Ross, a veteran of the Obama administration, where she worked in the Small Business Administration, focusing on the Affordable Care Act, veterans’ entrepreneurship, women’s business ownership and local economic development policies. “To be honest, I never thought about running before,” she said in an interview.

ON THE AIR WITH HOGAN: In this 50-minute broadcast, Gov. Hogan goes on the air with Tom Hall of WYPR-FM to discuss a variety of issues. Later, Bryan Sears of the Daily Record gets on the line with Hall to discuss the governor’s remarks.

MANNING FOR SENATE: When Chelsea Manning leaked hundreds of thousands of military and diplomatic documents to the anti-secrecy site WikiLeaks eight years ago, she said she hoped the decision would provoke a debate about U.S. foreign policy, John Fritze writes in the Sun. Now the 30-year-old transgender woman, running for the Democratic nomination for the U.S. Senate in Maryland, says there is another urgent discussion voters must face: how a burgeoning military apparatus is gradually creeping into domestic life in places like Baltimore.

MANNING’s STUNT: In a column for Red Maryland, Brian Griffiths writes that Chelsea Manning’s recent tweets certainly give credence to the idea that her Senate campaign is nothing more than a publicity stunt that is designed to stretch out the remainder of her 15 minutes. There aren’t a lot of jobs out there for traitors. Griffiths then takes Maryland Democrats to task for ignoring her.

REA TO CHALLENGE SARBANES: Annapolis Democrat John Rea will challenge incumbent Rep. John Sarbanes, D-Baltimore County, for the party’s nomination for the state’s 3rd District seat in the House of Representatives. Rea has run for various public offices for more than two decades, running for Congress as far back as 1996, writes Phil Davis for the Annapolis Capital.

DISTILLERIES IN ARUNDEL: Chase Cook of the Annapolis Capital writes that in 2015 Anne Arundel County opened its zoning laws up to breweries, a move popular in state and local governments as micro breweries grow in popularity. And Anne Arundel County already has laws in place to support wineries. But what about liquor? That’s something both County Councilman Andrew Pruski, D-Gambrills, and Jerry Walker, R-Crofton, hope to fix with legislation that will uncork the county’s zoning legislation for distilleries.