Lt. Gov. Boyd Rutherford and Gov. Larry Hogan stand with the portrait of Frederick Douglass that hangs in one of the main public rooms of Government House, the governor's mansion. Governor's Office Photo.

Today, February 14, marks the 200th birthday of Frederick Douglass, or at least the day the famed abolitionist, writer and orator marked as his birthdate in 1818, since there were no records kept of the enslaved people in Talbot County on the Eastern Shore.

The irony of one of the most famous Marylanders in American history is that he had to flee the state of his enslavement to become famous. And once his first autobiography was published at the age of 27 in 1845 — “Narrative of the Life of Frederick Douglass, An American Slave” —  becoming a best seller and one of the most influential pieces of abolitionist writings, he had to flee to Europe lest his old slave master track him down. Supporters eventually purchased his freedom — for $711, his great-great-great grandson Kenneth Morris Jr. recalled at the State House Tuesday.

Morris is president and co-founder of the Frederick Douglass Family Initiatives. One of its goals is to distribute a million copies of the “Narrative” this year.

Morris and other descendants of the great abolitionist were on hand for Gov. Larry Hogan to proclaim “The Year of Frederick Douglass” and announce a new 131-mile driving tour “Frederick Douglass: Following in His Footsteps” that highlights areas of his life from his birthplace near Tuckahoe Creek in Talbot County to Fells Point, where he worked and learned to read, and to his home in Washington, where he was an adviser to Abraham Lincoln.

Hogan also suggested that statues of Douglass and the other famed Maryland abolitionist Harriet Tubman be placed on the State House grounds, near where the statue of Chief Justice Roger Taney, author of the pro-slavery Dred Scott decision, sat until the governor had it removed last year. 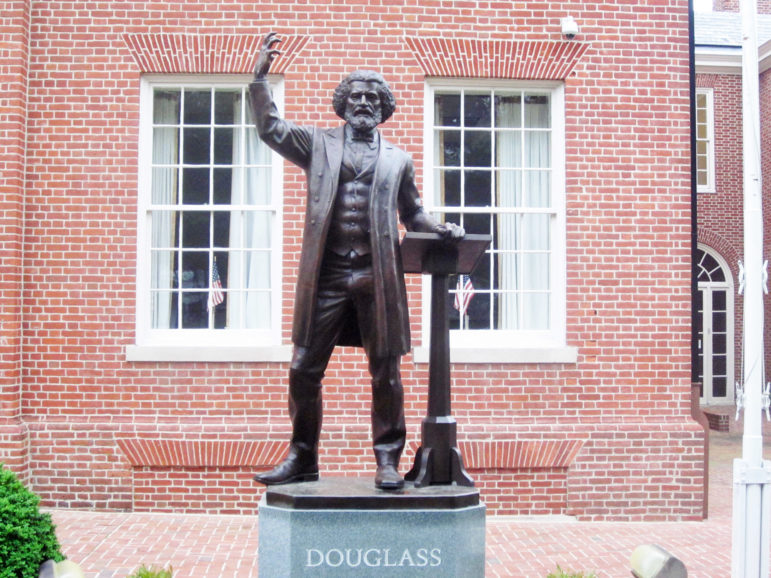 This statue of Frederick Douglass stands in front of the Talbot County courthouse. Lt. Gov. Boyd Rutherford is scheduled to lay a wreath there today. MarylandReporter.com photo

Douglass visited the State House in 1874, and reportedly recited George Washington’s speech resigning his commission in the old Senate chamber.

There will be many events throughout the year celebrating Douglass’s life. These included a speech last week at the Maryland Historical Society in Baltimore by David Blight, a Yale University professor of history and author of a forthcoming book, “Frederick Douglass: Prophet of Freedom.” 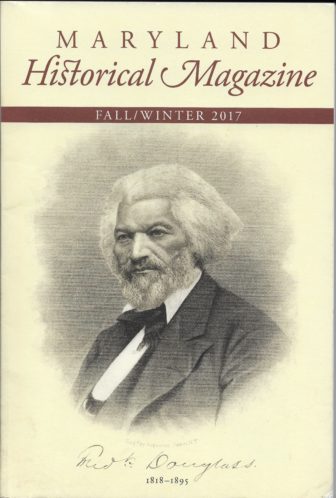 One of the more famous photos of an aged Frederick Douglass graced the cover of the most recent Maryland Historical Magazine.

Douglass was “a man of words — the only form of real power he ever had,” said Blight. Douglass made his living as a writer and traveling orator, and authored three autobiographies, none as successful as the first.

After the Civil War and the abolition of slavery, Douglass went from being “a radical abolitionist to a Republican functionary,” Blight said.

One of the many interesting facts about Douglass was that “he was the most photographed American of the 19th century,” Blight said, with 162 extant photos, just surpassing the number for General George Armstrong Custer of the Little Bighorn defeat.