SICK LEAVE TO TAKE EFFECT: Many business owners in Maryland are scrambling to prepare for the state’s new sick-leave policy, which takes effect Sunday despite a veto last year from Gov. Larry Hogan (R) and a last-ditch attempt by the state Senate to delay it, the Post’s Josh Hicks reports. 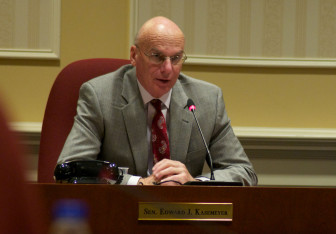 SEN. KASEMEYER TO RETIRE: State Sen. Ed Kasemeyer (D-Howard), the chairman of the powerful Budget and Taxation Committee, told his colleagues Thursday that he does not plan to seek reelection this year, Josh Kurtz of Maryland Matters reports. Kasemeyer, 72, could not be reached for comment, but his looming retirement creates dominoes both on the committee and in the 12th District, which takes in portions of Howard and Baltimore counties.

FAILURE TO REPORT: Advocates for children told a House panel Thursday that teachers, medical professionals and others who fail to report child abuse must face tougher sanctions than current law allows, Bruce DePuyt of Maryland Matters reports. Backers of HB 500 told the House Judiciary Committee that Maryland is one of only two states that doesn’t provide for jail or financial penalties when “mandatory reporters” — educators, doctors, nurses, social workers and others — fail to contact child protective services when they have knowledge of sexual or physical abuse.

CHICKEN FARMS & AIR POLLUTION: The rise of industrial-scale chicken houses on Maryland’s Eastern Shore in recent years has raised questions about their impact on residents’ health. Legislation pending in the General Assembly seeks to answer one of them: What are they putting into the air? Lawmakers are weighing a study of whether huge chicken farms are polluting the air around them — a new front in an ongoing debate over how the state’s expansive poultry industry affects the environment, Scott Dance of the Sun writes.

BACK TO SUPERINTENDENT: Several Baltimore lawmakers want to turn back the clock and junk the chief executive title for the head of Baltimore City schools. If the bill were to pass, CEO Sonja Santelises would become a superintendent much like the leaders of Maryland’s 23 county school systems on July 1, the Sun’s Michael Dresser reports.

OPIOID-RELATED LAWSUITS: Attorney General Brian Frosh asked a court this week to order a manufacturer of a fentanyl spray to turn over records that investigators think could shed light on deceptive marketing practices, Ian Duncan of the Sun reports.

PARENTAL RIGHTS: A long-stalled measure to give victims of rape the ability to have the parental rights of their attackers terminated is heading to Gov. Larry Hogan’s desk, and he is expected to promptly sign it, likely within days, writes Bruce DePuyt for Maryland Matters.

SHIELDING SURVIVORS: Domestic violence, stalking and human-trafficking survivors would be given an opportunity to shield property records from abusers under three identical bills in the General Assembly this session. Sean Whooley of the Capital News Service reports that Maryland’s Safe At Home Address Confidentiality Program already provides a substitute address, cloaks a survivor’s location and includes a free mail-forwarding service. Del. Anne Healey, D-Prince George’s, the sponsor of one version of the bill, said the purpose of the legislation is to turn what is already practice into concrete law.

*** REPORT HAILS CHESAPEAKE BAY IMPROVEMENTS: Decades of cleanup efforts have improved conditions in the Chesapeake, including rebounding populations of underwater grasses, a key indicator of the estuary’s health. Farmers have stepped up to clean up the Bay, and it’s paying off. Here are five ways you can help. SPONSORED CONTENT***

BED RAILS IN NURSING HOMES: Asking nursing homes to provide bed rails for residents at risk of falling out of their beds might seem like a simple request. Except that it isn’t, writes Tamela Baker in the Hagerstown Herald Mail. Sen. Andrew Serafini, R-Washington, on Thursday presented to the Senate Finance Committee his proposal to require nursing homes to provide a resident with a bed that has bed rails if requested.

HAPPY NEW YEAR: Though Thursday evening was chilly, Maryland’s first lady Yumi Hogan stood near the front door of Government House warmly greeting guests as they entered. More than 200 guests were welcomed into the governor’s mansion on State Circle in Annapolis for an evening celebration of the upcoming Lunar New Year, which begins Feb. 16, the Annapolis Capital’s Wendi Winters writes.

HOLT RUNS FOR STATE SENATE: Annapolis resident Chrissy Holt announced Wednesday her candidacy for the Maryland Senate in District 30, Chase Cook of the Annapolis Capital writes. The Democratic candidate plans to bring her 25 years of business experience to the Senate, according to a press release. She has been an advocate for Medicare-for-all option for families of uninsured patients with costly illnesses.

A DIFFERENT TYPE OF FORESTER: Tom Horton of the Bay Journal writes about Larry Walton, whom he describes as a different type of forester, managing a tree stand for a Virginia forestry products company along the Chesapeake. Walton would clear cut pine but also leave stands of hardwood to grow. The article appears in MarylandReporter.

UNDERWATER: Whitney Pipkin of the Bay Journal writes that, although it begins with aerial shots of the seemingly endless tidal marshes in Maryland’s Dorchester County, the latest Bay Journal documentary is about a fast-approaching future in which that landscape could be entirely underwater. The article appears in MarylandReporter.

ANOTHER UNION BACKS ALSOBROOKS: Another union that previously supported Donna F. Edwards is throwing its support behind one of her Democratic primary rivals, State’s Attorney Angela Alsobrooks, in the race for Prince George’s County executive, Rachel Chason reports for the Post.

O’MALLEY DISSES TRUMP PARADE IDEA: It would appear Martin O’Malley doesn’t like President Donald Trump’s desired military parade, Sean Walsh of the Sun reports. In a string of tweets Wednesday evening, O’Malley — the former Maryland governor and Baltimore mayor — expressed disdain for the planned “large-scale military parade” by retweeting a Washington Post tweet with an added expletive to punctuate his feelings. “This is some tinhorn dictator s***,” O’Malley tweeted.