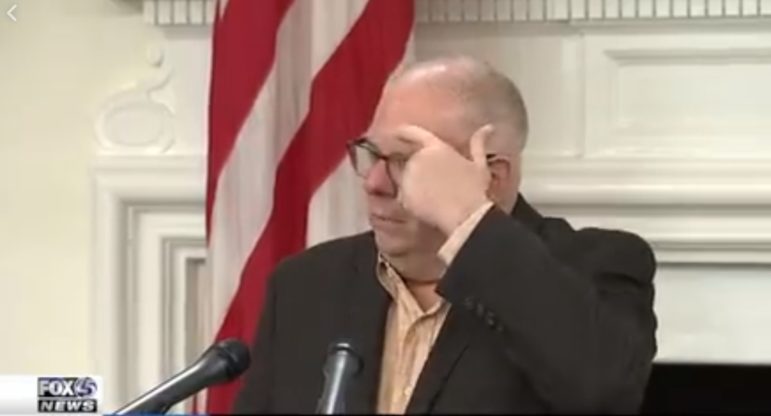 In this video clip from Fox 45 News, Gov. Larry Hogan points to one of the sites where cancerous lesions will be removed Saturday. John Rydell reports the story. https://www.facebook.com/larryhogan/videos/1852287978149292/

HOGAN TO HAVE LESIONS REMOVED: Gov. Larry Hogan has been diagnosed with two forms of treatable skin cancer and will have several lesions removed from his face and body this weekend, Bruce DePuyt of Maryland Matters reports. “It’s basal cell and squamous cell, not melanoma, which is a serious, life-threatening condition,” Hogan, 61, said on Thursday. “It’s basically sun damage, [the result] of many years of not protecting myself with sunscreen.”

SICK LEAVE DELAY APPEARS DEAD: Less than two weeks before a new law allows thousands of part-time workers across Maryland to start accruing paid sick leave, an effort to give confused business owners more time to prepare appears to have hit a dead end, Scott Dance reports in the Sun.

REPUBLICANS OFFER TAX IDEAS: Republicans in the Maryland Senate say the General Assembly can do a lot to help those whose state and local taxes could soar because of the recent federal tax reform. GOP senators presented their ideas Thursday during a news conference highlighting planned legislation to help the 280,000 or so Maryland taxpayers who could end up paying more state taxes as a result of the bill, Tamela Baker reports for the Hagerstown Herald-Mail.

FROSH TO SUE FEDS ON TAX OVERHAUL: Attorney General Brian E. Frosh announced plans Thursday to file a lawsuit challenging the legality of part the new federal tax law that disproportionately hurts high tax states like Maryland, Erin Cox of the Sun reports. Frosh said he intends to join a New York-led lawsuit challenging the new $10,000 cap on deducting state and local taxes, which Frosh said “disrupts the longstanding balance of taxing power between the states and the federal government.”

DEMS SEEK TO REPLACE HANDGUN REVIEW PANEL: Maryland Democrats want to eliminate the state board that hears appeals from people who have been denied gun permits and put such decisions in the hands of administrative law judges, rather than gubernatorial appointees. Democratic legislative leaders say the Handgun Permit Review Board has overturned a greater number of decisions since Gov. Larry Hogan (R) took office three years ago, spurring their effort to change the process.

BANNING BUMP STOCKS: Maryland Democrats want to eliminate “bump stocks” and other accessories that can turn semi-automatic guns into rapid-fire weapons, reports Danielle Gaines for the Frederick News-Post. Lawmakers said they hoped a ban on various rapid-fire trigger activators would gain broad traction in the General Assembly. Such a device was used in the mass shooting at a Las Vegas concert last October that killed 58 people and wounded more than 850.

MAKING DIVORCE EASIER: In a series of briefs on pending legislation in MarylandReporter.com, Capital News Service reports that the Maryland Senate on Thursday passed a bill by a 33-14 vote that would authorize a court to allow divorce on grounds of mutual consent if the parties have minor children. There were also hearings on bills repealing the crime of adultery ($10 fine), making youth marriages illegal and tracking veteran suicides.

CHILD MARRIAGE: Advocates returned to the State House on Thursday to renew their push to change a law allowing individuals as young as 15 to be married in Maryland, but civil and women’s rights groups echoed objections from the 2017 session that a flat-out ban is too restricting, the Daily Record’s Heather Cobun reports.

BILLS ADDRESS BOAT WINTERIZING HAZARD: Two bills connected to the death of 25-year-old Matthew McHale were heard in Senate committees on Thursday, writes Chase Cook in the Annapolis Capital. Sen. Ed Reilly, R-Crofton, has proposed legislation he thinks will help prevent another death like McHale’s, who died while winterizing a boat that had been shrink-wrapped.

FOR EDUCATION LOCK BOX: The editorial board for the Carroll County Times writes that the education funding lock box proposed by Democrats in the General Assembly, which would put gambling funds that were supposed to go to education in an education fund instead of the general fund, would benefit school systems like Carroll County’s, which suffer from the current state funding formula that is weighted heavily toward enrollment, which has been declining in Carroll, and relative wealth, in which the county ranks relatively high.

2 BAY STUDIES, 2 CONCLUSIONS: It was quite a surprise: Two reports on Chesapeake Bay dissolved oxygen levels in 2017 came to starkly different conclusions, reports Karl Blankenship for the Bay Journal. The article appears in MarylandReporter. The Maryland Department of Natural Resources reported improvements and a vastly reduced dead zone. The Virginia Institute of Marine Science found oxygen conditions at their worst since 2014. Scientists at both organizations were caught off guard last fall when the seemingly contradictory findings were released within a few weeks of each other and sent them scrambling to analyze the cause.

**CHICKEN GROWERS IMPLEMENT ENVIRONMENTAL PRACTICES: There’s more to chicken farms than just the poultry. There’s the land that houses these farms. Every year, chicken growers are faced with the decision on how to best maintain their open ground. One way is with vegetative environmental buffers that provide shade, improve water quality and benefit local insects. Read about how these buffers are helping the environment and area farms. SPONSORED CONTENT***

TRONE, MILLER LEAD IN MONEY RACE: Potomac businessman David Trone has a huge cash advantage over the four other Democrats seeking to fill Maryland’s open 6th Congressional District seat, but he is largely self-funding his run for office, according to campaign-finance filings. Among Democrats, Del. Aruna Miller (Montgomery) reported the largest intake from donors during the fourth quarter of 2017, bringing in $300,000 and ending the year with $752,000 in the bank, just shy of the amount of cash Trone had on hand, Josh Hicks of the Post writes.

VAN HOLLEN INTRODUCES ‘CAP AND DIVIDEND:’ U.S. Sen. Chris Van Hollen says that if there was any doubt that this election cycle is a lot different from the one eight years ago, consider this: He has just introduced legislation to confront climate change – a concept he is calling “cap-and-dividend.” This time, Van Hollen says there’s no political risk for Democrats, writes Josh Kurtz in Maryland Matters.

CUMMINGS FILES FOR RE-ELECTION: U.S. Rep. Elijah E. Cummings, the 12-term Democratic congressman who has recently been beset by health problems, filed for re-election on Thursday, John Fritze reports for the Sun. Cummings, the top-ranking Democrat on the House Oversight and Government Reform Committee, has represented the state’s 7th Congressional District since winning a special election in 1996 to succeed fellow Democrat Kweisi Mfume.

CAN MANNING EVEN RUN? Questions about Chelsea Manning’s eligibility to run for U.S. Senate in Maryland could imperil her already steep path to the Democratic nomination against two-term Sen. Ben Cardin. In 2013, Manning was sentenced to 35 years in prison and received a dishonorable discharge from the Army for passing government secrets to WikiLeaks in violation of the Espionage Act. While her case is on appeal, she is on a technical form of unpaid active duty, putting her political campaign at odds with Defense Department regulations that prohibit military personnel from seeking public office, Jenna Portnoy of the Post reports.