FROSH ‘MONITORING’ PEACE CROSS CASE: A cross-shaped monument in Prince George’s County has created anything but peace between Maryland Republican Gov. Larry Hogan and Democrat Brian E. Frosh, writes Ovetta Wiggins in the Post. On Wednesday, Frosh said in a letter to the governor he had not decided whether to file an amicus brief, as directed by Hogan, in the federal court’s ruling that the monument, which sits on public land, is unconstitutional. Instead, he said he would continue to monitor the situation.

DODGING COMPETITIVE BID PROCESS: The agency in charge of Maryland’s juvenile justice system dodged the state’s competitive bidding process by artificially dividing contracts into smaller dollar amounts, according to a state audit released Wednesday. The findings were referred to the state attorney general for investigation, Rachel Baye reports for WYPR-FM.

CRAFT BEER REGS: The limits placed on Maryland’s craft beer industry in the legislation that brought Guinness to the state have created a poor regulatory and statutory environment for a burgeoning sector of the economy, the Daily Record’s Tim Curtis writes about a report from the comptroller’s office. The rules that govern the industry have become a sign of the state’s general attitudes toward business, said Comptroller Peter Franchot.

TRANSPORTATION INNOVATOR: Maryland is not known as a mass transportation innovator. Despite having the longest average commute times in the nation, its transit projects have traditionally produced mediocre performance for their massive costs, opines economist Scott Schaffer in a column for the Sun. But Maryland now has the opportunity to take a leading role in the future of transportation. Suddenly, not just one, but two high speed rail projects have been proposed for our area, each of which has the potential to transform the East Coast by link

ZIRKIN SUES FOR DEFAMATION: State Sen. Bobby Zirkin, chair of the influential Senate Judicial Proceedings Committee, has sued a California-based internet video company for defamation after it included a stock photo of him in a story about an unnamed Baltimore Ravens fan looking at a salacious website on a cellphone during a home game last month, reports Steve Lash in the Daily Record.

FREDERICK SCHOOL CALENDAR: Frederick County’s public schools will be open next year on Yom Kippur and teachers will work on Election Day, according to a school calendar proposal approved Wednesday, writes Allen Etzler in the News Post.The Frederick County Board of Education voted unanimously in favor of the changes in hopes of receiving feedback and data when the changes are up for public comment.

MO CO ED BOARD PAY: Del. Eric Luedtke is advocating for a new approach to increasing the Montgomery County school board’s pay. Bethany Rodgers of Bethesda Beat reports that the former Montgomery County Public Schools teacher is planning to introduce a bill that would create a compensation commission to study the board members’ pay every four years.

IMMIGRANT FACES PART 3: In Part 3 of the CNS series on the immigrants in Maryland, Talia Richmond writes that Indian Americans are feeling the pull to get into politics, especially in Montgomery County. The story appears in MarylandReporter.

BLUE WAVE & HOGAN: Heading into an election pitting them against a governor with sky-high popularity numbers, state Democrats found hope in the blue wave that swept through Virginia, New Jersey and two Maryland cities this week, writes Michael Dresser for the Sun. The comfortable victories scored in gubernatorial elections Tuesday by Ralph Northam in Virginia and Phil Murphy in New Jersey, combined with the crushing defeats Democrats inflicted on Republican incumbent mayors in Annapolis and Frederick, brought an adrenaline rush to a party that was stunned by its loss of the governor’s mansion to Republican Larry Hogan in 2014.

VIGNARAJAH’s ED PLATFORM: Democratic gubernatorial candidate Krish Vignarajah was to unveil her platform on education issues Wednesday in Woodlawn, including free tuition at community colleges, Michael Dresser of the Sun reports. Vignarajah, one of the five first-time candidates in the eight-candidate Democratic field, bills her program as one that will “expand opportunity for Marylanders from Cradle to Career.”

DEL. ANGEL TO RUN FOR SEN. CURRIE’s SEAT: Freshman Del. Angela Angel plans to challenge four-term former Del. Melony Griffith in the Democratic primary for the Prince George’s County Senate seat held by retiring Sen. Ulysses Currie. Angel, a lawyer who has worked on legislative policy, says her record as a first-term delegate and her ability to get things done make her the better choice, Mark Rose reports for MarylandReporter.

BRAVEBOY TO RUN FOR PG STATE’s ATTY: Former Prince George’s County state Del. Aisha N. Braveboy on Thursday will launch her campaign to become the suburb’s next top prosecutor, writes Arelis R. Hernandez in the Post, setting off a head-to-head contest with another longtime elected official in the June 2018 Democratic primary. 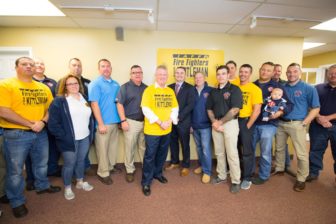 The Howard County Firefighters union endorsed the re-election of County Executive Allan Kittleman, the first time the union has endorsed a Republican for county executive.

FIREFIGHTERS ENDORSE KITTLEMAN: The Howard County Professional Fire Fighters Association on Wednesday endorsed the re-election of County Executive Allan Kittleman, the first time the union has endorsed a Republican candidate for county executive. Union President Richard Ruehl said “Allan has proven himself to be an honest and independent leader …. Since taking office in 2014, our union has developed an incredibly positive working relationship with him. I can personally attest that with Allan, there is no politics.” MarylandReporter.com

UNDECLARED INCOME IN BA CO SCHOOLS: For four years, interim Baltimore County school superintendent Verletta White worked as a consultant for a company that promotes education technology firms without disclosing the payments to the school system or the public, Liz Bowie and Doug Donovan of the Sun report. White repeatedly filed required county disclosure forms stating she earned no outside income while working as the school system’s chief academic officer, the position she held from 2013 until she was named interim superintendent this year. Her predecessor as superintendent, Dallas Dance, also failed to disclose income the same company says it paid him in 2014 and 2015, county records show.

BUCKLEY HEADS TO AUSTRALIA: Annapolis Mayor-elect Gavin Buckley looked forward to a day of respite after the general election, writes Danielle Ohl in the Capital, but the joy following his landslide victory Tuesday over incumbent Mayor Mike Pantelides was short-lived. Buckley will board a plane Thursday and make a 36-hour trip to Australia to mourn the death of his uncle, John Butler.