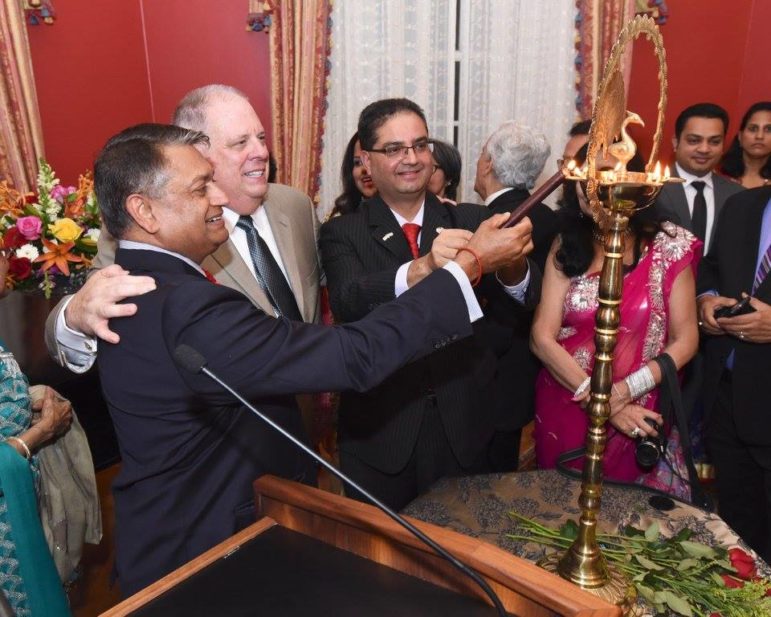 With former chief of staff Sam Malhotra and other members of the Indian American community, Gov. Larry Hogan lights a lamp to celebrate Hindu festival of Diwali. Governor’s Office photo

HOGAN SIGNS PRO-ISRAEL ORDER: Gov. Larry Hogan signed an executive order Monday that requires all firms with state contracts to promise they will not boycott Israel, Erin Cox of the Sun reports. Hogan, surrounded by local and national Jewish leaders, said he wants to send a message that Maryland supports the Jewish state and the economic ties between the two regions.

MARYLAND DREAMS OF TRANSIT TECHNOLOGY: In an analysis for Baltimore Brew, Alon Levy, who has covered public transit issues, writes about Gov. Larry Hogan’s enchantment with maglev and Hyperloop technology, writing that the maglev proposal won Hogan’s earlier support after he rode a test track in Japan. Now it’s the subject of a federally funded $27.8 million environmental review. But under scrutiny, do either of these proposals hold up as the right choice for Maryland’s and Baltimore’s transportation needs? Spoiler alert: The answer is no.

PUT SEMANTICS ON ICE: The editorial board of the Sun opines that Gov. Larry Hogan’s administration is playing some semantic games in its responses to questions about whether it honors Trump administration requests to hold suspected illegal immigrants in the Baltimore Central Booking and Intake Center beyond the time they would ordinarily be released. The effort to cloud the issue is apparently so successful that not even the Trump administration seems to know whether state officials are assisting or obstructing in its damaging immigration crackdown

MINIMIZING INSURANCE PAIN: Decisions made by the Maryland’s insurers and regulators could prevent most consumers from being significantly affected by President Donald Trump’s decision to stop paying cost-sharing reduction subsidies to insurance companies, Tim Curtis of the Daily Record reports. CareFirst and Kaiser Permanente have filed amended rate requests with the Maryland Insurance Administration to help recoup some of those damages. But they are doing so in a way they say will affect the fewest consumers.

TEACHER RETENTION: Excellent school teachers are made, not born. That’s the lesson of several recent studies examining the degree to which classroom experience improves teacher quality, opines Rob Johnson of Prince George’s public schools in an op-ed in the Sun. It’s a particularly important lesson in Maryland right now, where teacher attrition is a well-documented problem. In each of the last five school years, Maryland public school teachers have left the school system at an annual rate of 5.5% to 7% each year, with the largest number of departures coming from the category of teachers with less than 5 years of experience.

FROSH SEEKS TO QUASH PROBE: Stephen Dinan of the Washington Times reports that Attorney General Brian Frosh asked the state’s highest court Monday to step in and derail an investigation into Hillary Clinton’s personal lawyers over accusations of destruction of evidence that could eventually lead to them being disbarred. Frosh, a supporter of Clinton in the presidential race, said the real problem is that a crusading lawyer has been allowed to push the case despite having no personal knowledge of the Clinton lawyers’ behavior, and a judge who ordered the investigation into the Clinton team to take place. 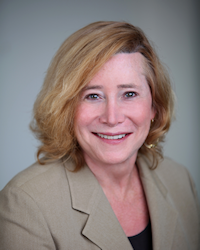 BEYER TO RUN AGAIN FOR SENATE: Political activist Dana Beyer — who challenged District 18 state Sen. Richard Madaleno in the Democratic primary four years ago — confirmed Monday that she has decided to again seek the seat. Madaleno is running for his party’s 2018 gubernatorial nomination instead of seeking re-election. This time, Beyer will face Del. Jeff Waldstreicher, who disclosed plans to run for the Senate seat in July days after Madaleno announced for governor, writes Louis Peck in Bethesda Beat.

EDWARDS HAS NO REGRETS: Former U.S. Rep. Donna Edwards, who is now running for Prince George’s County executive, says she has no regrets about the unusually blunt remarks she delivered following her defeat in last year’s Democratic Senate primary, remarks that had some wondering whether her frustrations with her party had reached a crisis point, Bruce DePuyt writes in Maryland Matters.

REPUBLICAN GETS MO CO MATCHING FUNDS: Montgomery County Council District 2 candidate Ed Amatetti is the first Republican among seven approved candidates to earn matching public campaign funds in the 2018 Montgomery County elections, Glynis Kazanjian reports for MarylandReporter. Amatetti will receive $37,190 in matching funds this week from the State Board of Elections, after getting 173 contributions, averaging $65 per donation.

FOR CARROLL FIRE COVERAGE: The editorial board of the Carroll County Times praises the Carroll County Commissioners’ action to gain more control over the county’s fire services, writing it is the first, albeit very important, step in what is likely to be a lengthy process to secure adequate fire coverage for Carroll County residents for many years into the future. If made into law, the enabling legislation would give the county commissioners the ability to create an authoritative body to regulate fire service throughout Carroll. Right now, the 14 volunteer fire companies around the county operate as independent nonprofits, which is both a blessing and a curse.