BIAS INCIDENTS SURGE: Reports of hate and bias incidents in Maryland surged 40% last year, the Maryland State Police reported Friday. Law enforcement agencies received 285 such reports in 2016, up from 203 in 2015. Catherine Rentz of the Sun reports. There were more than 50 reports in November, the month of the presidential election. That was far more than in any other month. At least 11 alleged incidents included a reference to Donald Trump, police reports show.

JOBLESS RATE DOWN: Maryland added 2,400 jobs in September as the unemployment rate ticked down to 3.8%, the U.S. Labor Department said Friday. The Sun’s Lorraine Mirabella writes that the state’s jobless rate remained below the national average of 4.2%, according to the Bureau of Labor statistics. Maryland was one of 11 states where the jobless rate fell, the labor department said.

FEDS PUSH ON HOLDING IMMIGRANT INMATES: Federal immigration agents have asked the state-run Baltimore Central Booking and Intake Center to hold dozens of immigrants in custody, despite assertions by local officials that they received no such requests, documents reviewed by the Baltimore Sun show. John Fritze of the Sun reports that the documents shed new light on how the federal government and Maryland are approaching illegal immigration as the Trump administration takes a hard line against “sanctuary” policies. Their existence also highlights the extent to which Gov. Larry Hogan’s administration has been eager to avoid discussing the politically sensitive issue in public.

TRUMP ‘STATE OF EMERGENCY’ LAUDED: Maryland’s public health experts are applauding President Donald Trump’s plan to declare an emergency to confront the nation’s opioid crisis, but warn the impact of the move will depend heavily on the steps his administration takes after the paperwork is signed. John Fritze writes in the Sun that the number of people who died in Maryland from drug- and alcohol-related overdoses surged 66% last year to 2,089. Baltimore saw 694 overdose deaths last year, more than twice its 318 homicides.

TOLL ROAD DILEMMA: Gov. Larry Hogan’s public-private partnership proposal to add toll lanes to three of the most congested highways in the Washington suburbs reaches beyond similar proposals that stalled over the years after being deemed too expensive or disruptive to adjacent communities. The success of Hogan’s plan hinges, in part, on whether the private companies can figure out what state planners haven’t been able to: how to add four cost-effective toll lanes without having to demolish dozens, and potentially hundreds, of homes and businesses, writes Katherine Shaver in the Post.

HYPERLOOP RAISING QUESTIONS: The announcement of a surprise cutting-edge transportation project in Maryland – the Hyperloop – is leaving a growing list of questions in its wake, Bryan Sears of the Daily Record reports. It’s the latest in a number of transportation announcements costing billions of dollars that some say is more about headlines than an actual plan. “It’s fun to say you’re cutting red tape and moving faster than the speed of government but there are lots of questions that need to be answered,” said Brian O’Malley, president and chief executive officer of the Central Maryland Transportation Alliance.

NO FEDERAL FUNDS FOR STATE RAPE KIT TESTING: Catherine Rentz of the Sun reports that, for the third year in a row, Maryland will not take part of a robust federal funding program to process untested rape kits. Maryland has 3,700 untested kits across the state, according to a state audit of police departments last year.

HOGAN BLASTS CROSS RULING: Gov. Larry Hogan called a federal appeals court ruling that a cross-shaped war memorial in Prince George’s County unconstitutional “outrageous” and an “overreach,” and vowed that his administration would fight it, John Fritze for the Sun reports.

CARROLL SEEKS MORE AUTHORITY: The Carroll Board of County Commissioners voted to approve the text of legislation that will be presented in Annapolis that could provide county government the authority to regulate the fire service for the first time, writes Jon Kelvey in the Carroll County Times. The commissioners voted 4-1 on Thursday to approve “enabling legislation” that would grant the county the authority to regulate the fire service and explore the possibility of a combined fire service, one that employs paid career fire fighters alongside volunteers.

PUBLIC FINANCE FUND ALMOST BROKE: Meghan Thompson writes in Maryland Matters that the state’s Fair Campaign Finance Fund has lived a long and tumultuous life since its creation in the 1970s, and members of the legislature, along with Gov. Larry Hogan (R), are looking to restore the fund to its former glory. In 2014, Hogan was the first gubernatorial candidate in Maryland history to be elected using public funds through the FCFF. But following Hogan’s election, with no way to replenish the money that had been spent, the fund is almost barren.

JEALOUS BACKERS CREATE BUZZ: Gubernatorial candidate Ben Jealous, a former NAACP leader making his first run for public office, is raking in endorsements with eight months to go before the June Democratic primary, reports Ovetta Wiggins in the Post. One week ago it was Sen. Cory Booker (D-N.J.). The week before that, a nod from one of the state’s biggest labor groups, the Service Employees International Union. The announcements of support — including from Sen. Bernie Sanders (I-Vt.) in July — have created buzz for Jealous’s populist campaign.

DEM HOPEFULS COURT TEACHERS UNION: One by one over the course of two days, the eight Democrats running for governor climbed a convention center stage here, courting one of the most coveted endorsements in Maryland: the support of the sprawling and powerful teachers union. The candidates offered big promises to increase funding for public schools — sometimes by more than $2 billion per year, Erin Cox of the Sun reports.

PG TEACHERS PROTEST BAKER: Dozens of Prince George’s County teachers walked out in protest when County Executive Rushern Baker III was introduced to address the Maryland State Education Association at its annual convention. Theresa Dudley, president of the Prince George’s County Educators’ Association, said the protest on Friday afternoon was in response to an ongoing wage dispute with county leadership, Ovetta Wiggins of the Post reports. 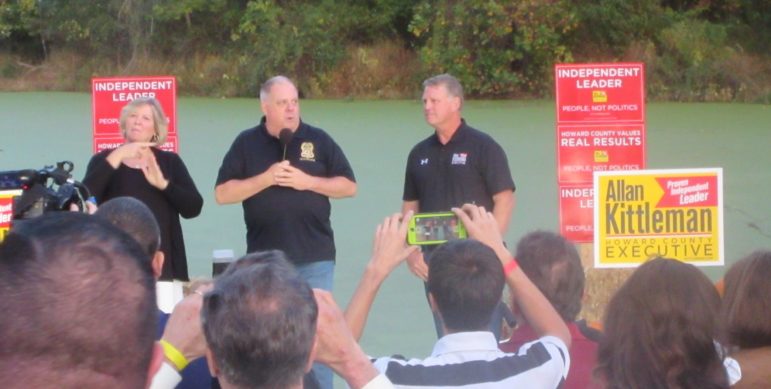 Gov. Larry Hogan speaks at picnic for Howard County Executive Allan Kittleman on the Kittleman family’s West Friendship farm. That’s an algae covered pond behind them, with a sign interpreter at their side. MarylandReporter.com photo.

HOGAN HELPS KITTLEMAN: A record crowd of over 800 people attended the annual October campaign picnic for Howard County Executive Allan Kittleman, boosted by the presence of Gov. Larry Hogan, who praised Kittleman’s performance and urged his re-election next year. As for himself, Hogan said, “I intend to be the second Republican governor in the entire history of the state to be re-elected.” (Theodore McKeldin was the only other Republican governor to win re-election, serving from 1951 to 1959.)

ALEC ROSS ON EDUCATON, ELECTION REFORM: Maryland gubernatorial candidate Alec Ross, who considers himself an education candidate, spoke with blogger Ryan Miner in his A Miner Detail Radio program on Sunday to discuss his education and election reform plans.