HOGAN FALTERS SLIGHTLY, REMAINS POPULAR: Gov. Larry Hogan remains broadly popular, according to a newly released Goucher College poll – even as President Trump’s numbers in Maryland are an upside-down mirror image of the governor’s. And Marylanders dislike the GOP-led Congress even more than they disapprove of Trump. A plurality of Maryland voters believes Hogan, who is seen as a political moderate, represents the future of the Republican Party. But the survey also carries some potential peril for the governor. months ago, writes Josh Kurtz for his Maryland Matters blog.

SECTY PETERS REASSIGNED: Gov. Larry Hogan has moved one of the two Cabinet secretaries who have been serving without a salary because of a turf battle between the governor and the General Assembly into a position where she will be paid. Planning Secretary Wendi Peters, whose pay was cut off July 1 in a dispute over Senate confirmation powers,was reassigned as special secretary for smart growth. Her pay will be $137,750, roughly equivalent to her former salary as secretary, writes Michael Dresser in the Sun.

SMALL BIZ IMPERILED ALONG PURPLE LINE: Katherine Shaver of the Post writes about the small businesses in the Spring Center strip mall that until this summer employed more than 300 people. The mall will be torn down to make way for the Purple Line. Many of the shop owners are immigrants from Ethiopia, El Salvador, Vietnam, Korea and elsewhere and have little financial cushion for the move and to restart.

TREE CUTTING ON PURPLE LINE: Workers could begin slicing down trees along the route of the planned Purple Line as early as today, after a federal judge late Friday denied a request for a temporary restraining order from opponents of the light rail project, Jenna Portnoy of the Post reports. The ruling is the latest disappointment for opponents of the light-rail line who have been waging legal battle since 2014 to block its construction.

DEM LAW AIDS HOGAN: When General Assembly Democrats pushed through a law in 2013 to help build mass transit projects with the help of private companies, none of them envisioned Gov. Larry Hogan’s upset win a year later. Erin Cox and Luke Broadwater of the Sun report that Hogan is now using that law to push a $9 billion plan to add hundreds of miles of toll lanes to three of Maryland’s most congested highways, and the law gives the legislature no meaningful way to intervene. “We can do all of it without their permission,” Hogan said Friday. “They have no real input.”

HOGAN SWEATS BIG STUFF, TOO: In an analysis, the Post writes that Gov. Larry Hogan’s proposals to widen the state’s three most congested highways and fund Metro could undercut Democrats’ strategy of painting him as a small-minded leader with few significant accomplishments when they try to oust him in next year’s election, analysts say. The Republican governor’s reelection prospects already looked strong before his two transportation initiatives this month.

CUTTING TOLLS, RAISING TOLLS: Two years ago and with much fanfare, Gov. Larry Hogan convinced the Maryland Transportation Authority to lower tolls on Maryland’s highways and bridges to reverse the “downward spiral” of tax increases instituted by his predecessor. This week, opines the editorial board for the Sun, Mr. Hogan announced a $9 billion highway widening plan likely to be financed chiefly through tolls so large that they will dwarf anything Maryland motorists have ever had to pay before. And that’s just one of the curiosities of a state transportation proposal that is both enormously ambitious and remarkably vague.

SABOTAGING SCHOOL BOARD: In one of the oddest situations Annapolis has seen in recent times, Gov. Larry Hogan is trying to sabotage his own school board, political pundit Barry Rascovar wrote in his Sept. 17 column. A state school board made up almost exclusively of Hogan appointees was scheduled  to submit to federal officials a plan for turning around under-performing schools. Yet the governor is intent on blowing up his school board’s plan before it arrives in Washington.

ROLL BACK ON UNIVERSITY ASSAULT PROBES: The Trump administration on Friday rolled back federal efforts to influence university investigations into sexual assaults, rescinding Obama-era guidelines that some felt provided too little protection to those accused of rape and other sex crimes on campus. Meanwhile, writes John Fritze of the Sun, six schools in Maryland are among 258 nationwide with pending sexual violence investigations, underscoring the scope of a problem that has flummoxed education leaders and policymakers for years.

PART OF PROBLEM, PART OF SOLUTION: Anne Arundel Health System doctors found wide variation when they looked at how they prescribed opioid painkillers. Patients with the same medical conditions, such as a back injury, were given the potent, addictive drugs in some instances and not in others. Doctors prescribed a wide range of doses; one person might get 15 pills and another 30. Andrea McDaniels of the Sun reports that Anne Arundel Health System joins hospitals across the region and state attempting to eradicate a problem medical institutions now realize they helped create.

REDMER, McDONOUGH ANNOUNCE FOR BA CO EXEC: Republican state insurance commissioner Al Redmer Jr. and Del. Pat McDonough formally announced their candidacies for Baltimore County executive on Saturday. McDonough launched his campaign at the Boulevard Diner, a retro-style diner in Dundalk where President Donald J. Trump visited last September during his campaign. Redmer chose the Boumi Shriner Temple in Rosedale. Standing at his side was Republican Gov. Larry Hogan, who won Baltimore County in 2014 with 59% of the vote. Catherine Rentz of the Sun reports the story, which is topped by a video of the two announcements.

LOBBYIST PLEADS GUILTY: Drew Gerber of the Post reports that a Maryland lobbyist pleaded guilty Friday to bribing a state legislator in a wide-reaching scheme involving expanded liquor licenses in Prince George’s County. Matthew Gorman, a 43-year-old Hyattsville attorney, entered a guilty plea in U.S. District Court in Greenbelt and admitted giving more than $5,000 in bribes to William A. Campos for political favors Campos did as a state and county elected official.

YUMI HOGAN ART THERAPY FOUNDATION: First lady Yumi Hogan has started the Yumi C.A.R.E.S. Foundation, a nonprofit that helps children with cancer by providing them with art therapy. Hogan is an artist who has made art therapy her key issue. She started the program at the University of Maryland children’s hospital, because her husband, Gov. Larry Hogan, was treated for non-Hodgkins lymphoma at the medical system shortly after taking office in 2015, reports Andrea McDaniels for the Sun.

PEROUTKA WON’T STEP DOWN: Michael Peroutka has no plans to resign in response to recent calls that he step down from the Anne Arundel County Council, insists he isn’t a racist and argues that killing black babies at abortion clinics is the true racism in America. In an interview on Thursday, the Republican said he will not step down following multiple calls for his resignation at consecutive council meetings.

EX-SUPERINTENDENT DANCE PROBED: State prosecutors are investigating former Baltimore County school Superintendent Dallas Dance and his relationship with a company that did business with the school system, the Sun is reporting. The Maryland State Prosecutor’s Office launched a criminal investigation more than six months ago, issuing a subpoena for school system records, and this month several people associated with the system were interviewed by investigators, sources said.

NO FAVES IN MO CO EXEC RACE: Andrew Metcalf of Bethesda Beat reports that former Montgomery County Executive Doug Duncan said he doesn’t see a clear favorite in the current race for county executive. Duncan weighed in on the 2018 race in an interview with Bethesda Beat after Del. Bill Frick (D-Bethesda) announced he would run for the position instead of pursuing the 6th District congressional seat.

LEGGETT TO BID FOR AMAZON HQ2: Montgomery County Executive Ike Leggett said last Wednesday the county stacks up well with Amazon’s requirements for a new headquarters, even as Gov. Larry Hogan says Baltimore city has the state’s best potential site. Leggett said the county will take a business-like approach to attracting the company by highlighting the county’s importance in the Washington, D.C., region, its educated workforce and transit connectivity.

BOTCHED BAIL REFORM: Walter Olson in a commentary for the Wall Street Journal and his own blog writes about how Maryland botched bail reform, writing that reformers on the left and right who worry about mass incarceration have argued lately for kicking private bail bonds out of America’s criminal-justice system. 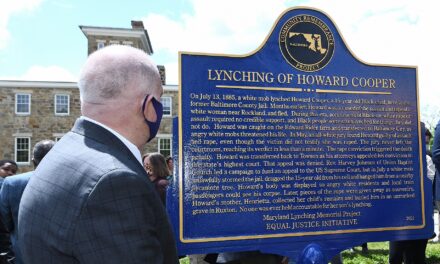