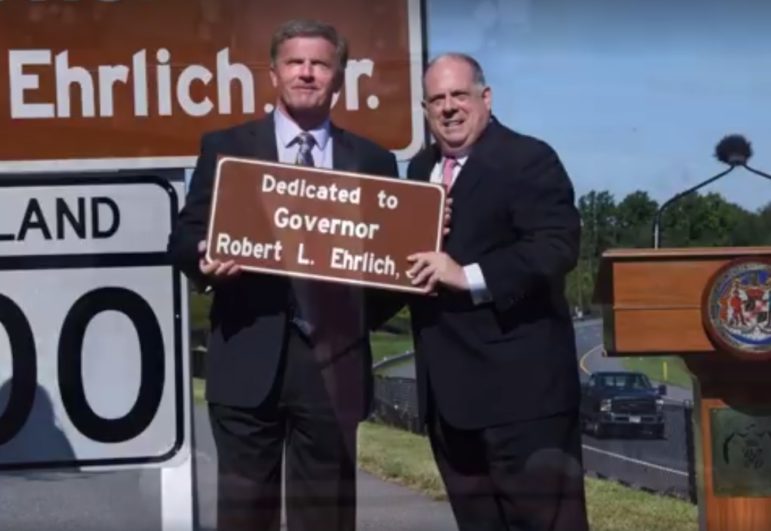 ICC DEDICATED TO EHRLICH: Gov. Larry Hogan announced Thursday that he has dedicated the Intercounty Connector to his friend and onetime boss, former Gov. Bob Ehrlich. The two Republicans celebrated the dedication in Rockville beside the toll road, which Ehrlich fought to build during his term a decade ago. Hogan served in Ehrlich’s Cabinet, Erin Cox writes in the Sun.

HOGAN CRITICAL OF CONGRESS ON IMMIGRATION REFORM: Gov. Larry Hogan on Thursday offered a general critique of Congress’ failure to reform U.S. immigration policy, saying federal lawmakers have been “kicking the can down the road on immigration and never taking action.” Erin Cox reports in the Sun that the remarks stand in contrast to Hogan’s frequent position that he does not comment on federal matters because he is focused on Maryland.

OPPOSING DACA REPEAL: In East Baltimore, where news of President Trump’s cancellation of the DACA program hit the Latino community hard, about 200 people gathered in a church basement to discuss how to oppose it, writes Louis Krauss for Baltimore Brew. Mayor Catherine Pugh showed up to voice her support for “the dreamers,” as DACA recipients are sometimes called.

PA LAGS ON BAY CLEANUP: Donna Morelli of the Bay Journal writes that with Pennsylvania lagging badly in helping to clean up the Chesapeake Bay, a new report highlights the role that intensive livestock farming plays in the state’s shortcoming. Four south-central Pennsylvania counties where animal manure is heavily used to fertilize crops “contribute disproportionately” to the nitrogen and phosphorus pollution fouling local waterways and the Chesapeake Bay, according to the report by the Environmental Integrity Project. The article appears in MarylandReporter.

HEALTH EXCHANGE’s FUTURE: Last month, the Maryland Insurance Administration approved significantly higher premiums for the 2018 individual health exchange and President Donald Trump slashed the marketing budgets for state exchanges and money to the navigators that help consumers find insurance plans. Add to that fewer insurers on the market and a 45-day enrollment period — half of what it has been in the past — and there is a sense that the 2018 enrollment period could be tumultuous. But Dr. Howard Haft, acting executive director of the Maryland Health Benefit Exchange, said the exchange will be ready for business Nov. 1 and expects to have a good enrollment period, reports Tim Curtis for the Daily Record.

BEER SALES IN GROCERY STORES: WHY NOT? The editorial board of the Sun wades into the heady subject of beer sales in grocery stores, writing that Comptroller Peter Franchot’s task force on Maryland beer laws met this week on whether beer sales should be allowed in grocery stores, and the discussion was dominated by opponents of the idea. The theory is that if grocers put mom-and-pop stores out of business, there will be fewer places overall for small brewers to sell their products, and big grocery chains will be more inclined to sell macro-brews that they can buy in bulk.

FAIR TOUTS HIGHER ATTENDANCE: Maryland State Fair officials attributed a 20% boost in attendance at this year’s event to the switch to starting schools after Labor Day, Carrie Wells writes in the Sun. The fair had 555,841 guests and exhibitors over the 12 days of the event, the third-best attendance on record. The most guests attended in 1990, with 618,998, and the second-most in 2015, with 561,426.

‘OPEN FOR BUSINESS:’ When Maryland Gov. Larry Hogan took office in January 2015, his catch phrase became “We’re open for business.” It soon made its way to road signs that welcome drivers into the state. Now it’s the backbone of a new statewide marketing campaign that aims to present Maryland as an innovation hub and attractive home for businesses, writes Sara Gilgore for the Washington Business Journal.

DEL. WASHINGTON TO CHALLENGE SEN. CONWAY: Del. Mary Washington will challenge Baltimore Sen. Joan Carter Conway for the Democratic nomination next year, putting yet another senior city lawmaker’s seat in play. Washington, 55, said Thursday she filed this week to run in the June 26, 2018, primary for the 43rd District Senate seat. The two-term delegate will try to oust the only Baltimore senator who chairs a standing committee, Michael Dresser of the Sun reports.

NEW U.S. SURGEON GENERAL HAS MD BACKGROUND: Andrea Mitchell of the Sun writes that Dr. Jerome Adams’ rise to the office of U.S. surgeon general began in a rural town in Southern Maryland where even in high school he stood out among his peers as he racked up accolades and awards for science, math, technology and engineering.

POLITICAL NOTES: Danielle Gaines Political Notes column in the Frederick News-Post includes these two items: The roads are closing and Marine One will soon be overhead. President Donald Trump is heading back to Camp David today; and former Sen. Barbara Mikulski will take center stage at Baltimore’s aptly named Senator Theater for an Emerge Maryland fundraiser in October.

4 SHORE AIRPORTS GET FED FUNDING: Four Eastern Shore airports will get almost $700,000 in federal funding for repairs and improvements to runways, Sens. Ben Cardin and Chris Van Hollen have announced. Most of the funds will go to Crisfield-Somerset County Airport, the Salisbury Daily Times reports.

NON-CITIZENS VOTE DIVIDES COUNCIL: The College Park City Council is divided on whether questions about non-U.S. citizens voting in municipal elections in the future should go to referendum on the Nov. 7 ballot, Leah Brennan reports in the Diamondback. A possible amendment to the city’s charter was introduced on June 13 that would eliminate U.S. citizenship as a voter registration requirement. The council could decide to vote to put the issue to an advisory referendum, which is non-binding, in some form at its Sept. 12 regular meeting.