SLIGHT GAIN IN PARCC TESTS: Three years after Maryland began to hold public school students to higher standards, results of English and math assessments released Tuesday show students have made only slight progress and less than half statewide passed the tests, Liz Bowie and Tim Prudente report for the Sun.

SMART GROWTH IS STILL SMART: The editorial board for the Sun opines that Gov. Larry Hogan got a pretty warm reception when he announced that “Plan Maryland” was off the books and that “we will finally put local planning authority back into the hands of local governments — where it belongs.” With Plan Maryland, Gov. Martin O’Malley simply put enforcement teeth into the Smart Growth plan proposed by Gov. Parris Glendening and approved by the legislature 20 years ago. If Gov. Hogan has a better approach, one that keeps local government happier, so much the better.

ON MOVING STATUES: Sun columnist Dan Rodricks addresses those who would criticize Gov. Larry Hogan’s decision to remove the Roger Taney statue from the State House, that some say that instead of bowing to political correctness, Hogan should have insisted that the state permanently honor the chief justice who wrote the worst Supreme Court decision of all time. 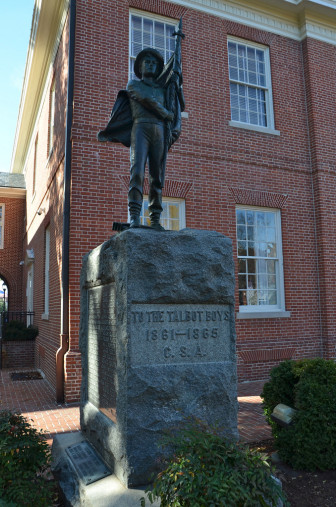 The Talbot Boys statue at the Easton courthouse. MarylandReporter.com photo

WHO WAS TANEY? Rachel Baye of WYPR-FM speaks with several historians on Roger Taney and his life in the public eye. Said one, “Taney’s reputation kind of goes up and down throughout history, and … he was seen as a sort of political hack who had been put on the court basically to try to carry out (President Andrew) Jackson’s will.”

REMOVAL OF TALBOT BOYS CALLED FOR: First District Democratic congressional candidate Mike Pullen assembled with a group of protesters on the Talbot County Courthouse lawn Thursday evening, Aug. 17, to call for the immediate removal of the Confederate Talbot Boys statue, writes Josh Bollinger for the Easton Star Democrat. Talbot County Council President Jennifer Williams said the council should not rush to a conclusion over an issue this serious.

AN UNCONVENTIONAL CANDIDATE: Len Lazarick of MarylandReporter profiles a very unconventional candidate for comptroller, Anjali Reed Phukan. She said she wants to be an “environmental Republican” like Gov. Larry Hogan. She developed a taste for politics growing up in Montgomery County, working in several Democratic campaigns. She also developed a taste for drugs, which got her “kicked out a number of times from Montgomery County schools. I’m in recovery.”

WATSON TO RUN FOR DELEGATE: Former Howard County Councilwoman Courtney Watson was expected to announce yesterday plans to run for the Maryland House of Delegates District 9B seat. The seat primarily represents Ellicott City, as well as some of Elkridge. It’s currently held by Republican Robert Flanagan, who has been in office since 2015, Kate Magill of the Howard County Times reports.

FICKER SENDS OUT CAMPAIGN EMAIL: Ryan Miner of A Miner Detail blog writes that the only Republican running for Montgomery County executive, Robin Ficker, sent his first campaign email blast today to people who never signed up to receive his updates. In April, Bethesda Beat reporter Andrew Metcalf reported that Ficker sent a public information request to Montgomery County officials requesting email addresses “used by the county to distribute its Paperless Airplane newsletter as well as the lists maintained by council members.”

13 BA CO SCHOOL WITHOUT A/C: WMAR-TV is reporting that Baltimore County schools Operations Chief Kevin Smith says that when students return, only 13 schools will be without air conditioning. That’s down from 37 at the start of last year, when the first five days of school were canceled because of the heat. “The remaining 22 schools that we had on that list to get us down from 90 to 13 schools have been completed and will be ready to go for the start of the school year,” Smith said.

PG EVACUATES CONDOS: About 100 people were ordered out of two squalid Temple Hills condominium buildings Tuesday, but a group of defiant residents said they are not leaving because they have nowhere to go, report Arelis R. Hernández and Rachel Siegel in the Post. “We want to avoid an Oakland or London situation,” said Thomas Himler, a top aide to Prince George’s County Executive Rushern Baker, referring to two recent deadly fires at decrepit buildings in those cities. “This is a life and safety issue.”