The statues of Confederate generals Robert E. Lee and Stonewall Jackson were removed from Wyman Park in Baltimore early Wednesday morning, along with other Confederate memorials in the city. Screen shot from WMAR TV.

CITY REMOVES REBEL STATUES: Confederate statues in Baltimore were removed from their concrete bases overnight, as crews using heavy machinery loaded them onto flat bed trucks and hauled them away, Sean Walsh of the Sun reports. 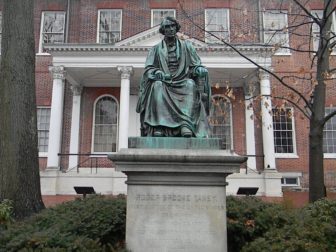 HOGAN CALLS FOR TANEY STATUE TAKE-DOWN: Gov. Larry Hogan joined a groundswell of opposition to Confederate-linked monuments on Tuesday, calling for the removal of a statue of the Supreme Court chief justice who wrote an 1857 decision that upheld slavery and denied citizenship to black Americans, Pamela Wood reports for the Sun.

BUDGET GURU DESCHENAUX TO RETIRE: Warren Deschenaux, the executive director of the Department of Legislative Services, who has been an integral part of the budget-making and policy-writing process in Annapolis for decades, announced Tuesday that he plans to retire on Dec. 1, Josh Kurtz of Maryland Matters reports.

JUDGE COULD HOLD STATE IN CONTEMPT: Maryland’s top health official spent more than 90 minutes in court Tuesday morning defending the pace at which the state is moving mentally ill criminal defendants out of jail and into treatment, Pamela Wood of the Sun reports. A Baltimore judge is weighing whether to hold the state in contempt for failing to follow court orders to immediately move those individuals into treatment.

POLITICS AND POLICY AT MACO: Thousands of local government officials will descend on Ocean City for an annual meeting of the Maryland Association of Counties to talk policy, but it’s the politics that will have a lot of tongues wagging, writes Bryan Sears for the Daily Record.

GOP BACKS NEW FBI HQ: Bruce DePuyt of Maryland Matters writes that despite the General Service Administration’s recent decision to pull the plug on the search for a new FBI headquarters site, Republican leaders in Congress know that the bureau must have a new home, Rep. Steny Hoyer (D-Md.) said this week. And he thinks the government should treat the sale of the FBI’s current headquarters site, on Pennsylvania Avenue NW, and the construction of the new building as separate transactions.

A TRULY ESSENTIAL MAN: Adam Pagnucco of Seventh State writes about Steve Farber, one of the competent, honest and experienced Montgomery County public servants who are almost totally unknown to the public. More than the politicians who think that government would collapse without them, Farber and others are the essential men and women who keep the trains of government running on time. Farber, however, is retiring.

BARTLETT ENDORSED IN DELEGATE RACE: Bobby Bartlett, a Democrat seeking a District 39 seat in the House of Delegates, has been endorsed by “Run for Something,” an attempt to support the electoral ambitions of progressives, all under the age of 35. He is one of 65 candidates in 18 states, according to an email from the organization, writes Doug Tallman of MyMCMedia.com.

TOP COP QUESTIONS DOJ ON AID: Baltimore Police Commissioner Kevin Davis told a top U.S. Department of Justice official this week his suggestion that federal crime-fighting assistance for the city is contingent on local policies for immigrant detainees was “perplexing,” given the city does not control its jail, writes Kevin Rector in the Sun. 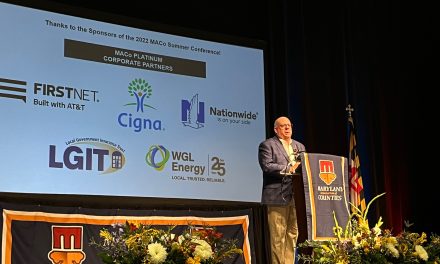