A 2013 demonstration for better wages and working conditions outside the Wheaton McDonald's. McDonald's was one Montgomery County business included in a minimum wage impact study this year. Photo by Stephen Melkisethian on Flckr Creative Commons.

Taxpayers are paying for a lengthy study that concluded a proposed $15 minimum wage in Montgomery County would lead to fewer jobs, but which businesses participated in the study isn’t being made public.

“We don’t have a list of businesses surveyed,” said County Executive Ike Leggett spokesman Patrick Lacefield. “The businesses were assured anonymity in order to ensure we got accurate and honest information from them.”

Lacefield said participants expressed concern early on about potential negative repercussions to business owners if survey responses were made public. A $15 minimum wage proposal is expected to go before a council committee this fall, after a successful push was vetoed by Leggett in January.

Business owners reported negative changes if the bill passes, including a family-run restaurant who may no longer be able to hire high school students in the summer and a franchisee who will stop hiring disabled adults and college interns.  A fast-food restaurant franchisee reported already cutting table cleaning staff from eight to 12 employees per shift in 2014 to two or three in 2016, in response to already imposed recent minimum wage increases.

Leggett, a Democrat, commissioned the study for $149,600 after his January veto of the legislation from the Montgomery County Council that would have raised the county’s minimum wage to $15 for most businesses by 2020. Businesses have urged council members to wait for the study results.

Electronic surveys, focus groups and in-person interviews were conducted over a two-month period in April and May, and a hearing is scheduled for next month to address questions on the study.

Proponents of the $15 minimum wage legislation are up in arms over the results of the survey, which shows that 65% of businesses in Montgomery don’t support the legislation.

County Councilmember George Leventhal, who is term limited and running for county executive, and At-Large Councilmember Hans Riemer, who is seeking re-election, are questioning the authenticity of the survey findings.

“I’ve always said you can find a consultant and commission him or her and get the results you want on the issue of the minimum wage because there is not consensus among economists,” Leventhal said. “It appears to me Mr. Leggett got the study that he wanted.”

Restaurants, retail stores, landscaping companies, home health care and professional service businesses represented some of the larger industries in the study.  All classes of business were included in the focus groups and the surveys, Lacefield said.

He cited Dunkin Donuts, McDonald’s and Supercuts as some examples of those surveyed, but even the county doesn’t possess the full list of businesses that participated in the study, Lacefield said. 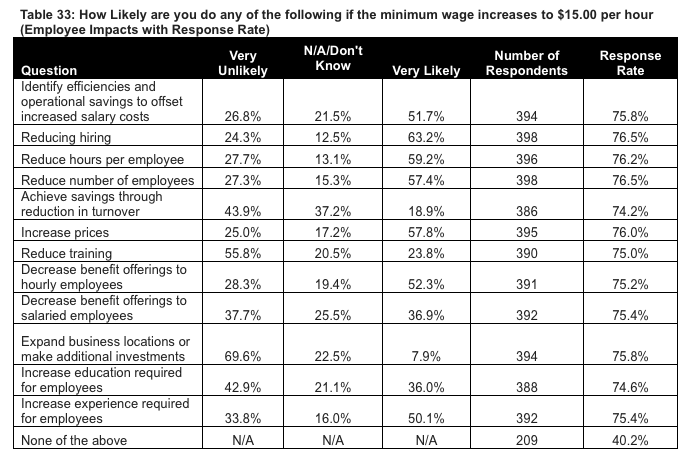 Majority of businesses say they would lay off, reduce hiring, cut hours

“We brought hard figures with us to the meeting,” Richardson said. “We are going to have to raise prices for families that use our child care services. Our margins are not that we can take a hit to pay for the $15 increase.”

But Richardson said, that many of his employees live in Frederick County so Montgomery families would really be taking the hit.

Sources for the economic impact study included the Bureau of Labor Statistics, the Census Bureau, the Maryland Department of Labor, Licensing and Regulation, the Center on Wage and Employment Dynamics and the National Employment and Law Project.

Surveyed employers, overall, agreed that increasing the minimum wage would be a benefit to society that would contribute to healthier and happier families.  Another study showed that increasing the minimum wage nationally to $15 an hour would end hunger for 1.2 million households. Single parents, non-white households and parents with only a high school degree would benefit the most. 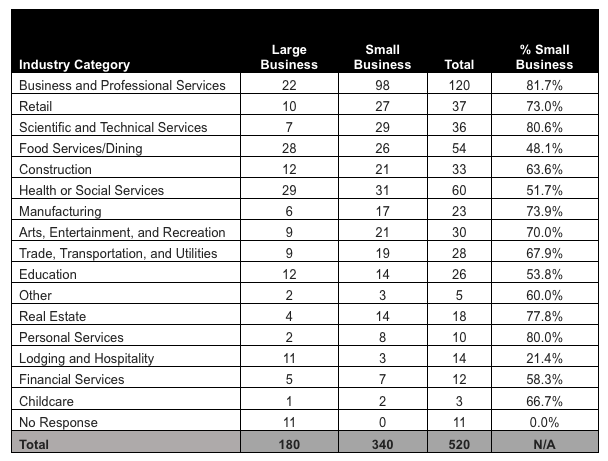 A chart giving information on the businesses who answered a survey for the county’s impact study on the minimum wage. Chart courtesy of PFM.

Councilmember Hans Riemer, a Democrat who voted for the bill in January, said it is impossible to predict the outcome of a rise in the minimum wage.

“I opposed conducting this study from the beginning because I never believed it was possible to do a study that could credibly predict the impact of the minimum wage in the future,” Riemer said.

“The many methodological concerns being raised with this study underscore that point. Of course it is critical to be prudent in setting the minimum wage and analyze the impacts as we go. I proposed an amendment which was included in the last bill that required an annual report on the labor market so that the council could see the results in real time and make adjustments as needed.”

“The study essentially concludes that raising the minimum wage in Montgomery County—even a small amount—would be the most devastating economic shock the county has experienced in a generation, more damaging than the Great Recession,” Cooper states. “To say that the study has methodological problems would be a gross understatement . . . how they calculate expected impacts on employment is completely divorced from any actual research.”

PFM is scheduled to appear before the Council in September to review their findings and answer any concerns about the study.  A public hearing is scheduled for Sept. 26. The legislation could be voted on this fall.

Commentary: Medicare a model of efficiency compared to Obamacare