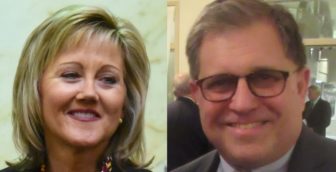 ACTING SECTYs SUE KOPP: Two of Gov. Larry Hogan’s Cabinet secretaries filed a lawsuit against the Maryland treasurer Thursday demanding pay for their work, Erin Cox reports for the Sun. Their action sends a feud between the Republican governor and leading Democrats into the court system, escalating a fight over constitutional limits on Hogan’s power to make recess appointments.

RX POT CONFLICT PROBE: Maryland medical marijuana regulators are asking companies that have received preliminary licenses to grow and process the drug whether they had personal or business connections to the independent experts who graded their applications, Fenit Nirappil of the Post reports. The inquiry follows a report in The Washington Post this week that revealed several ties between evaluators and businesses.

WHAT’s MADE DELANEY RUN FOR PRESIDENT? Tamela Baker of the Hagerstown Herald-Mail interview U.S. Rep. John Delaney about his decision to run for president. Many in Maryland believed the Maryland Democrat would take on popular Republican Gov. Larry Hogan next year. So what changed? “I believe the work for me to do is on the national level,” Delaney told Herald-Mail Media in an interview Tuesday. Partisan politics have stymied progress in Congress, as leaders spend too much time re-litigating past actions and “not talking about the future,” he said.

CRIME FIGHTING IN BALTIMORE: U.S. Attorney General Jeff Sessions told Baltimore officials Thursday that if the city wants to participate in a new federal crime-fighting program, they must cooperate with Trump administration immigration enforcement efforts that the state attorney general says could be unconstitutional, at a jail they do not control, reports Pamela Wood of the Sun.

JUDGE: MO CO OVERREACHED ON PESTICIDE BAN: A Montgomery Circuit Court judge on Thursday overturned the county’s ban on the use of cosmetic pesticides on lawns, dealing a major setback to environmental advocates who argued that chemicals in the products are unsafe. Rachel Chason of the Post reports that the judge said the law would conflict with federal and Maryland state regulations that allow the use of the pesticides and is just one example of Maryland counties’ “insatiable appetite to tamper with existing state laws.”

STRONG FIELD FOR CD-6: It’s easy to try to pigeonhole and stereotype the Democratic candidates now running for the 6th District congressional seat, writes Josh Kurtz for a commentary for Maryland Matters. But what we really have here is an incredibly strong field of talented, appealing candidates. And no one starts with a solid and unshakable base of voters.

DEL. KRAMER TO RUN FOR SENATE: Del. Ben Kramer, who for months considered a run for Montgomery County executive, said late Thursday that he will seek the District 19 state Senate seat instead. Kramer announced his decision a day after Sen. Roger Manno, who holds the seat now, said he will run for Congress, Louis Peck of Bethesda Beat reports. In this article, Del. Bonnie Cullison, who was eyeing the Senate seat in the earlier article below, said she is endorsing Kramer.

DEL. MORALES TO SEEK RE-ELECTION: Del. Marice Morales, elected for the first time four years ago, said this week that she is committed to seeking re-election to her current post. Louis Peck writes in Bethesda Beat.

ATLANTIC GAS EXPLORATION WORRIES SCIENTISTS: Scientists are worried that an executive order issued by President Trump earlier this year that seeks to open large portions of the mid-Atlantic and other coastal areas to oil and gas exploration would harm the endangered North Atlantic right whale and other species that occasionally visit the Chesapeake Bay,William Funk of the Bay Journal writes in a story published in MarylandReporter.

VAN HOLLEN TOUTS CANCER DRUG BILL: The U.S. Senate gave final approval Thursday to a measure backed by Sen. Chris Van Hollen that would speed approval of cancer drugs for children. The bipartisan measure, approved by the House in July, was attached to legislation that will allow the Silver Spring-based Food and Drug Administration to continue to collect fees from pharmaceutical companies to pay for drug reviews.

POLITICAL GRANDSTANDING: The editorial board of the Carroll County Times takes former County Commissioner Robin Bartlett Frazier to task for taking her open meetings complaint against the Taneytown City Council to court rather than to the Open Meetings Compliance Board. “The two-day trial itself was a bit of a sideshow, with Robin Frazier representing herself — often having to be reminded of civil procedure and the law during trial — then proceeding to take the stand and asking herself questions as a witness. It seemed to be political grandstanding at its finest,” the editorial board writes.

SEAFOOD WORKER ABUSES CLAIMED: Last month, representatives of the United Food and Commercial Workers union were in Ocean City, handing out informational pamphlets at a Phillips Seafood restaurant. Phillips operates a crabmeat processing plant in the city of Lampung, Indonesia, that relies mostly on low-paid female workers organized by the Lampung Foodworkers Federation to shell crabs by hand and prepare the food for shipment to the United States. Over the last four years, organizers say, the company has resisted labor law reforms being introduced by the government, and has recently stepped up efforts to further cut labor costs with so-called “mini-plants” designed to exploit rural workers. Bruce Vail writes the story for In These Times.