Antique Jett and Christopher Roary, both of whom are enrolled in the Civic Works stormwater program, assess a North Baltimore drainage project. By Journal photo by Rona Kobell

Two months ago, Sean Williams and Antique Jett would have driven by the field next to a parking lot in Baltimore without a second thought to the gray structure resembling an infield parking pad, or the grate next to it.

But today, they identify instantly what’s wrong. This raised slab, covered in wire mesh and gravel, is supposed to slow down and filter rain runoff before it reaches the drain. But it’s choked by weeds, Jett said. There’s a hole around the drain, Williams added. They jotted notes on a clipboard. The library parking lot at Notre Dame of Maryland University does not have the worst stormwater pollution controls, they agreed, but they could use improvement.

Williams and Jett are among the 10 Baltimore City residents undergoing a stormwater training program through Civic Works, a Baltimore nonprofit, and the Center for Watershed Protection, based in Ellicott City. The program is one of several new initiatives in the city, which seeks to unite a willing yet underemployed workforce with a growing and insatiable need to maintain runoff control structures so Maryland can meet its Chesapeake Bay cleanup goals.

‘Didn’t even know what stormwater was’

“Before I got here, I didn’t even know what stormwater was. Now, I can see myself staying in it for a long time,” said Jett, 31, who previously worked on commission detailing cars and wanted better prospects to support his newborn daughter and two stepchildren. “Here, we’re taking care of what we can take care of to make a better environment. And if we don’t do it, it’s just going to go to the Chesapeake Bay and mess it up, more than it is already.”

All six Bay states and the District of Columbia have committed to taking the steps needed by 2025 to make sufficient reductions in nitrogen, phosphorus and sediment flowing into the Bay. The cost of Maryland’s cleanup will be $14.45 billion, according to the University of Maryland Environmental Finance Center.

Stormwater — rainwater that hits the streets and concrete and picks up heavy metals, as well as nitrogen and phosphorus before it winds up in local streams and then the Chesapeake — accounts for a little more than half of the cost. That ought to support a lot of jobs, said Dan Nees, the center’s director.

“It’s no coincidence that the places that have had the most struggles getting their economies going are the ones that are investing in this,” Nees said. “There’s a perception that a lot of these jobs are entry level, and a lot of them are, but not all of them. This is a huge opportunity.”

Maryland hasn’t always seen stormwater that way. In 2013, the General Assembly passed a law requiring that Baltimore and the nine largest counties collect money from property owners to address polluted runoff. Republican politicians derided the fee as a “rain tax,” and the voter backlash was fierce enough to get Democratic lawmakers to join them in repealing it.

[Editor’s Note: While called a “fee,” the stormwater charge doesn’t meet the legal definition of a fee, according to the Tax Foundation, since it provides no specific benefit to the individuals paying it. And rain falling onto back lawns and going into streams is also considered stormwater.]

What remains in place is the mandate that the counties reduce their pollution somehow — either with a fee or other municipal funds or grants. However they pay for it, they will need people to do the jobs to complete the task.

Prince George’s County was one of the first in the state to recognize the synergy of underemployed workers and a growing need for more boots on the ground in dealing with stormwater. Under a partnership with a private firm, Corvias Solutions, the county is working to reduce runoff from 15,000 acres worth of pavement and buildings in suburban DC.

In 2012, the nonprofit Alliance for the Chesapeake Bay launched a program to create green jobs, starting with 30 positions in Howard County. The Parks and People Foundation, based in Baltimore, recently started a high-school internship program for green careers, including stormwater work. 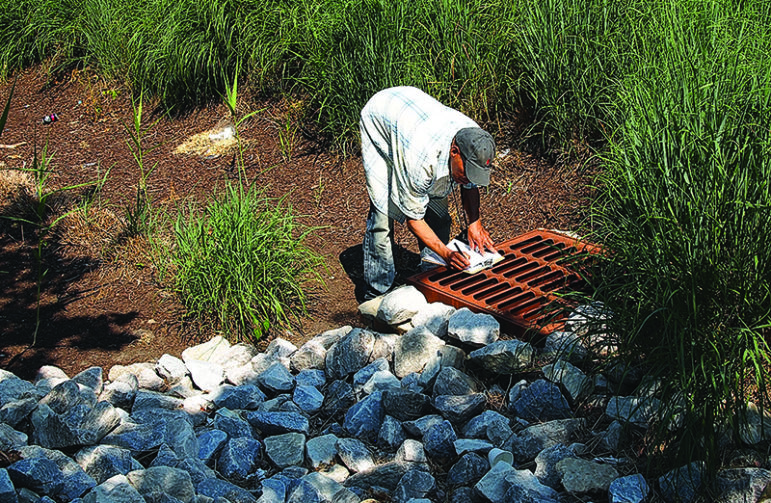 Baltimore has a need for such programs. The row house-dense city has 5,000 acres of impervious cover, said Bill Stack, deputy director of the Center for Watershed Protection, and a former longtime manager with the city Department of Public Works. Stack estimates that the city could have as many as 100,000 “best management practices,” as stormwater control structures are called, with many no longer performing at their best.

A survey of stormwater controls in the city and five surrounding counties found that about a quarter of them are failing, and a third, such as the one at the College of Notre Dame, need some maintenance. The problem is twofold, said Richard Klein, an environmental consultant who conducted the survey. Since 2009, when stormwater regulations began to favor letting rain infiltrate into the ground near where it falls, rather than collecting it in large ponds, the number of practices tripled. But the inspectors’ ranks have not increased.

“You want to slow the water down, but the city was built to move the water fast,” Stack said. “The idea of distributing runoff makes perfect sense, but if you can’t maintain [the structures], then they can’t be part of the solution.”

Since 2015, the Center for Watershed Protection received  a total of $235,000 from the Campbell Foundation, France Merrick Foundation and the Prince Charitable Trusts to develop the full training program that included smaller pilot trainings, stormwater industry partnerships, curriculum development and hands-on labs.

Civic Works trains hundreds of workers for different environmental jobs through its Center for Green Careers; many of the participants previously had run-ins with the law, making it hard to find work or get a license, said Christopher Dews, the program’s training coordinator. There’s so much demand, Civic Works managers said, that they’re hoping to run the program four times a year and train 40 people annually.

The Civic Works stormwater program was funded with $55,000 from the Chesapeake Bay Trust, the Rauch Foundation and the city Department of Public Works. After three weeks of classroom training, Civic Works pays a portion of trainees’ salaries for two months while they work with local employers.

One likely employment destination: the city Department of Public Works.

Since 2015, the 2,000-employee department has developed its own training curriculum, the Water Mentoring Program, which involves two days a week of training for a year.

“The challenge with finding good employees is people understanding the opportunities that are out there, more than anything,” said Rosanna LaPlante, an engineer supervisor in the department.

Two classes of about 15 students each have graduated from the program, and a third is in progress. Once done, they are encouraged to apply for full-fledged city employment, with benefits and salaries. All but one was hired permanently, and he took a job in the private sector. Close to a hundred people apply for the mentor program each year.

On a recent morning, Sule Umoja and Robert Powell were starting their workdays. Umoja, 25, works on a stormwater cleanup crew; he’s been in the program for almost a year. Powell, 22, was part of the first class and is now a best management practice inspector. He said he can see staying 30 years. He just bought his first car.

And now that they spend their time locating debris and trash in waterways and storm drains, they said they have a greater awareness of the environment and pride in helping to improve it.

“The program has basically changed how I live, changed my life,” said Umoja, who worked at a warehouse before being accepted. “I wouldn’t say I have a plan for my future, but I know it’s bright.”

Powell added: “A robot can’t take this over. I’ve got it.”

In-state tuition for illegal immigrants: A dream for some, a nightmare for others