SECTY PETERS TO LOSE HEALTH COVERAGE: An ongoing dispute over two top state appointments will deny at least one of them — a breast cancer survivor — health insurance, according to a spokesman for Gov. Larry Hogan. Acting Planning Secretary Wendi Peters, who was diagnosed with breast cancer in 2012, did not respond to a request for comment. The governor’s spokesman said she has been in remission for five years but added that the lack of health care would deny her access to her doctor.

‘EXTORT & CONSENT:’ Columnist Michael Collins, writing in MarylandReporter, calls for a state prosecutor to look into Senate President Mike Miller’s actions concerning acting Health Secretary Dennis Schrader and the Anne Arundel County Medical Center. Collins writes that there are valid arguments to be made on both sides of the issue on whether it is legal to pay Gov. Hogan’s two controversial secretaries, whom he appointed when the Senate failed to approve them. But things get sticky when the quid pro quo enters the picture. Nobody questions the Senate’s constitutional “advise and consent” role. But should the public accept an “extort and consent” standard? 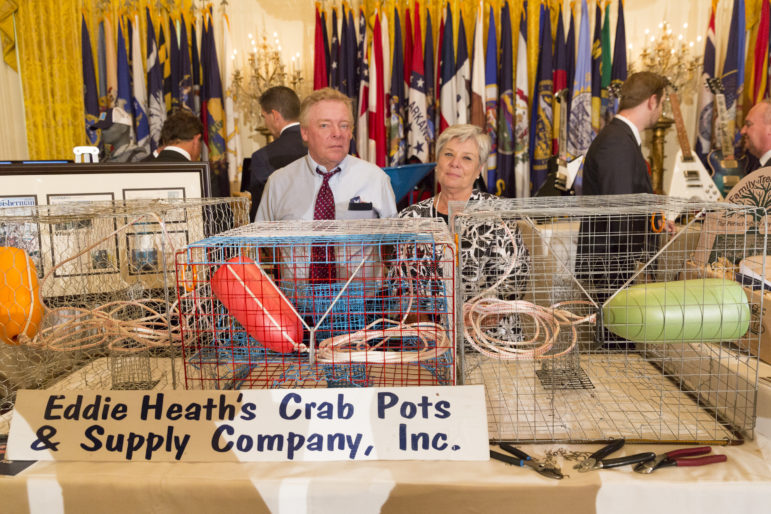 Eddie and Sue Heath in the East Room of the White House Monday. White House photo by Claire Barnett 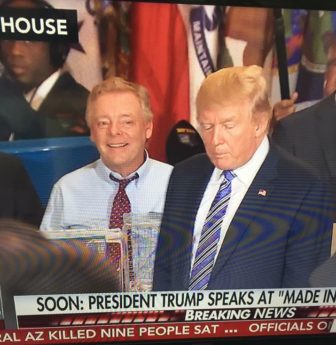 CRABBY WHITE HOUSE: Some of the crabs at today’s Tawes Clam Bake and Crab Feast were probably caught with crab pots made right there in Crisfield by Heath’s Crab Pots and Supply Company. The crab pots were on display at the White House Monday for its Made in America Product Showcase by Eddie and Sue Heath. The White House sent out a photo and a cable network caught Eddie with the President, posted on Facebook.

LOOPHOLE IN POST-LABOR DAY SCHOOL? When Gov. Larry Hogan tightened his executive order to start all public schools after Labor Day, he blocked some educators from wiggling out of the mandate by seeking waivers. But members of the state school board may have stumbled on a loophole, Tim Prudente of the Sun reports.

ROCKEYMOORE PONDERS RUN: Following up on a report in Maryland Matters, the Post’s Josh Hicks and Ovetta Wiggins writes that Maya Rockeymoore, a policy consultant who is married to longtime U.S. Rep. Elijah E. Cummings (D-Md.), says she is weighing a run for Maryland governor in 2018.

BUT WHO WILL RUN FOR Lt. GOV? The field for governor is full and getting fuller. So who is left to run for the No. 2 spot? Josh Kurtz of Maryland Matters has some ideas.

KAGAN CONSIDERS MO CO COUNTY EXEC RACE: Make no doubt about it, state Sen. Cheryl Kagan, a Democrat, loves representing District 17 residents in Annapolis. “I am honored to represent the residents of Gaithersburg and Rockville,” she said in an interview Monday. But she’s also considering some other options in 2018, including the race for Montgomery County executive. Sonya Burke writes the story for MyMCMedia.

Mo Co CANDIDATES: MyMCMedia does a roundup of its own political coverage from the past few months.

HEALTHY VENDING MACHINES: Vending machines at Prince George’s County libraries and government buildings would be required to offer affordable healthy snacks and beverage options, according to a law passed by the County Council on Tuesday in its final session before summer recess, Arelis Hernandez of the Post reports.