HOGAN CLAIMS IMPROPER ACTION BY MILLER: The Hogan administration is charging that Senate President Mike Miller improperly held the nomination of the state health secretary hostage this spring in an effort to force the administration to stop Anne Arundel Medical Center from gaining the authority to perform open-heart surgeries, Michael Dresser of the Sun reports.

DISTRICTING FIGHT BACK IN COURT: Republican voters who claim their constitutional rights were violated when Maryland redrew its congressional districts six years ago return to federal court today to argue that their case should move forward, even as the U.S. Supreme Court weighs a similar dispute involving Wisconsin’s legislative map, Josh Hicks reports for the Post.

DEM MD CONGRESSMEN WARN TRUMP: Democratic senators from Maryland and New York warned the Trump administration Thursday against returning Russian diplomatic compounds seized in retaliation for that country’s interference in last year’s presidential election, reports John Fritze for the Sun. In a letter signed by Sens. Ben Cardin and Chris Van Hollen of Maryland as well as Chuck Schumer and Kirsten Gillibrand of New York, the lawmakers wrote that “the Russian government has done nothing to deserve renewed access to these compounds.”

4 GOVERNOR HOPEFULS APPEAR: Four candidates for the Democratic nomination for governor — state Sen. Richard Madaleno, former NAACP president Ben Jealous, Prince George’s County Executive Rushern Baker and Baltimore County Executive Kevin Kamenetz – appeared before members of SEIU Local 500 on Wednesday night making their pitches on what they would do for progressive causes in Annapolis, Doug Tallman writes in mymcmedia.org. The blog expects to post video interviews with all of the candidates. (Charly Carter of the Maryland Working Families said there was a misunderstanding by the group that the SEIU forum was open to media, and that was why it put out a press release. The event had been planned as a closed event for the union members to assess the candidates.) 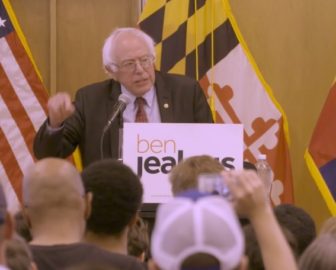 SANDERS TOUTS JEALOUS: In a room filled with young and old, black and white, seasoned political activists and first-timers, the Our Revolution movement took the next step Thursday in its efforts to make former NAACP president Ben Jealous the next governor of Maryland, writes Ana Faguy for Maryland Matters. The standing-room only event at the Silver Spring Civic Center was headlined by Sen. Bernie Sanders (I-Vt.).

PROGRESSIVES SOUGHT: In an interview on the RealNewsNetwork, Charly Carter of Maryland Working Families, at a conference at Coppin State, talks about its success is raising up and getting elected progressive candidates in Maryland.

GALBRAITH TO RUN AGAINST HARRIS: In an account on Ryan Miner’s Miner Detail blog, congressional candidate Allison Galbraith, a small businessowner from Belair, recounts a story of a face-to-face meeting with U.S. Rep. Andy Harris, in which he apparently refused to back gender-neutral health care rates by saying “I don’t think most people would mind if women paid a little more for health insurance” and “Women need services men don’t need.” Harris’s office has not returned inquiries for a response, Miner writes.

MD GOP TARGETS CITY ELECTIONS: The Maryland Republican Party has hired a political operative to focus exclusively on this fall’s municipal elections in Annapolis and Frederick, writes Josh Kurtz for Maryland Matters. Gerry Wosewick, who most recently worked as finance director for the Pennsylvania Republican Party, joined the Maryland GOP as municipal political director in the spring.

Mo Co MAY CUT AT-LARGE COUNCIL SEATS: The Montgomery County panel tasked with reviewing the mechanics of county government is mulling proposals to scrap the County Council’s current setup of four at-large members and five district members, writes Doug Tallman in MyMCMedia. Part of the reason for the change rests in that the council now has three members from Takoma Park: at-large councilmembers Marc Elrich, George Leventhal and Hans Riemer.

COLLEGE PARK MULLS NON-CITIZEN VOTE: Kate Ryan of WTOP-AM reports that College Park’s mayor and council are considering a move to allow residents who are not U.S. citizens to vote in local elections. The move would require a change in the city’s charter, but College Park would not be alone in allowing noncitizens to vote in municipal elections. Other Maryland municipalities that allow this include Takoma Park, Hyattsville, Somerset, Glen Echo, Martin’s Additions and most recently, Mt. Rainier.

ICE’s BIG CHILL: Dominique Maria Bonessi of WYPR-FM reports on what is happening with the Latino and restaurant communities in Baltimore City following ICE warnings at one eatery that sent 30 immigrant employees underground.