Sports betting is the latest frontier for the expansion of legalized gambling in Maryland, panelists at the Maryland Live! casino Thursday made clear.

It is crucial to “get the federal government out of the way” of sports gambling, said Geoff Freeman, president and CEO of the American Gaming Association, which sponsored the event touting the industry’s contribution to local jobs and nonprofits.

Tens to hundreds of millions of dollar are currently being wagered on sporting events in Maryland, and “all of it is being doing illegally,” Freeman said, since Congress banned the practice in 1992. “The demand has never been greater.”

Rob Norton, president of Cordish Global Gaming, which runs the Live! casino next to the Arundel Mills mall, supported the idea “if sports betting is continuing to expand.” It would be “another reason to bring people to the [casino] facilities,” Norton said. (The company recently dropped “Maryland” from the casino’s name.)

Gordon Medenica, director of the Maryland Lottery and Gaming Control Agency, which regulates the casinos and who attended the event, said, “I’d be very supportive of” sports gaming, though the battle is at the federal level.

“The lottery industry is very interested in making this a state issue and not a federal issue,” Medenica said, allowing each state to control the practice, as each do for other gambling. He pointed out that seven states have no lotteries, a major source of revenue for those that do, like Maryland.

Sen. Ed DeGrange, a budget subcommittee chair who represents the Arundel Mills area and served on Thursday’s panel, was interested in the idea.

“I think it’s the next step if the feds change the law,” DeGrange said. “It’s already going on” illegally and if the state were to legalize it, the casinos that are already heavily regulated by the state would be the place to do it.

Del. Frank Turner, D-Howard, vice chair of the House Ways & Means Committee and the floor leader on the legislation that allowed casinos in Maryland, questioned Freeman about the issue and indicated later he was open to sports gaming.

The casino was the third stop on the American Gaming Association Small Business Jobs tour, emphasizing the role of the nation’s 1,000 commercial and tribal casinos in boosting local economies.

About half of casino revenues goes into the Education Trust Fund and smaller slices to support the horse-racing industry and minority businesses.

“We’re one of the few states that has not decreased education funding, but actually increased it,” DeGrange said.

Casinos are expected to generate $546 million for the Education Trust fund in the fiscal year that begins July 1.

Some of the casino taxes are also funneled to Anne Arundel County. The new hotel going up at Live! will also include conference facilities and large meeting rooms that can be used by the public school system and community college.

Asked about the prospects for gambling operations in the region, Freeman said, “I think in this region, what we see right now is what we’ll see for the immediate future.”

There are currently no casinos in Virginia or North Carolina, which are part of the market of the new MGM National Harbor casino on the Potomac River near the Wilson bridge into Virginia.

Maryland was the last of its other neighboring states to add casinos. 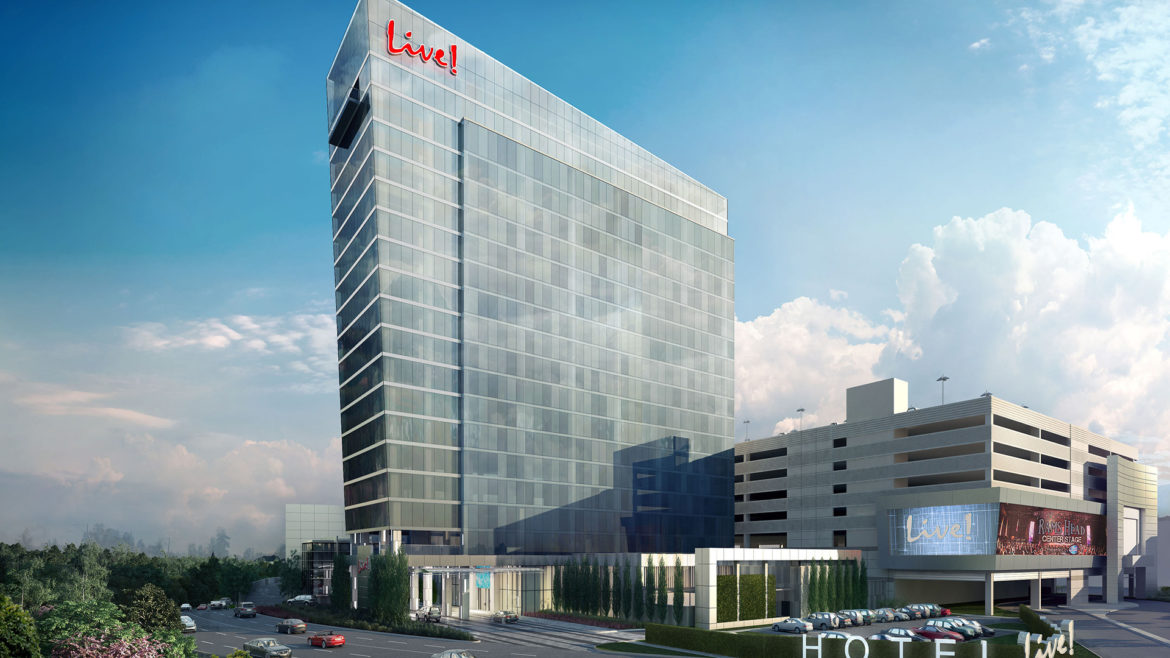 Rendering of the Live! hotel underway at the casino.