HOGAN VETOES SICK LEAVE BILL: Gov. Larry Hogan on Thursday vetoed legislation that would have required employers with more than 15 workers to allow them to earn paid sick leave, setting up a potential veto override fight when state lawmakers return to Annapolis later this year or next, reports Michael Dresser in the Sun. 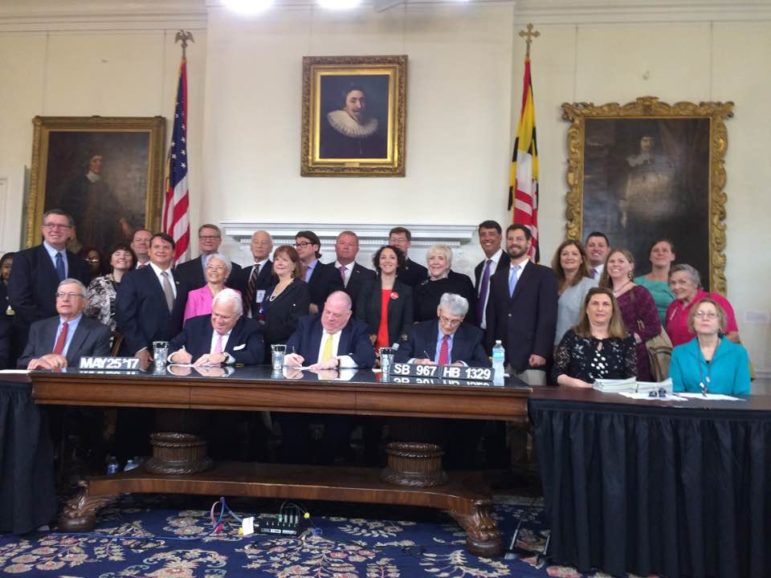 HOPE Act (Heroin and Opioid Prevention Effort) is signed Tuesday, including pay increases for mental health providers, which had been part of Keep the Door Open bill. Photo on Guy Guzzone Facebook page

OTHER BILLS SIGNED: The fate of some of the most consequential measures passed by the General Assembly this year remains up in the air Thursday after Gov. Larry Hogan signed 209 bills in the final such ceremony of the year, reports Michael Dresser in the Sun. The legislation the governor signed included several bills aimed at fighting the state’s opioid addiction crisis, including a measure he proposed that will increase the penalties for distributing fentanyl — an often lethal additive to heroin.

FROSH PUSHES ON PURPLE LINE: Maryland Attorney General Brian Frosh pushed forward with a legal maneuver to attempt to force the federal D.C. District Court judge to issue rulings on the remaining outstanding issues in the Purple Line case Thursday. The state is attempting to have the federal Court of Appeals in D.C. grant a writ of mandamus to force Judge Richard Leon to rule on about two dozen outstanding environmental issues in the case, reports Andrew Metcalf for Bethesda Beat.

CUMMINGS UNDERGOES SURGERY: Baltimore Rep. Elijah Cummings underwent heart surgery on Wednesday and is expected to remain in the hospital for several days, his office said on Thursday. John Fritze of the Sun writes that Cummings was being treated at Johns Hopkins Hospital after what aides described as a minimally invasive procedure called trans arterial aortic valve replacement, used to correct the narrowing of the aortic valve.

FISH INDUSTRY UPDATE: In an article in MarylandReporter.com, Bay Journal reporter Rona Kobell writes that with uncertainty about new regulations and increases in the reported cases of food-borne illnesses, wholesale fish distributors are taking their need for refrigeration to a whole new level — and place. Some  have moved out of the wholesale city markets that used to be gathering places for early morning fish delivery and banter. Others are going out of business, selling out to competitors, or merging to share space and expenses.

PENCE TO SPEAK TODAY:  Vice President Mike Pence will speak at the Naval Academy graduation today, where about 1,000 midshipmen will be commissioned as officers. Meredith Newman of the Annapolis Capital writes that the three-hour ceremony begins at 10 a.m. at Navy-Marine Corps Memorial Stadium in Annapolis.