It happened long ago. Congressman Larry Hogan, Sr. stood alone and defied his party, voting not once but three times to impeach Republican President Richard Nixon. It was the most principled stand taken by a Maryland politician in our lifetimes.

He did what was right, not what was politically correct.

Hogan died last week at 88, eclipsed in the public eye by his son and namesake, the current Maryland governor – an office the father was denied due to his impeachment stance.

Yet it was the father, consigned to the pages of history, who offered a lesson in what it means to take the perilous moral and legal high road rather than the easy partisan and career-advancing low road.

It’s a lesson we must remember given the sorry state of affairs in this country. The rules of fair play, truthfulness and integrity are being tossed aside in the manic quest for political power.

The good of the country is being replaced by the quest for personal gain and prestige.

We can’t afford to forget the Watergate era that so stained our country. For those who were around, it was a terrifying time.

The president had been caught approving and even leading a massive conspiracy to conduct a break-in and robbery; blackmail and bribe witnesses, and cover up the hideous truth.

When his own attorney general refused to knuckle under to Nixon’s demands to crush the Watergate investigation, the president fired this nation’s highest-ranking law-enforcement officer. His deputy also refused to defy his constitutional duty and was sacked, too.

It became known as the Saturday Night Massacre. What a scary time. Many feared the end of American democracy.

Sadly, there are echoes in what’s happening today in and around the White House.

Facts are regularly tossed aside in favor of expedient fairy tales that glorify the president and his cheerleaders. The Big Lie is replacing the uncomfortable truth.

For Larry Hogan Sr., the uncomfortable truth was that his party’s and his country’s leader had lied and hidden what had happened, had violated his constitutional oath and had engaged in illegal acts.

No one is above the law, Hogan announced, not even the most powerful official in the land.

Such independence and gutsy courage were rare in the early 1970s among Republicans. Hogan stood by himself when he announced on the eve of that crucial House Judiciary Committee session in 1974 he would vote to impeach Nixon. No other committee Republican joined him in defying the president.

He knew at the time his impeachment vote might doom his chances of running successfully for governor that November. Sadly, Hogan’s intuition proved accurate.

In September’s Republican primary, Maryland GOP voters turned their backs on the congressman who had sought to remove Republican Nixon. Instead, they nominated a hapless, socially prominent party loyalist, Louise Gore.

It was payback time for Republican ideologues and hardliners, even if it meant obliterating any chance of beating Democratic Gov. Marvin Mandel. Indeed, Louise Gore was crushed in a laugher of a November general election.

Yet the ex-congressman refused to be driven from the political stage. He resurrected his career two years later in a heavily Democratic jurisdiction and served two terms as Prince George’s County Executive.

He did so by capitalizing on voter anger over the high cost of supporting the county’s population boom and suburbanization, which translated into the need for ever-higher property taxes to pay for expanded public services.

As county executive Hogan proved a tough man with a dollar, cutting spending even on schools and libraries, eliminating 3,000 government jobs, holding the line on pay raises and lowering the property tax rate 20%.

No wonder Larry Hogan, Jr. ran for governor in 2014 on the same promises as his dad – lower taxes and fiscal belt-tightening.

To an extent, the son has followed through on those promises. He is in strong position to win reelection in a heavily Democratic state.

But that election is still 18 months away. Hogan Jr.’s biggest test may lie ahead, thanks to an eerily similar situation to the one faced by his father during those Watergate years.

Nixon became a highly unpopular and controversial president, much like Donald Trump. Maryland’s governor has tried to separate his own work from the incendiary comments and actions by Trump and Tea Party congressmen. He didn’t support Trump in the presidential campaign and cast a write-in vote for his father in November.

But Hogan has refused to make a public break with Trump for fear of alienating diehard Republicans he needs to get reelected.

Yet the more radical the Trump administration becomes in the months ahead, the more difficult it could be for Hogan to remain a dispassionate governor.

At some point Republican Hogan may have to forcefully oppose a Republican president, just as his father did in 1974.

This time the issue might be curtailment of the Chesapeake Bay cleanup, elimination of health care coverage for low-paid workers and their families, the loss of tens of thousands of federal jobs in Maryland or violence tied to tough immigration enforcement efforts.

Separating Hogan from Trump may become more and more difficult in voters’ eyes by late 2018. It is one of the few ways he could lose.

Refusing to place party loyalty over what’s best for the country cost Larry Hogan, Sr. the governorship in 1974. He never regretted doing the right thing.

His son may end up facing a somewhat similar predicament.

Will he stay true to his inner moral compass or stick to the Trump-Tea Party line? Far more than Hogan’s reelection may be at stake. 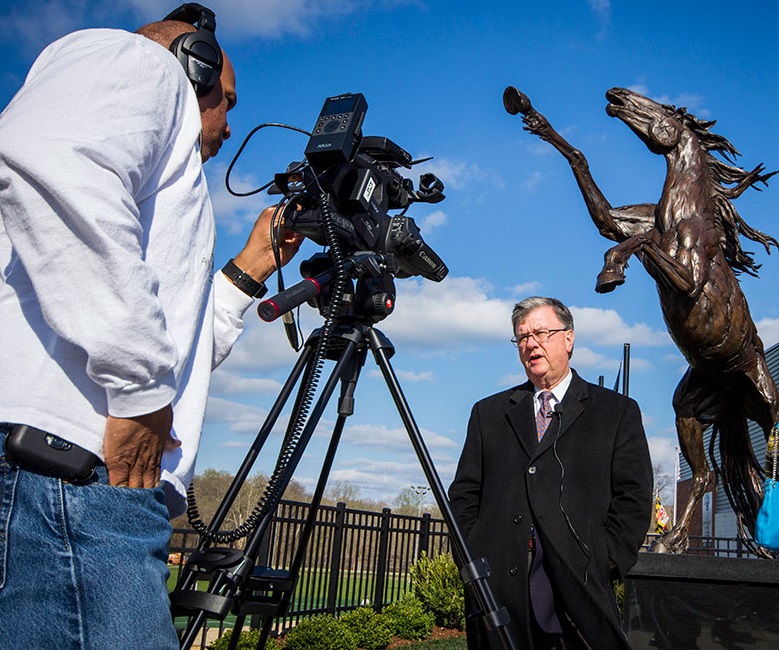