PAID SICK LEAVE: Five years in the making, the Maryland General Assembly on Wednesday passed a widely supported but controversial paid sick leave bill, HB1, which Gov. Larry Hogan has vowed to veto, reports Daniel Menefee for MarylandReporter. Democratic lawmakers are promising an override at the start of the 2018 session, saying they will defend the rights of 700,000 Marylanders to take paid sick leave without fear of losing their jobs.

RX POT MARKETS: Top Democrats in the Maryland legislature have agreed to expand the ranks of medical marijuana growers in the state as part of an overhaul of the burgeoning but beleaguered industry, Fenit Nirappil of the Post reports. Lawmakers are still wrangling, however, over which businesses should have a shot at entry into the lucrative market. Fifteen companies preapproved last year by regulators can open cultivation sites as early as summer if they pass final inspections and background checks. 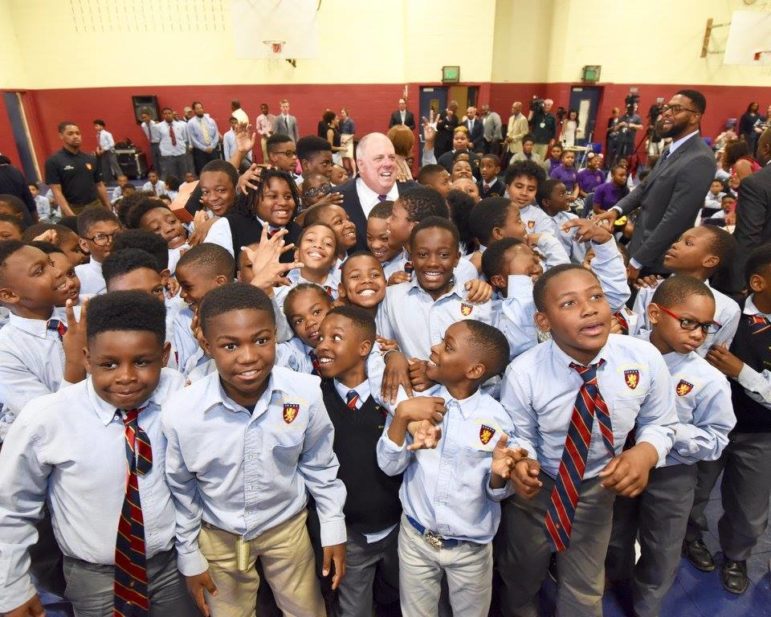 SCHOOL REFORM VETOED: Gov. Larry Hogan vetoed a bill on Wednesday that would set standards for identifying low-performing schools and limit the state’s options for reforming them, reports Pamela Wood in the Sun. Democratic lawmakers plan to override the veto in the coming days.

A SINE DIE PASSOVER SEDER: On the first night of the Jewish holiday of Passover, Sen. Cheryl C. Kagan usually hosts a Seder in her home, surrounded by family and friends. But this Monday night, when the holiday begins at sundown, Kagan will be in Annapolis for sine die, finishing up the General Assembly’s final business on the last day of the 90-day session. Between 6  and 7 p.m., the Maryland Senate and House of Delegates are scheduled to take a break, allowing Kagan and other Jewish lawmakers, along with staffers and lobbyists of all faiths, to participate in an interfaith Seder dinner, writes Ovetta Wiggins.

VIEWS ON BAIL BOND INDUSTRY: The bail bond reform moves are addressed on the opinion pages of the Sun. First, Sean Kennedy, a visiting fellow at the Maryland Public Policy Institute, opines that, “Contrary to what advocates say, the Court of Appeals of Maryland — precipitated by Attorney General Brian Frosh’s October 2016 letter stating that the state’s bail policy violates the constitutional bar on “excessive bail” — did not alter, change or “reform” bail practice. The court abolished it by fiat. Now that the Maryland Legislative Black Caucus has endorsed inaction as its preferred course, allowing the abolition of bail in the state to go forward, it is clear that eliminating bail altogether (and by any means necessary) was always the end sought by bail critics.”

HOGAN GETS HIGH MARKS IN ARUNDEL: Gov. Larry Hogan continues to earn high marks in Anne Arundel County, while President Donald Trump faces more skepticism from local residents, according to a newly released survey. Amanda Yeager of the Annapolis Capital reports that researchers from the Center for the Study of Local Issues at Anne Arundel Community College asked 521 county residents to rate the Republican leaders as part of a wide-ranging poll conducted between March 25 and 30.

HOGAN BLASTS MO CO ED BOARD: Bethany Rodgers of Bethesda Beat reports that Gov. Larry Hogan last week sent Montgomery County education officials a sharply worded letter that urged them to focus on the “series of recent troubling incidents in schools” rather than second-guess his mandate on the school calendar. The March 29 message came in response to the school board’s request that Hogan reconsider an executive order directing schools to begin classes after Labor Day and finish them by June 15. Board members argued that the mandate created a calendar crunch, resulting in lost teacher planning and training time and difficulty identifying potential snow make-up days.

CARDIN WRONG ON GORSUCH: In a column in MarylandReporter.com, Todd Eberly takes on Sen. Ben Cardin and other Senate Democrats’ depiction of Supreme Court nominee, writing that “Cardin’s description of (Neil) Gorsuch as “extreme” and not “mainstream” … Unfortunately for Senate Democrats the claims are unsupportable. All available evidence suggests that Gorsuch is very much in the mainstream and that so-called “extremists” like Justice Alito are anything but extreme — unless one’s definition of extreme is any conservative judge.”

KAMENETZ BANS IMMIGRANT STATUS CHECKS: Baltimore County Executive Kevin Kamenetz signed an order Wednesday prohibiting county law enforcement from inquiring about the immigration status of anyone they encounter. The order also says police and sheriff’s deputies cannot hold detainees past their release dates at the request of federal deportation agents, unless those agents have presented a judicial order, Ariel Hernandez and Josh Hicks of the Post write.

INTERNET PRIVACY: State lawmakers introduced a bill Tuesday that would prohibit Internet service providers, such as Comcast and Verizon, from selling consumers’ private information. The measure would reverse the effects in the state of a congressional resolution President Donald Trump signed Monday, reports Rachel Baye for WYPR-FM.

FORMER JUDGE CHASANOW REMEMBERED: standing-room-only crowd of Maryland’s political and legal community came to a Greenbelt synagogue Wednesday afternoon to memorialize former state high-court judge and mediator Howard S. Chasanow, 79, whom the rabbi recalled as a modern-day Aaron – more beloved than his brother Moses for having shown greater interest in resolving disputes than in handing down the law, reports Steve Lash for the Daily Record.