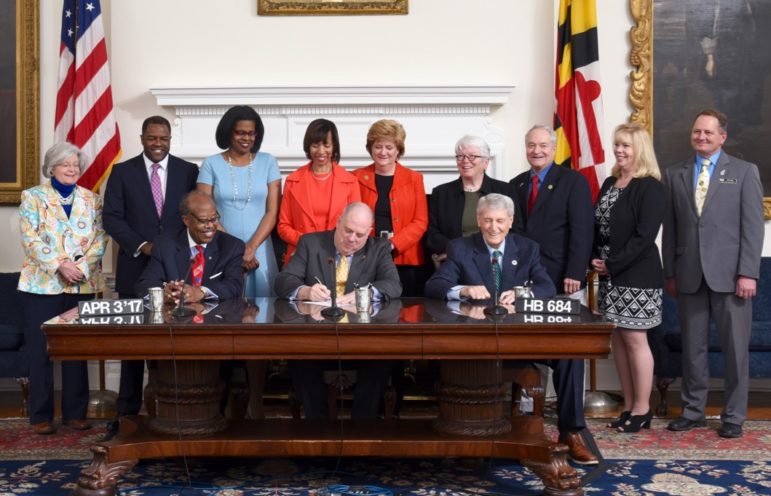 ED FUNDING: Gov. Larry Hogan signed a bill Monday to give city schools and other jurisdictions with declining enrollment extra money each of the next three years, Erin Cox of the Sun reports. The Annapolis bill signing marked the culmination of a months-long negotiation with Democrats to help stave off future funding cuts to struggling school districts. Fostering the compromise “took a lot of work by a lot of people,” the Republican Hogan said. The article is topped by a short video.

TRUST BILL: Supporters and opponents held separate rallies Monday to call attention to legislation before the General Assembly that would limit Maryland law enforcement’s cooperation with federal immigration authorities, writes Ian Duncan for the Sun. The bill, known as the Trust Act, passed the House of Delegates but has stalled in a state Senate committee. Republican Gov. Larry Hogan has said he would veto it. A Sun video tops the story.

RAPE KIT BILL: State lawmakers are poised this week to pass legislation that will require police in Maryland to keep rape kits for 20 years. But what to do with the kits remains a topic of considerable debate, reports the Sun’s Catherine Rentz. Advocates for victims and others say testing all rape kits is the right thing to do for victims, and will get more rapists off the streets. But opponents of that approach, including Baltimore County’s top prosecutor, say testing every kit would be costly and might not do anything to advance certain cases, particularly those in which the alleged assailant’s identity is known.

ANTI-ABORTION RALLY: Opponents of abortion rallied Monday night in Annapolis, renewing, among other requests, a call for Planned Parenthood to be defunded as government support for the family planning organization rises again to the forefront of national debate, Amanda Yeager of the Annapolis Capital writes. Across the street at the State House, legislation that would direct state money to fill the gap if federal funds for family planning services are cut is awaiting a decision from Gov. Larry Hogan, who has until the end of Wednesday to sign, veto or let the measure pass into law without his endorsement.

HOGAN WITHDRAWS DHMH NOMINEE: Gov. Larry Hogan has withdrawn the nomination of Dennis R. Schrader as secretary of Health and Mental Hygiene, a spokesman said, after concluding that the Senate Executive Nominations Committee would not vote on the appointment before the legislature adjourns April 10, Ovetta Wiggins of the Post reports.

RX POT AS HEROIN TREATMENT DROPPED: Supporters of a bill that would increase the number of licenses Maryland will issue to growers of medical marijuana dropped a proposal Monday that would have allowed the drug to be used to treat heroin addiction, Michael Dresser of the Sun reports. After the provision was eliminated, the House of Delegates rejected a flurry of Republican amendments to the legislation and gave it preliminary approval.

INTERNET PRIVACY: A late attempt to introduce an Internet privacy bill on Monday illustrated a common complaint from the Republican minority this session: Democrats continue to make Washington politics their priority, reports Daniel Menefee for MarylandReporter. House Majority Leader Bill Frick asked the House of Delegates to allow introduction of an emergency bill to prevent Internet service providers from selling or sharing personal information without notification and consent of their customers.

EDUCATION SOLUTIONS: Del. Eric Ludtke, in a column for Maryland Matters, writes that, “One of my many frustrations with the Hogan administration — from a good governance perspective and not a political one — is that this complexity seems lost on him and his education policy staff. The governor has repeatedly endorsed simplistic solutions to the complex problems in our schools and railed about them in press conferences, with little attention to the reality on the ground in our school systems.”

KEEP ANTIBIOTICS EFFECTIVE: RNs and faculty members of the University of Maryland School of Nursing Pat McLaine and Robyn Gilden, in a column for MarylandReporter, write that Maryland residents — including its farmers — have lots to lose if we reach a future where there simply aren’t any antibiotics left to treat our sickest patients. Unfortunately, we all seem headed in that direction. Even when used prudently, the use of antibiotics carries some risk that bacterial resistance to them will develop and spread.

NEEDLING THE GOVs: D.C. Mayor Muriel Bowser took a rare public swipe at the governors of Virginia and Maryland last week. She faulted them for studying Metro for the umpteenth time rather than finding it the money that everyone knows it needs. Bowser’s frustration is justified — but her decision to voice it may do more harm than good, reports Robert McCartney for the Post. In her annual State of the District speech on Thursday, Bowser needled Virginia Gov. Terry McAuliffe and Maryland Gov. Larry Hogan for backing the creation of a new panel to conduct yet another in-depth investigation of the transit system’s problems.

FIVE GUYS: In a column for Maryland Matters, Josh Kurtz highlights five up-and-coming and “intriguing” young guys — all guys — to watch as they begin to get their feet wet in politics in Maryland.

CARDIN BACKS GORSUCH FILIBUSTER: Sen. Ben Cardin said Monday he will support a filibuster of President Donald Trump’s Supreme Court nominee, Judge Neil Gorsuch – arguing Republicans are responsible for “making this process untenable,” reports John Fritze in the Sun. In a series of posts on Twitter, the Maryland Democrat said he will vote against a cloture motion to end debate on Gorsuch’s confirmation. The announcement came soon after media whip counts indicated Democrats had the votes to sustain a filibuster.