CORRECTION: The Maryland House of Delegates on Tuesday passed gave preliminary approval to a Senate bill that would fill any funding shortfalls to Maryland Public Television if the Trump administration succeeds in major cuts to the Corporation for Public Broadcasting. Final vote on, SB1034, was delayed until Thursday.

The public is not generally aware that MPT is a state agency that grew out of the Department of Education.

The measure was adopted two hours after the House Appropriations Committee voted 20-4 to send the bill to a full vote in the House. Four Republicans voted against the measure because it comes with a funding mandate.

The committee amendment struck specific language in the bill that tied $500,000 in additional general funds for MPT to livestream two weeks of floor debate in the House and Senate.

Instead, the $500,000 would be an annual appropriation in the “interest of transparency and unbiased reporting.”

“It’s to keep them solvent and keep them continuing to do the great work they do,” said House Appropriations Chair Maggie McIntosh. “This is a great bill in what it means for Maryland Public Television.”

Larry Unger, president and CEO of Maryland Public Television, told MarylandReporter.com that the additional $500,000 would be used to provide the livestreaming regardless of the committee amendment.

“We think it’s an important thing to do and it’s what MPT should be doing,” Unger said.

Jeff Ghrist, R-Caroline, a member of the Appropriations Committee, said he voted against the measure because of the spending mandate. He said any support for MPT should go through the normal budget process.

“I’m not against the state funding public television,”Ghrist said. He said he was an avid viewer of Farm and Harvest and often enjoyed watching it with his son.

“I see the value in public television but I think the additional amount they’re asking for needs to be in the budget each year,” Ghrist said. “I don’t think we need to pass a bill that creates a funding mandate over time [but] I also don’t think any committee in good conscience would cut money to public television.”

In a statement, Amelia Chasse, deputy communications director for Gov. Larry Hogan, said the bill did little to further transparency and that the legislature has failed to move the administration’s Legislative Transparency Act of 2017. It would have provided $2.2 million to livestream the floor debates for the entire 90-day session, similar to how committee hearings are livestreamed online from the Maryland General Assembly website.

“The governor proposed real transparency legislation that would actually open up state government and make the legislative process more accessible to citizens,” Chasse said. “The governor’s proposal would livestream both houses for the entire session – something all but seven states do – and he fully funded it in his budget. The governor’s bill is currently stalled in the House committee.”

Chasse said the Senate Bill was “merely a mandate in sheep’s clothing so some legislators can pretend they support transparency.”

Chasse said any shortfalls in federal funding to MPT would be addressed when it happens.

“If any of these [federal] budget proposals become law, or even draft legislation, we will take a serious look at how to address them during our own budget process,” she said.

Maryland lags behind some states on school spending 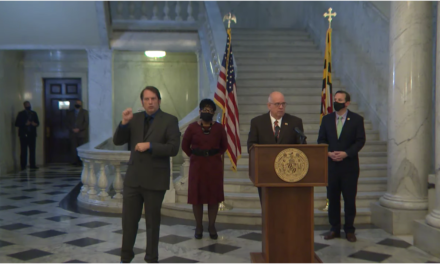