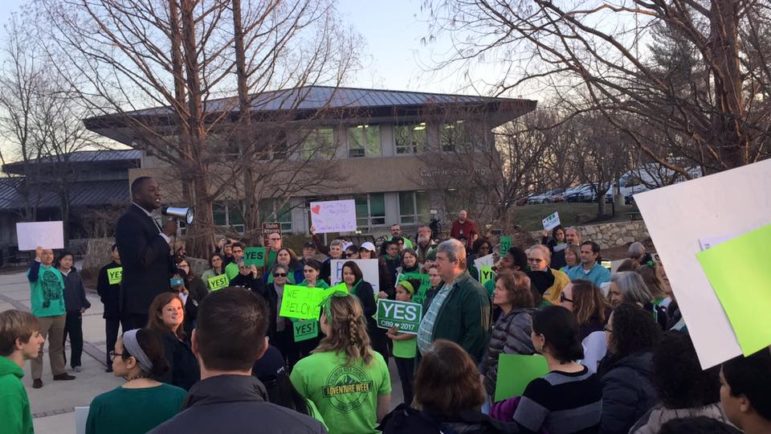 HO CO BACKS ‘SAFE’ PLACE TAG: The Howard County Council voted 3-2 Monday night to declare the Maryland suburb a safe and supportive place for undocumented immigrants — but not a sanctuary, the Post’s Bill Turque reports. The bill’s co-sponsors dropped the hot-button word to preserve what they regarded as the measure’s central point: to put the county on record affirming that residents will not be targeted by local law enforcement because of their immigration status.

HOGAN LOBBIES OFFICIALS: Gov. Larry Hogan is pressing local politicians to support his effort to overturn a law that requires transportation projects to be ranked. The Sun’s Pamela Wood writes that Hogan sent a letter to more than 250 county executives, county council members and mayors across the state last week calling the measure a “severely flawed and misguided bill” that needs to be repealed.

CHARTER SCHOOL BILL DRAWS FOES: Legislation from Gov. Larry Hogan would significantly relax restrictions on Maryland charter schools, but has already drawn strong criticism from the state teachers’ union, Jeremy Bauer Wolf reports for the Frederick News Post. Hogan’s proposal would provide charter schools a degree of freedom over their operations and staffing that is so far unprecedented in the state. It also would channel state funding directly to some charter schools. Currently, local boards of education pay for charter schools in their respective school districts.

SECRET INQUIRY: The costs of hiring a lawyer as part of ethics inquiry involving Del. Dan K. Morhaim, D-Baltimore County, remain secret under a confidentiality requirement that protects the work of the Maryland Joint Committee on Legislative Ethics, Bryan Sears reports for the Daily Record. State officials have repeatedly declined to name the attorney or firm hired or the financial arrangements. An assistant attorney general assigned to the General Assembly has denied a Maryland Public Information Act request filed by The Daily Record seeking the information.

CENSORSHIP IN GOVERNOR’s OFFICE? The editorial board for the Baltimore Sun takes Gov. Larry Hogan to task for what it says is stifling debate in deleting public comments from the governor’ Facebook page. The governor’s office contends it is just deleting repetitive comments from a well-coordinated campaign.

GROWING LIST OF OBJECTIONABLE PLATES: Colin Campbell of the Sun reports on the state’s 20-year-old “Objectionable Plate List,” the list of vanity license plates rejected by the state of Maryland that grew to more than 4,900 last year, according to the Motor Vehicle Administration. It’s home to the dirtiest combinations of letters and numbers Marylanders could think up for their car bumpers.

FROSH JOINS 15 STATES TO STOP BAN: Democratic attorneys general in Maryland and 15 other states signaled their support Monday for a lawsuit in a federal appeals court over President Donald Trump‘s temporary ban on travel from several predominantly Muslim countries, writes John Fritze for the Sun. The case, pending before the 9th Circuit Court of Appeals, led to a temporary halt of Trump’s executive order over the weekend. The Democratic attorneys general filed an amicus brief.

CITY COUNCIL BACKS WAGE HIKE: A majority of the Baltimore City Council — including Council President Jack Young — said Monday they are backing a $15 minimum wage for workers in Baltimore. When asked, Young and 10 others on the 15-member council said they support legislation that would raise wages for the lowest-paid workers in the city. A similar proposal was narrowly defeated without Young’s support last year, Yvonne Wenger and Luke Broadwater of the Sun report.

PUGH ON STATE CENTER: Baltimore City Mayor Catherine Pugh said she’s had conversations with developers about potential alternatives to the current redevelopment plans for State Center, including whether Metro West might be a viable option. During a wide-ranging interview with Adam Bednar of the Daily Record last Thursday, Pugh discussed her position on the long-stalled redevelopment of a state office complex in the city’s Madison Park community and potential location.

CARDIN ON TRUMP’s IMPACT: Tom Hall of WYPR-FM speaks with U.S. Sen. Ben Cardin in this 45 minute interview that covers President Donald Trump’s agenda — in particular changes to the Affordable Care Act — and how it could impact Maryland.

RETIRED JUDGE BOONE DIES: A. Gordon Boone Jr., a retired Baltimore County District Court judge recalled for his wit and colorful courtroom style, died of complications from dementia Sunday at the Masonic Home of Maryland. The Freeland resident was 83. He was the son of A. Gordon Boone, a Towson attorney and former speaker of the Maryland House of Delegates, Jacques Kelly reports in the Sun.