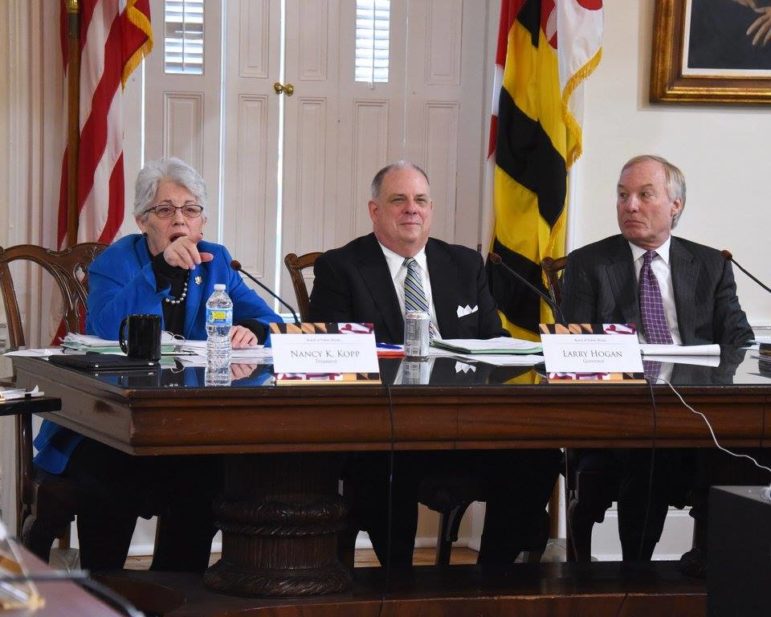 HOGAN PUSHES CHARTER SCHOOLS: After a failed attempt in his first year in office, Gov. Larry Hogan (R) is trying once again to increase the number of charter schools in Maryland by proposing to loosen the rules that govern the publicly funded, independently run schools and create an independent body with the power to authorize such institutions, Ovetta Wiggins of the Post reports.

TRANSPORTATION SCORING: Senate President Mike Miller said Wednesday that he’s open to making changes to a transportation scoring law detested by Gov. Larry Hogan, but hasn’t heard any ideas for a compromise from the administration, Ian Duncan of the Sun reports.

BAIL BOND INDUSTRY DONATIONS UP: The bail bond industry poured $87,000 into the campaign coffers of Maryland politicians in 2016, according to a report released Wednesday by Common Cause Maryland, reports Ovetta Wiggins for the Post. The influx of donations — which Common Cause said was significantly larger than in previous years — came as the General Assembly prepared to consider whether to alter or eliminate cash bail for most poor defendants. The largest portion — $21,000 — went to Sen. Bobby Zirkin, chairman of the Senate Judicial Proceedings Committee that will play a key role in deciding the fate of the state’s money-based bail system.

ACA, STATE BUDGET & TRUMP: The vice chair of the Maryland Senate’s Budget and Taxation Committee says the state’s hospital system could be “thrown into disarray” by the repeal of the Affordable Care Act. Sen. Richard Madaleno commented after his committee got a briefing from the state’s Department of Legislative Services, a non-partisan office that generates reports on the fiscal impact of government policies, Kate Ryan of WTOP-AM reports.

JUDICIARY CUTS: Court of Appeals Chief Judge Mary Ellen Barbera voiced her willingness Wednesday to cut $6.5 million from the judiciary’s proposed $576.4 million budget for fiscal year 2018 – but not at the expense of cybersecurity, courtroom safety or the quality of service provided by circuit court clerk’s offices, Steve Lash of the Daily Record reports.

MORE CHOICES: In an op-ed for the Sun urging that central committees offer the governor more than one choice to fill a General Assembly vacancy, attorney David Loveland writes that the Baltimore City Democratic Central Committee has recommended to Maryland’s governor only one person to fill each of two open delegate seats (one of which was created because a criminal indictment was filed against the original appointee): Both men were chosen after a hasty, opaque process. Gov. Larry Hogan asked for a background check on each and was promptly criticized for the optics of it. One might wonder how this request could be considered unreasonable after the city committee’s first choice was charged with making illegal campaign contributions.

STATE 7th IN LEED RANKING: Maryland ranked seventh in the nation in terms of Leadership in Energy and Environmental Design, or LEED, green building, Adam Bednar of the Daily Record writes. The U.S. Green Building Council released its national rankings on Wednesday. The organization called Maryland one of the leaders in environmentally sound building in 2016, citing the 2.33 square feet of certified space per resident and 104 LEED-certified projects.

FROZEN BAY BUCKS? Federal money awarded to the Chesapeake Bay Trust and distributed in Anne Arundel County for environmental projects could be frozen after President Donald Trump’s administration issued a halt on Environmental Protection Agency grants and contracts.The Chesapeake Bay Trust officials want clarification from the federal government on whether the EPA decision will affect grants awarded or would stop new grants.

SHOWDOWN OVER SANCTUARY CITIES: The executive order signed by President Donald Trump on Wednesday to strip federal funding from jurisdictions that have declared themselves sanctuaries for undocumented immigrants drew both praise and alarm in Maryland. Luke Broadwater and Yvonne Wenger of the Sun reports that the order likely sets up a showdown between the Trump administration and local governments in a state where seven colleges have declared themselves sanctuary campuses, lawmakers in Howard County want to declare a sanctuary county, and police generally don’t ask the people they stop about their immigration status.

PUGH UNCONCERNED BY CHARGES: Luke Broadwater of the Sun reports that Baltimore Mayor Catherine Pugh said Wednesday she was not concerned about charges filed by state prosecutors against two of her campaign donors. “I don’t talk about campaigns here,” Pugh told reporters at City Hall after the Board of Estimates meeting. “We did everything by the book. Our campaign report is public and open to scrutiny.”