Maryland’s legislative leaders are getting pressure to fix their approach to spending not just from Republican Gov. Larry Hogan but from their own top budget expert, Warren Deschenaux.

In his analysis of the $43.5 billion state budget Hogan sent to the legislature last week, Deschenaux told legislators Monday, “This is another kick-the-can-down-the-road budget,” putting off hard choices about future spending.

Deschenaux, who’s been analyzing state spending for 18 years, said, “we’ve settled into a pattern that the world of 2008 is going to reappear,” and revenues are going to grow by 5% a year to match projected spending driven by formulas and mandates.

As he has done for years, Deschenaux pointed to a chart that shows a balanced budget for fiscal 2018, but then a widening gap between spending and revenue in future years. 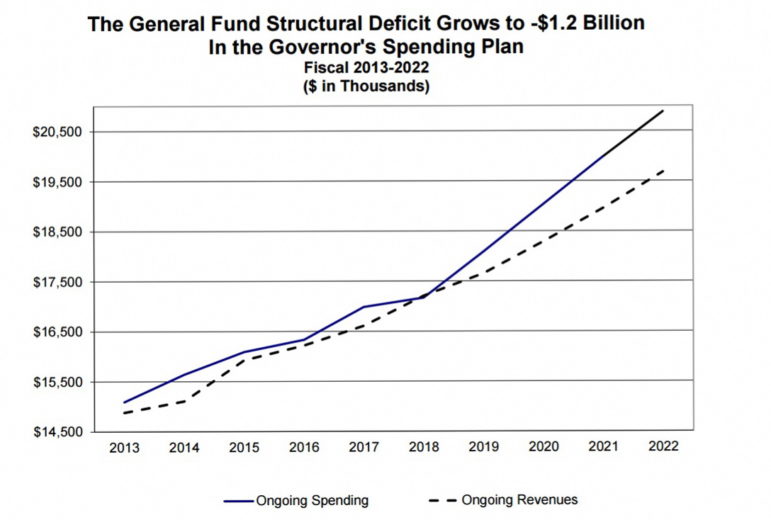 “I think we need to fix the out-years spending pressure,” Deschenaux said in response to a question from Sen. Andrew Serafini, a Republican budget hawk, who suggested reducing spending growth to 2% or 3%.

“That would go a long way” to change the spending curve, said Deschenaux, who now heads the nonpartisan Department of Legislative Services in addition to his longtime role as head of policy analysis.

Deschenaux again highlighted the problem with Maryland’s continuing structural deficits. He did the same thing in November when he told the Spending Affordability Committee that they needed to “get real” about matching spending to revenue growth.

Nerds can’t do it

“It’s not up to the nerds to do this,” he said. “It’s up to the political leadership.”

Gov. Hogan has proposed changing the spending mandates that control what he can do with 83% of the general funds raised from Maryland taxpayers.

“The measure [Hogan] proposed is fundamentally weak,” only dealing with 4% of the budget, Deschenaux said. “A more vigorous and comprehensive approach is called for.”

In rolling out his spending plan last week, Hogan emphasized that he was actually spending less of the general fund budget — about $17 billion — while curing a deficit, funding all the mandates, and cutting few programs.

“The governor didn’t do bad,” Deschenaux said. “But he did not alter the fundamental structural relationships.”

Hogan balanced the budget by taking $170 million of the rainy day fund, which he had built up in this year’s budget in case revenue dipped, which eventually did occur.

In the fiscal briefing report prepared by a dozen DLS staff members, they identified 11 “potential legislative issues” that needed to be resolved.

They are especially concerned with actions that the new Trump administration may take. The Hogan budget “leaves the state vulnerable to expected federal cost containment actions, including hiring freezes, spending reductions and the repeal of the Affordable Care Act.”

“We think it’s underfunded,” Deschenaux said of Medicaid. The expansion of coverage to 312,000 people under Obamacare (the ACA) is 90% subsidized by the federal government — and much of that might disappear — costing an additional $1.2 billion.

Analysts also believe that there is not enough money in the Transportation Trust Fund to fund operating costs, local road aid and all the road projects Hogan has promised.

Cut in payment for PG hospital

House Speaker Michael Busch was particularly upset that a $56 million payment for building a new Prince George’s County medical center was cut from the capital budget. The Hogan administration believes that the payment can be put off because of delays in construction of the new regional hospital.

“That’s an awful big can to kick down the road,” Busch said.