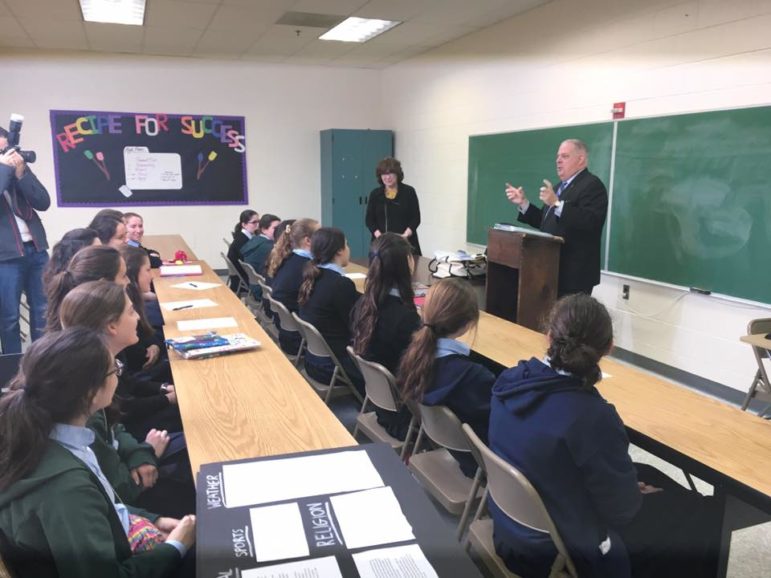 NORTHROP DEAL: A Maryland legislative panel voted unanimously Tuesday to approve a $20 million grant for defense giant Northrop Grumman, but not before top lawmakers scolded Gov. Larry Hogan (R) and his administration for not collaborating more with the General Assembly on the deal, Josh Hicks reports for the Post.

BUSCH’s HEALTH: House Speaker Michael E. Busch released a statement Tuesday saying he’s being treated by a doctor after a prescription caused gastrointestinal bleeding, writes Erin Cox in the Sun. “My doctor and I have taken the appropriate steps for a speedy recovery,” the statement said. The speaker issued the same statement to The Daily Record last week.

BALTIMORE COUNTY POLITICS: The Sun editorial page says Gov. Larry Hogan’s photo-op-heavy foray into Baltimore County Tuesday stands in stark contrast to his ongoing feud with Baltimore County Executive Kevin Kamenetz, which has entered (and perhaps denied) yet another arena. An indoor equestrian facility long planned for the Center for Maryland Agriculture and Farm Park in Hunt Valley was put on hold last week by the Board of Public Works despite a favorable recommendation from the Maryland Department of Natural Resources.

RETAINING NEW TEACHERS: Maryland schools are often touted as some of the best in the country, but beneath the surface, it is becoming increasingly difficult to retain experienced teachers during the first few years into the profession despite receiving relatively high pay among teachers nationwide, Katishi Maake of Capital News Service reports in MarylandReporter.com.

TOO MANY CASINOS? What does the arrival of the MGM National Harbor casino mean for the five casinos already operating in Maryland, and for the hefty stream of revenue the state has come to count on? Sheilah Kast of WYPR-FM speaks with Washington Post reporter Michael Rosenwald  and Harford Community College professor James Karmel on whether there is a glut of casinos in Maryland.

WATERMAN STEPS DOWN AS MD GOP CHAIR: Christopher Kersey of the Easton Star Democrat writes that  Queen Anne’s County resident Diana Waterman will leave her job as chairman of the Maryland Republican Party next month after successfully pulling the organization out of debt, helping to add Republicans to the state legislature and helping to elect a Republican governor.

CARDIN TROUBLED BY TRUMP PICK: Sen. Ben Cardin, the top-ranking Democrat on the Senate Foreign Relations Committee, said Tuesday he is “deeply troubled” by President-elect Donald Trump’s pick to lead the State Department — but he did not signal whether he would oppose or support his confirmation. Trump announced Tuesday that he intends to nominate Rex Tillerson, the chairman and CEO of ExxonMobil, as the nation’s top diplomat, John Fritze of the Sun reports.

UnAUGURAL CONCERT PLANNED: Sen. Cheryl Kagan, progressive state senator from Montgomery County, is organizing a concert on Inauguration Day to raise money for liberal causes she thinks will be threatened under the administration of President-elect Donald Trump, Josh Hicks of the Post reports.

PEREZ TO CHALLENGE ELLISON: Labor Secretary Tom Perez of Montgomery County will launch a campaign to be Democratic National Committee chairman this week, becoming the first serious challenger to Rep. Keith Ellison, D-Minn., for a lead role in rebuilding a shell-shocked party.

HOWARD TEACHER DISCIPLINED: A Howard County high school English teacher was placed on administrative leave last week after assigning students to write a “fun” slave song as part of a lesson on abolitionist Frederick Douglass — the latest in a string of racially charged incidents in the suburban school system, writes Erica Green in the Sun.

PG LIQUOR CHAIR RESIGNS: The chairman of the Prince George’s County liquor board who was arrested on drunken driving and other charges after leaving the MGM National Harbor casino on opening night has stepped down from his position, Lynh Bui and Arelis R. Hernández of the Post report.

WHITE NATIONALIST POSTERS AT UM: White nationalist posters have been reported to the University of Maryland Police Department twice in 24 hours, report Ellie Silverman and Talia Richman in the Diamondback. Sunday night, University Police responded to a call around 11:30 p.m. regarding posters glued to Marie Mount Hall’s doors. Monday morning, police were called to Tydings Hall. The posters have since been removed.