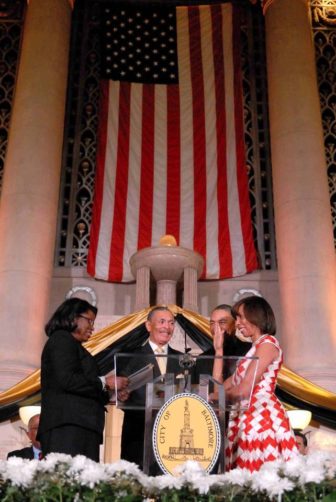 State Sen. Catherine Pugh, right, is sworn in as Baltimore mayor as her brothers hold a bible. Governor’s Office photo.

PUGH BECOMES 50th MAYOR OF BALTIMORE: Baltimore Mayor Catherine E. Pugh made unity the central focus of her inauguration Tuesday. The Democrat was surrounded on stage by leaders from across the state, including Republicans and a past rival. Pugh, 66, vowed to be “a mayor for all” who will channel investment into long-neglected communities, work to reduce crime and foster thriving schools, Yvonne Wenger and Luke Broadwater report in the Sun.

SRB’s TARNISHED LEGACY: Political prognosticator Barry Rascovar assesses the legacy of former Baltimore City Mayor Stephanie Rawlings-Blake. It started with such bright promise,  yet as she leaves the mayor’s office there’s a deflated feeling that she failed to live up to expectations. She came into the mayor’s job with an ideal pedigree and even did much to aid Baltimore City. Sadly, all this was overshadowed by the mayor’s standoffishness, her failure to enlarge her inner circle of advisers and her arrogant behavior on the day when civil unrest broke out in Baltimore in 2015.

HOGAN OVERHAULS CONTRACT PROCESS: MarylandReporter.com is reporting that the Hogan administration has unveiled a major overhaul of how billions in state contracts are bid and awarded, along with a revamping of hundreds of regulations designed to making doing business in Maryland easier. Few of the changes have broad impact on the public at large, but they impact hundreds of state contractors and thousands of professionals, such as a real estate agents.

WA CO LAWMAKERS PREP FOR SESSION: Education, transportation, economic development and urban renewal ruled the agenda for Washington County’s legislators Tuesday, as they navigated a marathon day of meetings with local governments and other agencies in preparation for the upcoming session of the Maryland General Assembly. Tamela Baker of the Hagerstown Herald Mail writes that looming over all those issues is the state budget, which is suffering from the perennial problem of a structural deficit.

TAX CUTS FOR 2 CASINOS AS NEW ONE OPENS: Two Maryland casinos will keep a higher share of slot machine revenue when MGM National Harbor opens this week, in a deal state lawmakers made years ago to reduce their taxes once the added competition enters the market, the AP is reporting in the Daily Record. No one knows how Maryland’s gaming revenue will change once MGM opens, but lawmakers are hoping to collect more money overall for the state’s Education Trust Fund and other programs that benefit from this income.

FREDERICK TO BENEFIT FROM PRE-K FUND: A majority of Maryland’s school districts, including Frederick County, will benefit from a $15 million federal grant to help provide preschool across the state, Jeremy Bauer-Wolf of the Frederick News Post reports.  Democrats in Maryland’s federal delegation, including U.S. Sens. Ben Cardin and Barbara Mikulski, announced the funding Tuesday in a news release. It did not specify how much money Frederick County would receive.

ONE OF 10 BEST STATES TO LIVE: Maryland was classified as 8th among the 10 best states to live in by USA Today. Massachusetts was tops, Virginia was 10th, and the others in order were Connecticut, New Hampshire, Minnesota, New Jersey, Colorado, Vermont and Hawaii.

MO CO OPPOSES STATE SICK LEAVE BILL: The Montgomery County Council on Tuesday opposed potential statewide legislation that would mimic the county’s Sick and Safe Leave legislation, but would limit the companies that would be required to provide the benefits, Doug Tallman of Bethesda Beat writes. The county’s legislation covers all employers, although the amount of paid leave varies depending on the size of the business. The county’s law took effect Oct. 1.

PG TO PROBE VEHICLE USE: The Prince George’s County Council on Tuesday agreed to create a panel to examine its policy of assigning government-owned vehicles to lawmakers for business and some personal use, which appears to be far more expansive than policies in nearby jurisdictions. The proposal follows the arrest last month of council member Mel Franklin, charged with driving under the influence after his county-issued SUV crashed into the back of a sedan, sending two people to the hospital. Franklin also was involved in two collisions while driving a county-issued vehicle in 2012, Arelis Hernandez of the Post is reporting.

TRUMP TO ATTEND ARMY-NAVY GAME: President-elect Donald Trump will attend the Army-Navy football in Baltimore on Saturday, marking the Republican’s first visit to the city since September, John Fritze of the Sun is writing. The New York businessman will honor the tradition of sitting on the Army side of the field for half the game and the Navy side for the other half, a Trump spokesman told reporters on Tuesday.